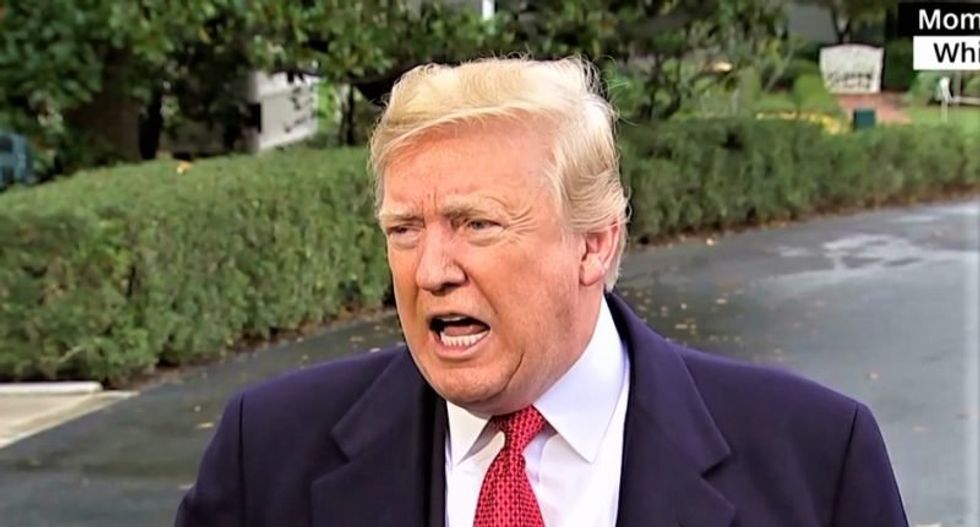 This year, Democrats managed to win back control of the House for the first time in nearly a decade. Predictably, many on the Right were dismayed, both those who were expecting the loss and those who had been duped by President Donald Trump's confident prediction that there would be a "red wave."

Just more than a week out from the Democrats' victory, here are some of the craziest reactions from conservatives to the news they would no longer hold unified control of the federal government:

This week, Trump sat for an interview with the conservative Daily Caller. When asked by reporters Saagar Enjeti and Benny Johnson whether the House loss was of any significance to him, he immediately downplayed it — and then said he was the reason things weren't even worse.

"I think I did very well," said Trump. "Because if you look at — Obama was 60-something odd House seats and lost seven Senate seats. So we picked up three or four Senate seats depending on how it all goes — it's a big pickup. In fact, they say in 80 years I think the presidential party's only picked up two Senate seats, I picked up three. I mean, assuming that they don't do any further shenanigans in Florida." (Trump only maintained control of the Senate because almost every incumbent this year was a Democrat).

Trump then went on to say that, far from causing the GOP defeat, it actually would have been worse without him. "I mean, the truth is, every place I went, we either won or did well or did really well." (Trump lost in several places he held rallies, including Arizona and Nevada.) "If I didn’t go, if I didn’t do those stops — I did 31 stops in 30 days or something like that. If I didn't do those stops, I think we would’ve lost 10 Senate seats, seven to 10 Senate seats, and we would’ve lost 60 to 70 House seats or more." (It would have been physically impossible for the GOP to lose 10 Senate seats, as there were only nine Republican-held seats up for election.)

Bill Mitchell, the right-wing host of YourVoice Radio, is widely ridiculed by liberals on social media as one of Trump's most ludicrously sycophantic supporters. A Twitter troll who doesn't understand how polls work, Mitchell confidently predicted in October that Republicans would keep the House, "100% Guaranteed."

Now that Republicans have lost the House, however, he has decided that losing the House was actually the best thing that could have possibly happened to Trump — because it's all part of a long game to clear out the "swamp dwellers," embarrass Democrats, and figure out how they "steal" elections:

Also, Mitchell has decided that the House is "useless" because Trump can just do whatever he wants by executive order now:

But even this doesn't compare to the insane takes from the "QAnon" conspiracy theory community.

The theory, laid out by a series of cryptic posts from an anonymous 4chan user claiming to be a high-level government informant, is that Trump is secretly working with former Attorney General Jeff Sessions and Special Counsel Robert Mueller to tackle an enormous, worldwide criminal operation by politicians that is doing everything from selling children into sex slavery to controlling the California wildfires with lasers.

Immediately after the election, some QAnon believers speculated that the election was irrelevant, because soon the mass arrests of everyone involved in the evil operation would begin, and several House Democrats would be caught up in it, leading to a wave of special elections that would return the House to the GOP. This hope was quickly dashed when Trump fired Sessions, who was supposedly a key actor in the plot to save America from the grand conspiracy, and now the whole QAnon community is in a state of disarray.

All told, many on the Right do not seem to appreciate the magnitude of the Democrats' victory. The GOP will no longer be able to pass far-right legislation, and Democrats will now control half of Congress' investigative committees, exposing Trump's dealings to real scrutiny for the first time. The sea change of politics in D.C. will become apparent in due course.