The Worst of 'True the Vote': Here Are 5 Appalling Events in the Voter Suppression Group’s Shameful History 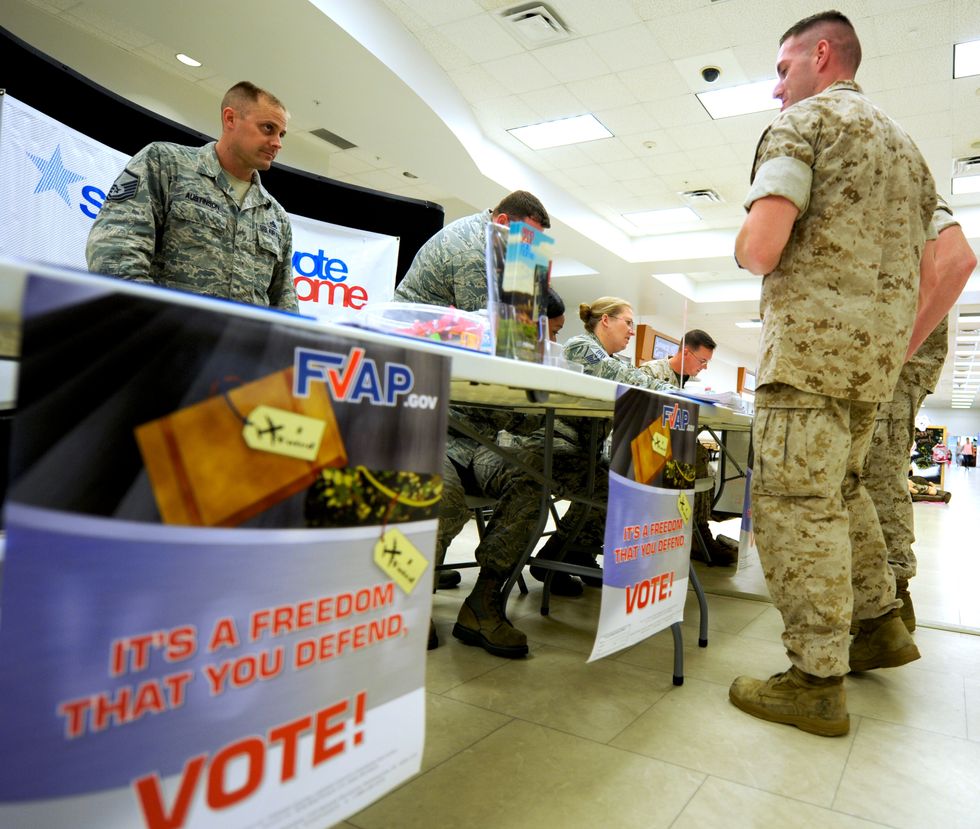 U.S. Air Force Capt Robert Espy, Kadena voting officer, and Marine Warrant Officer John Squares, Marine Core Base assistant voting officer, host a joint information booth on Oct. 21,2014, inside the Kadena Exchange, Okinawa, Japan. The event was hosted Oct. 20-22, from 11 a.m. to 1 p.m. and was hosted in an effort to push the importance of registering to vote, and assisting with absentee voting for those who want to vote absentee in the upcoming elections. (U.S. Air Force photo by Airman 1st Class Stephen G. Eigel/Released)
Alex Henderson
and
AlterNet
October 19, 2018

Earlier this week, MSNBC’s Rachel Maddow had a good laugh at the expense of True the Vote—a Tea Party-affiliated group that, since 2009, has been at the forefront of GOP voter suppression efforts. Maddow, in a mocking tone, read part of a new fundraising letter in which True the Vote complained that in Texas, “state officials have notified us that counties are being buried under hundreds of thousands of incoming voter registrations, all being strategically submitted (en masse).” Why, in God’s name—Maddow wanted to know—

is it a bad thing that Texans are registering to vote in large numbers?

But the letter that Maddow ridiculed speaks volumes about True the Vote’s mentality. True the Vote wants fewer Americans to vote, and that is especially true when it comes to communities of color. Founded in Houston nine years ago by far-right Tea Party activist Catherine Engelbrecht, True the Vote has billed itself as an organization determined to “prevent voter fraud.” But it’s no coincidence that their targets have mostly been people of color. And True the Vote’s critics have correctly described it as a group committed not to voter integrity, but voter suppression.

Here are five disgraceful moments in the True the Vote Hall of Shame.

1. 2017: True the Vote Falsely Claimed That Over 3 Million Undocumented Immigrants Voted Illegally in 2017—Never Offering a Shred of Proof

President Donald Trump has claimed that in 2016, he would have won the popular vote by a landslide had “millions” of undocumented immigrants not voted illegally. Trump has cited True the Vote’s Gregg Phillips (a former Texas Health and Human Services Commission official) as his source of information, and in 2017, Phillips claimed to be conducting an investigation proving that there had been “more than 3 million non-citizen votes” in 2016. But True the Vote ended up dropping its “investigation” in 2017 because, according to Engelbrecht, “we do not have the funding to do what we want to do.” True the Vote joined Trump in his outlandish claim that millions of indocumentados had voted for Clinton illegally, yet when all was said and done, Engelbrecht and Phillips never offered a shred of proof.

Although Texas is a Republican-leaning state, major cities like Houston, Austin and El Paso lean Democrat. When a group called Houston Votes launched a voter registration campaign in Houston in 2010, Engelbrecht went after the group with a vengeance and claimed that it was affiliated with the extremist New Black Panther Party. Houston Votes ended up being investigated by state officials for voter fraud, and its equipment was seized during an armed raid. Although no evidence of voter fraud was produced, Houston Votes ended up shutting down its efforts to register low-income voters—many of them African-American—thanks to Engelbrecht and her allies.

During the 2012 presidential election, True the Vote’s efforts to prevent blacks and Latinos from voting came to the attention of Democratic Sen. Barbara Boxer of California. In a letter to Thomas Perez (who at the time, was assistant attorney general for the Department of Justice’s civil rights division), Boxer asserted, “As you know, an organization called True the Vote, which is an offshoot of the Tea Party, is leading a voter suppression campaign in many states. This type of intimidation must stop. I don’t believe this is ‘True the Vote.’ I believe it’s ‘Stop the Vote.’”

Democratic Rep. Elijah Cummings of Maryland spoke out as well that year. In a letter to True the Vote, Cummings warned, “Some have suggested that your true goal is not voter integrity, but voter suppression against thousands of legitimate voters who traditionally vote for Democratic candidates. If these efforts are intentional, politically motivated, and widespread across multiple states, they could amount to a criminal conspiracy to deny legitimate voters their constitutional rights.”

In 2010, journalist Abby Rapoport visited a polling location in a predominantly black area of Houston while researching an article on True the Vote—whose poll watchers were present. When Rapoport asked where the poll watchers were, a custodian told her, “Just look for the white people.” Sure enough, True the Vote’s members were easy to spot: they were white poll watchers harassing black voters. And one of the voters they targeted was Gloria Alfred, who had been disabled by a stroke. Alfred’s son, who had been sworn in by poll workers, was helping her vote—and one of True the Vote’s members angrily barked at him, “You can’t help her!”

It was an ugly spectacle: white True the Vote members showed up in a predominantly black area in Houston, and one of them harassed the son of a stroke patient who was authorized to help his disabled mother vote. Altogether, True the Vote’s activities inspired 56 complaints from voters in Harris County in 2010—many of them for voter intimidation.