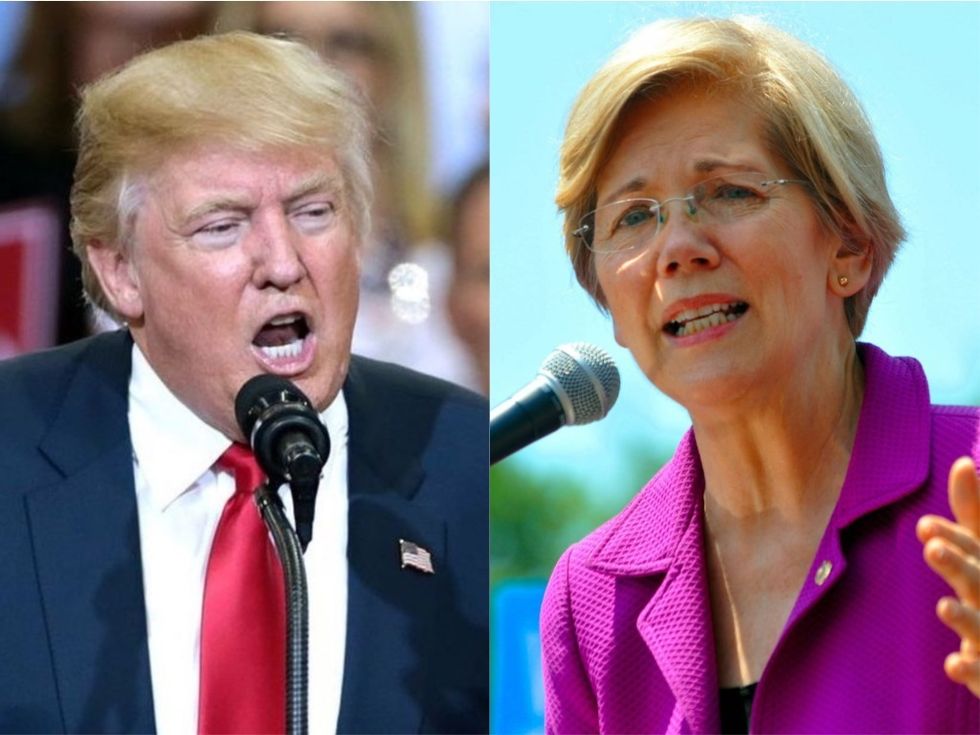 After years of Donald Trump taunting Sen. Elizabeth Warren, D-Mass., with the racist nickname "Pocahontas" and suggesting, falsely, that she used her family's claim to have Native American ancestry for a leg up in her law career, the truth is now out: Warren, as her family has long believed, is partly of Native ancestry. A DNA test, analyzed by a Stanford scientist prominent in the field, confirms not just this fact but the Warren family's timeline, which traced their Native ancestor back to the 1700s.

Now this largely irrelevant question — once again, Warren never used her claim to Native ancestry to influence her career trajectory — should be settled. Maybe the mainstream media can turn its attention to the more important and more interesting story, which is why Trump is so obsessed with this question of Warren's ancestry in the first place. An overwhelming amount of public information suggests that Trump has an unhealthy obsession with questions of bloodlines, ethnic heritage and genetics. Worse yet, his understanding of these issues appears to be filtered through the lens of eugenics, a pseudo-science with an unsavory history that looks even more troubling in light of Trump's overt and well-documented racism.

This isn't even the first time Trump has become fixated on the question of the racial heritage of a major Democratic politician. It was he, after all, who catapulted a fringe conspiracy theory that Barack Obama had somehow faked his birth certificate into the mainstream news cycle, hyping this conspiracy theory not just on Fox News but on NBC and ABC. Obama finally released his long-form birth certificate, settling the issue in the mainstream media — which should have never let Trump play this racist game in the first place — but Trump kept on hyping birtherism, using his Twitter account to repeatedly insinuate that Obama had cheated his way into the White House.

Because of this history, it's clear enough that Trump will continue to troll Warren with racist slurs, and overtly or otherwise will encourage his followers to do the same. It's basically the same accusation that he leveled at Obama, the idea that someone his followers resent has faked their heritage in order to get a leg up. More to the point, this is because Trump is obsessed with the topic of heritage and race, and how he imagines those things impact one's natural talents and abilities.

Last week, Business Insider reported that, according to one attendee at a private speech Trump gave in Britain in July, the president told the crowd that they have "all got such good bloodlines" and they must have "amazing DNA."

Such rhetoric, offered to a roomful of British business leaders, sounds almost like David Duke-style fantasizing about the alleged genetic superiority of Anglo-Saxons. But it does fit into Trump's long history of repeatedly suggesting  that some DNA and some bloodlines are just better than others — and he definitely puts the Trump family, which originated in Germany, in the top tier.

"The [Trump] family subscribes to a racehorse theory of human development," Trump biographer Michael D’Antonio told PBS in a 2016 "Frontline" episode that really should have gotten more attention at the time. "They believe that there are superior people and that if you put together the genes of a superior woman and a superior man, you get a superior offspring."

Huffington Post reacted to this by putting together a compilation of quotes from Trump over the years, demonstrating his lifelong obsession with the idea of genetic superiority, which he clearly believes he possesses.

The video shows Trump denying that all men are created equal, by insisting that some are simply born smart and others aren't. Other quotes show Trump repeatedly and extensively insisting that he was born with superior intellect, which he attributes to having "a certain gene" and his "great genes" and "the winning gene." He also attributes other people's failings to what he assumes is genetic inferiority.

"When you connect two racehorses, you usually end up with a fast horse," he says in one clip.

"You know, I'm proud to have that German blood. There's no question about it," he says in another clip. "Great stuff."

Being proud of your ancestry isn't a bad thing in and of itself, but Trump's rhetoric goes well beyond that, embraces a view that ties his German ancestry to a sense of his own superiority over other people. Coupled with his infamous remark about immigrants from "shithole countries," referring to Haiti and various African nations, and his insistence that the U.S. should favor immigrants from places like Norway, a real picture of Trump's view of genetic superiority comes into focus.

These views about his family and heritage look even more troubling in light of some ugly facts about Trump and his father. In 1927, as American fascism was on the rise, Trump's father, Fred Trump, was arrested at a riot that began when sympathizers of Italian fascism and members of the Ku Klux Klan tangled with anti-fascist protesters. Trump has denied that the arrest ever happened, but the records are clear that his father was detained after refusing to leave when the police tried to disperse the rioting crowd.

In 1950, Woody Guthrie wrote a song denouncing Fred Trump as a racist, accusing him of discriminating against black tenants. This issue came up again in the 1970s, when the Justice Department sued the Trumps for racial discrimination, a charge that caused Donald Trump to complain that the government was trying to force him to rent to welfare recipients.

In 1990, Marie Brenner reported in Vanity Fair that Ivana Trump described her husband as having a book of Hitler's speeches, which Brenner asked him about. Their exchange is noteworthy.

“Did your cousin John give you the Hitler speeches?” I asked Trump.

Trump hesitated. “Who told you that?”

“Actually, it was my friend Marty Davis from Paramount who gave me a copy of Mein Kampf, and he’s a Jew.” (“I did give him a book about Hitler,” Marty Davis said. “But it was My New Order, Hitler’s speeches, not Mein Kampf. I thought he would find it interesting. I am his friend, but I’m not Jewish.”)

Later, Trump returned to this subject. “If I had these speeches, and I am not saying that I do, I would never read them.”

Warren's family story about Native American heritage isn't all that important. It now appears that her mother and earlier generations were correct about that connection, but Warren has never used it to gain any kind of advantage and it hasn't impacted her political views or her academic and legal work in any obvious way.

The same cannot be said for Trump's obsession with bloodlines, genetics and race, and his evident belief that some people — including his own family — simply have have better blood than other people. His administration continues to demagogue about the evils of immigration, and to explore every possible legal avenue to prevent people of color from immigrating here and to kick out those who already have. Groups of Trump-loving white men like the Proud Boys seek out violent confrontation, picking street fights in the name of "Western chauvinism" (their term). Trump is trying to turn his obsession with blood and genetic superiority into a national obsession. That's what his derisive "Pocahontas" comments are really about — and that's the story the mainstream media has largely missed so far.