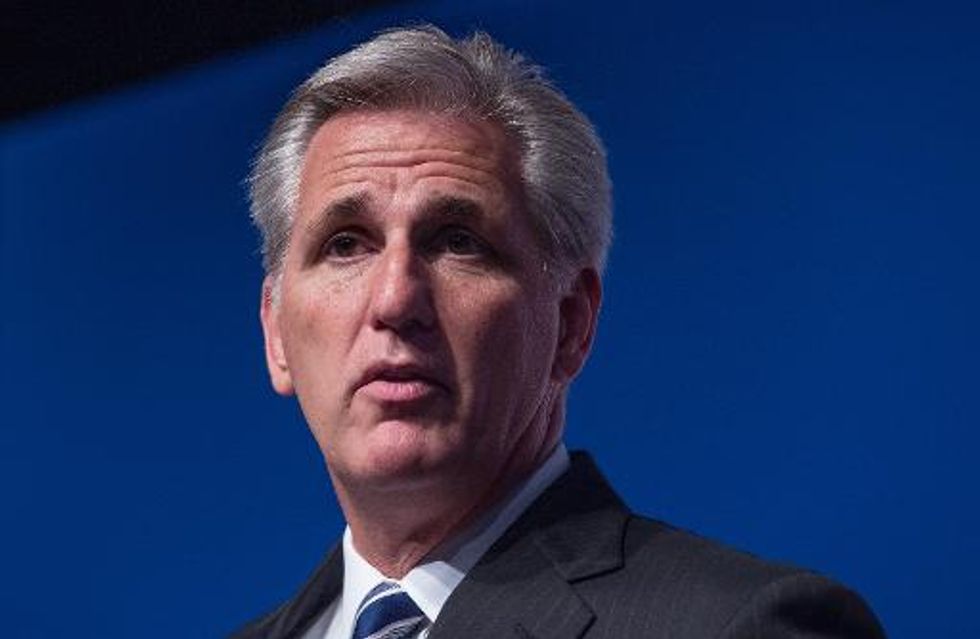 House Majority Leader Kevin McCarthy, R-Calif., was widely criticized for his tweet targeting prominent progressives who happen to be Jewish — even after one person he mentioned was targeted with an IED last week — despite previously declaring that the current political climate is increasingly hostile not to religious minorities in America but to Christians in America, who he argues, are being "forced out of the public square."

While speaking at the Council of National Policy in May, McCarthy said, "Increasingly, people like us are belittled and forced out of the public square. Conservative Christians are being silenced in corporate America and the mainstream media." He also said there are "troubling reports that Amazon excluded the Alliance Defending Freedom [ADF] from its charity program after some left-wing activist group went after them."

"If ADF is not safe from discrimination, no conservative group is safe," he claimed. "And this is not an isolated incident."

The House Majority Leader's wife, Judy McCarthy, claimed in a 2014 interview with the Christian Broadcasting Network's David Brody, as the congressman sat beside her, that "People are sympathetic to different things and different causes, but when you bring up Christian, there is no sympathy whatsoever. They do not think you should be able to have that belief and it's not — I mean, you're not pushing that on someone else; it's your own belief, you're living it — but no I've never seen it the way it is now. I mean, I do think it's really scary actually. I think they don't want you to have the right to be a Christian."

The California lawmaker has come under intense scrutiny in recent days after he suggested on Twitter last Tuesday that Jewish people are trying to buy the midterm elections this November, just four days before a gunman opened fire at a Pittsburgh synagogue, leaving 11 people dead and six others injured. The suspect allegedly made anti-semitic remarks to police after his arrest.

In a tweet posted last Tuesday, McCarthy wrote, "We cannot allow Soros, Steyer, and Bloomberg to BUY this election. Get out and vote Republican November 6th! #MAGA." The tweet accompanied a video of McCarthy making the same remarks.

McCarthy's tweet, which has since been deleted, referred to George Soros, Tom Steyer and former New York mayor Michael Bloomberg — three billionaires who donate heavily to liberal causes and have Jewish family backgrounds. Soros is a Hungarian American Holocaust survivor; Steyer has a Jewish father; and Bloomberg is Jewish and was named the first recipient of the Genesis Prize, dubbed as "the Jewish Nobel Prize." The tweet was pinned to the top of McCarthy's Twitter profile until it was deleted on Wednesday. Soros and Steyer were among high-profile Democrats and critics of President Donald Trump who received packages containing explosive devices last week.

Several critics and political observers have expressed concern that McCarthy and his wife's comments are dog whistles for people like Cesar Sayoc, the Florida man who arrested in connection with the suspected bombings, and Robert Bowers, the suspect in the Pittsburgh shooting. Others have pointed out that McCarthy's tweet didn't mention top Democrat donor Fred Eychaner, who gave $68 million to Democrats this election cycle, because he's a Methodist.

It is unclear why McCarthy pinned the tweet to the top of his Twitter page and why he deleted that tweet. It is unknown if the tweet was pre-scheduled. Matt Sparks, McCarthy's communications director, told Salon, "Kevin McCarthy's legislative record, personal experience, and regular participation in bipartisan, pro-Israel policy conferences make it unquestionably clear he loves the Jewish people and the Jewish State. We will not dignify this hurtful accusation with further comment."

But Steyer, whose father was Jewish, said he felt McCarthy's tweet about him was anti-semitic during a Sunday appearance on CNN. "In terms of interpreting what he said, that seems, to me, like a straight-up anti-semitic move. I think that there – that is a classic attempt to separate Americans. I think that absolutely falls into the category of what I'm describing as political violence," Steyer said. He also accused the Republican Party of creating a politically violent environment and blamed Trump of "routine, systematic, lawlessness." While Steyer said he did not blame Trump for the shooting, he said, "I'm absolutely associating and blaming him for creating the atmosphere that exists."

Trump responded on Twitter, writing that he watched "Wacky Tom Steyer," who he said, "comes off as a crazed & stumbling lunatic who should be running out of money pretty soon."

On Monday, White House counselor Kellyanne Conway suggested Saturday's synagogue shooting was part of "the anti-religiosity in this country," which she said is demonstrated by late-night comedians who crack jokes about Christians. During an appearance on Fox & Friends, Conway said that the president "denounced anti-Semitism," before citing the racist massacre in a historic black church in Charleston, South Carolina, that left nine worshippers dead in 2015.

"These people were gunned down in their place of worship," she said of both the Charleston victims and those of Saturday's shooting. She concluded that the shootings are a sign that "this is no time to be driving God out of the public square." Conway conveniently forgot that Dylann Roof, the convicted Charleston church shooter, is a white supremacist who was motivated by racial hatred. Similar to the Pittsburgh shooter, Roof publicly broadcasted his racist beliefs and motivations for his attack. Sayoc, the suspected bomber, was also radicalized. Even Jeff Sessions, Trump's Attorney General, confirmed the suspected bomber is a "partisan" at a press conference Friday afternoon.

"We will not tolerate such lawlessness, especially political violence," Sessions said. He warned, "Let this be a lesson to anyone, regardless of their political beliefs, that we will bring the full force of law against anyone that who attempts to use threats, intimidation and outright violence to further an agenda. We will find you, we will prosecute you to the fullest extent of the law."

Despite Conway and McCarthy's claims that Christians suffer anti-Christian bias, Christians are the least targeted group for anti-religious hate crimes, according to FBI hate crime statistics for 2016. Of the total 1,538 offenses reported by law enforcement, Jews and Jewish institutions constituted more than half of the victims — 54 percent. Muslims were victims of 24 percent of anti-religious crimes and Christians and their churches were victims of only 11 percent of the incidents. Statistics for 2017 have not yet been published.