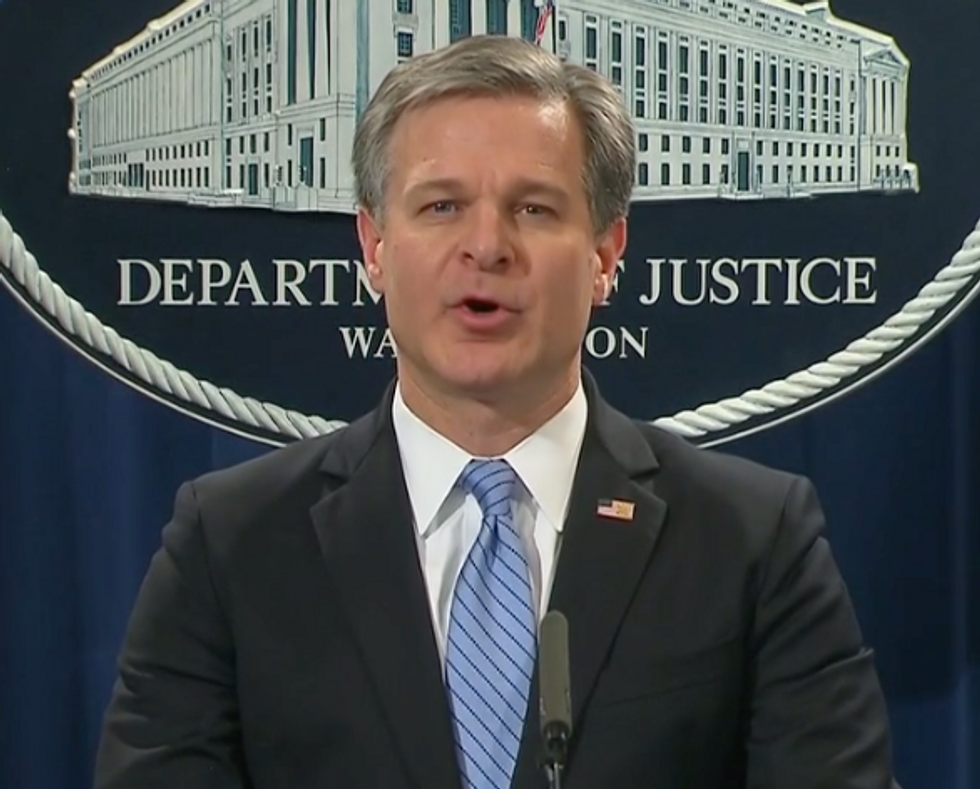 Even as federal investigators were tracking down and arresting Cesar Sayoc, the suspect in a string of mail bombs sent to top Democratic figures and CNN, President Donald Trump was casting doubt on the reality of the attacks and complaining about the impact they have had on the election.

In one of Trump's tweets about the subject, he put quotes around the word "Bomb" in an apparent attempt to suggest that explosive devices might be fakes. FBI Director Christopher Wray later confirmed that the devices were not hoaxes.

The stark juxtaposition between Trump's reaction and the FBI's professional work prompted many to wonder when the president was informed in the bureau's progress. One reporter asked Wray at a press conference about the FBI's communications with the White House, but the director brushed off the question.

"I'm not going to get into our discussions with the president," he said.

But despite explicitly refusing to comment on his communications with the president, Wray said he "received a very nice congratulatory call from the president."

He added: "He, like every American, is and should be proud of the unbelievable work that was done not just by the FBI but by all of our law enforcement partners."

It was a troubling sign that the director refused to answer a question that might make the president looks bad. Instead, he gave an answer that cast the president in a positive and grateful light, despite Trump's distaste for the FBI and his apparent skepticism about the attacks. As the head of a quasi-independent agency, Wray should avoid looking like he's boosting the president to help his image.

But more importantly, it's deeply concerning that the president may have been actively stoking suspicions about the reality of the attacks even as the United States' own law enforcement agencies were in direct pursuit of a serious suspect in the matter. If he was fully aware of the FBI's progress in this case and the seriousness of the matter, then it is condemnable behavior. It would mean he has a lack of genuine concern for the safety and security of those who he deems political enemies and is willing to disregard violence as long as it can serve his political aims.

Watch the clip of Wray's comments below:

@ABCPolitics FBI Dir. Wray says he "received a very nice congratulatory call from the president." "He, like every… https://t.co/XCPaDasrOr
— ABC News (@ABC News) 1540582110