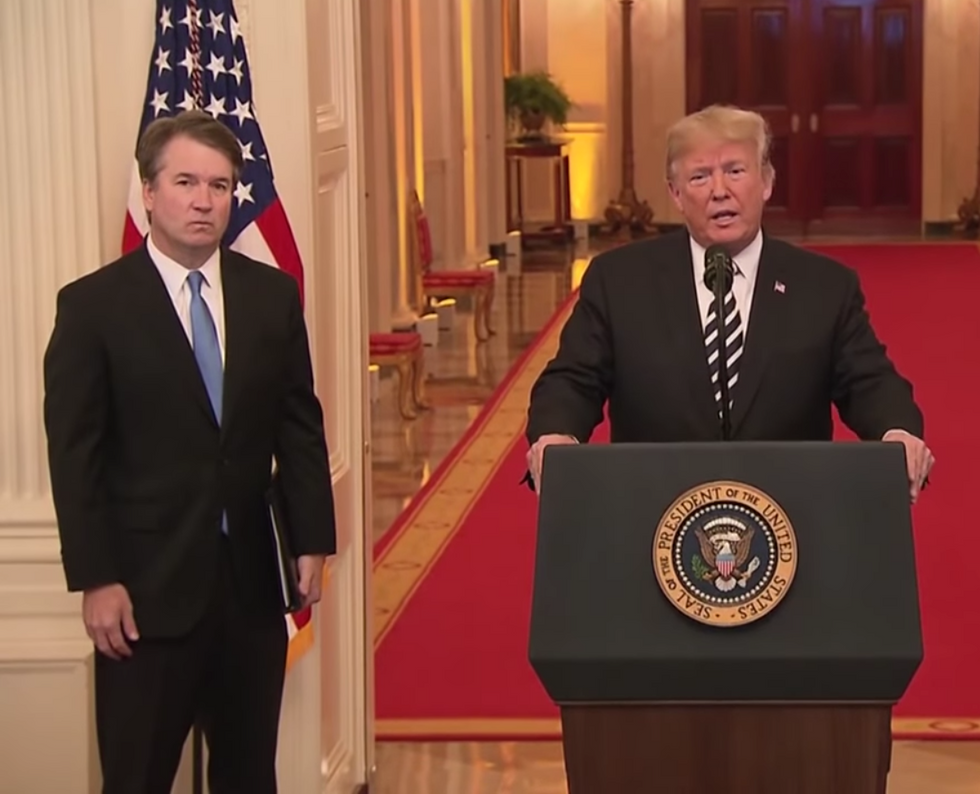 With Justice Brett M. Kavanaugh’s confirmation, the far right now has a majority on the U.S. Supreme Court—which means that everything from abortion rights and gay rights and to health care reform could be on the chopping block. The High Court already leaned conservative, but while the retired Justice Anthony Kennedy (appointed by President Ronald Reagan in 1987) was a right-winger with libertarian leanings at times, Kavanaugh is much more of a social conservative in the Clarence Thomas/Antonin Scalia vein. And this new edition of the Court could not only further the theocratic agenda of the Christian Right, but also, overturn the Affordable Care Act of 2010, criminalize affirmative action or attack voting rights—all of which makes an argument in favor of something President Franklin Delano Roosevelt attempted in the 1930s: Court packing.

Presently, the Supreme Court has nine seats, but were the Court to be packed, that number could be increased to 11, 13 or more seats—and it would be easier to make that happen than to impose term limits for justices, which would require altering the U.S. Constitution.

While presidents are limited to two terms and governors, congressmen, senators and city council members can be voted out of office, Supreme Court appointments are permanent—which means that Kavanaugh, a 53-year-old Generation X-er, might still be on the Court in 2050 if he lives as long as Justice Ruth Bader Ginsburg (now 85). Those who believe that Supreme Court justices have way too much power can be found on both the left and the right; in fact, a 2017 Reuters/Ipsos poll found that ten-year terms for Supreme Court justices were favored by 74% of Republicans and 66% of Democrats. And some prominent Republicans, including former Arkansas Gov. Mike Huckabee and Sen. Rand Paul, have expressed their support for Supreme Court term limits.

Compared to removing Kavanaugh via the impeachment process outlined in the Constitution or changing the Constitution in order to impose Supreme Court term limits, Democrats might have an easier time packing the High Court—and they wouldn’t have to change the Constitution to do it.

Although the Constitution mandates that Supreme Court appointments are permanent, it doesn’t say anything about how many justices there can be—and Congress has the power to either increase or decrease the number of justices. That happened in the 19th Century, when the number of justices was increased to six in 1802, seven in 1807, nine in 1837 and ten in 1863 before being reduced to eight in 1866 and increased to nine in 1869.

Not since 1869 has the number of Supreme Court justices changed, although FDR tried in the 1930s—when he realized that conservatives on the Court were hostile to elements of his New Deal (such as instituting a national minimum wage). FDR’s plan was to expand the Supreme Court to 15 justices, which could have given the Court a liberal majority. But that proposal was voted down in the Senate.

Nonetheless, the mere threat of a Supreme Court expansion might have scared some right-wing justices of the 1930s into being more New Deal-friendly. In its 1937 ruling in West Co. Hotel Co. v. Parrish, the High Court upheld the constitutionality of Washington State’s minimum wage law—which was a reversal of Adkins v. Children’s Hospital, a 1923 High Court ruling that declared minimum wage laws for women to be unconstitutional. Historians have described the Court’s more New Deal-friendly decisions of 1937 as “the switch in time that saved nine.” And in 1938, the first national minimum wage (25 cents per hour) came about when Congress passed the Fair Labor Standards Act, which FDR gladly signed into law.

So possibly, the threat of Court-packing by Democrats could discourage Kavanaugh, Clarence Thomas, Neil Gorsuch and other far-right justices from making really radical decisions. But no Court-packing is going to be possible as long as far-right Republicans control the federal government’s executive branch and both houses of Congress.

It remains to be seen how well Democrats will perform in the 2018 midterms or the 2020 presidential election. But if Democrats were to regain a strong majority in Congress and Trump were voted out of office two years from now, Court-packing could become a realistic threat in 2021 or beyond.

There were times in the past when Democrats and Republicans could butt heads yet come to reasonable compromises. President Reagan’s first High Court nominee, Sandra Day O’Connor, received a lot of votes from Senate Democrats in 1981—and Senate Democrats of 1987 considered Anthony Kennedy, another Reagan appointee, to be a fair compromise after rejecting wingnut Robert Bork.

But in 2016, Senate Majority Leader Mitch McConnell showed how vindictive a partisan he could be when he refused to even consider President Barack Obama’s centrist Supreme Court nominee, Judge Merrick Garland. McConnell and Trump are authoritarians who govern from an us-versus-them mentality, and they are motivated by a quest for raw power—not a belief in checks and balances.

Ultimately, Court-packing might be Democrats’ best means of reining in a far-right Supreme Court that tries to shred everything from abortion rights to gay rights to voting rights—that is, if enough Republicans are voted out of office first.