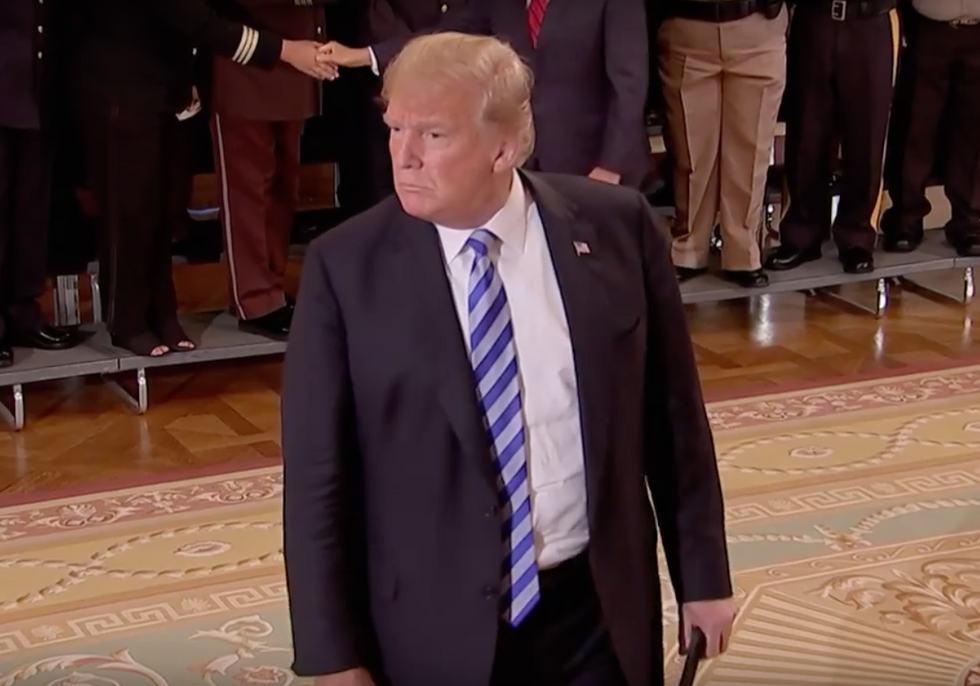 President Donald Trump was clearly rattled Wednesday at a public White House event after the New York Times published a blistering op-ed from an anonymous administration official who described the president as erratic and said top aides work to undermine his worst impulses.

While hosting a group of sheriffs, Trump blasted the op-ed — and the New York Times for running it — and desperately tried to defend his presidency.

"The failing New York Times has an anonymous editorial — can you believe it? Anonymous! Meaning gutless. A gutless editorial!" he bellowed. "We're doing a great job. The poll numbers are great. The poll numbers are through the roof. And guess what? Nobody is going to come close to beating me in 2020. Because of what we've done. We've done more than anyone ever thought possible."

While many agreed with Trump's claim that it was "gutless" or "cowardly" to publish the op-ed anonymously, the president's long history of being an anonymous source — and sometimes, it seems, a pseudonymous source — for news reports made the attack pretty hypocritical.

His rant was also filled with lies. Though he often likes to claim otherwise, the New York Times is far from "failing." Even his own attacks on this front are contradictory. He said that Times is only surviving because his presidency drives circulation and traffic numbers — but this suggests that there's a large demand for the paper's work that is often critical of him.

He also blatantly lied by claiming that he has great poll numbers. His poll numbers are historically low, and they always have been — especially when the positive state of the economy is taken into account. And very recent polling suggests his poll numbers are getting even worse — they're absolutely not "through the roof."

And it's just obviously untrue that he's done "more than anyone ever thought possible." In many ways, from his dismal response to Hurricane Maria to the abusive family separation policy, his administration has been an unrelenting disaster. Even in crassest political terms, Trump has had two major shots at legislative legacy-making so far — tax reform and Obamacare repeal — and only tax reform succeeded. Plans to "repeal and replace Obamacare," which Trump repeatedly said would be easy, crashed and burned.