Nevada Nightmare: Being Jailed for Traffic Tickets Became a Death Sentence for This Texas Woman 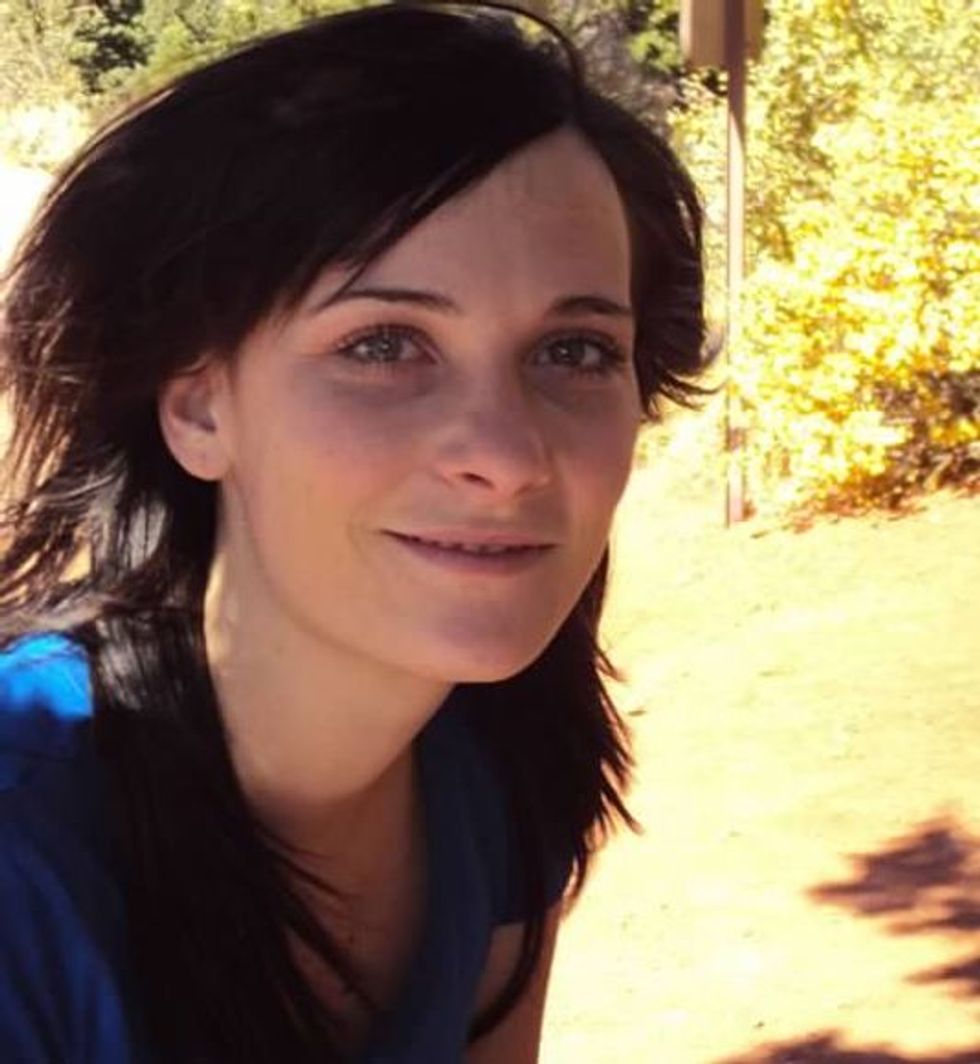 Texas resident Kelly Coltrain, 27, had just finished visiting Reno and Lake Tahoe for a family reunion to celebrate her grandmother's 75th birthday when she was pulled over for speeding outside Hawthorne, Nevada, on July 19, 2017. She was booked into the Mineral County jail because of outstanding traffic tickets. She told jailers she was dependent on opioids, had a history of seizures related to withdrawals, and needed to go to the hospital. She never got there.

For three days, Coltrain remained in her cell, eating little, spending most of her time in bed in the fetal position, and asking for help. Despite being in a video-monitored cell where her discomfort was evident, sheriff's deputies ignored her requests for medical attention. Instead, even as her condition worsened, the deputies' only response was to hand her a mop and tell her to clean up her own vomit in her cell.

Kelly Coltrain sits in a cell at the Mineral County Jail in Hawthorne. She died about an hour after her jailer asked her to mop her vomit from the floor. (Photo: Mineral County Sheriff)

She was dead less than an hour later—although it would take deputies another six hours to notice and another six hours after that before they summoned medical personnel. An investigation into her death was completed last week. It found that her jailers violated multiple policies by denying her medical care after she told them she was dependent on drugs and suffered seizures during withdrawals. The state investigators also found evidence the sheriff's office may have violated state laws barring the inhumane treatment of prisoners and official oppression and asked the Mineral County District Attorney to consider criminal charges. Instead, Mineral County handed the case off to neighboring Lyons County District Attorney Stephen Rye, who declined to press charges.

"The review of the case, in our opinion, did not establish any willful or malicious acts by jail staff that would justify the filing of charges under the requirements of the statute," Rye said.

Now, as first reported by USA Today, Coltrain's family is seeking justice via a wrongful death suit filed last week. The suit accuses the sheriff's office of ignoring her life-threatening medical condition despite knowing she was in withdrawal and had a history of seizures.

"(Jail staff) knew Kelly Coltrain had lain for days at the jail, in bed, buried beneath blankets, vomiting multiple times, refusing meals, trembling, shaking, and rarely moving," lawyers Terri Keyser-Cooper and Kerry Doyle wrote in the lawsuit. "Defendants knew Kelly Coltrain was in medical distress. Kelly Coltrain’s medical condition was treatable and her death preventable," the lawyers wrote. "If Ms. Coltrain had received timely and appropriate medical care, she would not have died. Kelly Coltrain suffered a protracted, extensive, painful, unnecessary death as a result of defendants’ failures."

Keyser-Cooper, who has spent decades bringing successful civil rights lawsuits against northern Nevada law enforcement agencies, told USA Today said the Coltrain case was "the worst I have ever seen in 33 years. I've never seen anything like this."

According to the state investigation, after she was arrested, Coltrain initially refused to answer questions about her medical history and family, but once she realized she would not be able to bail out, she told Sgt. Jim Holland she was addicted and had a history of seizures when going through withdrawals. The report found that Holland didn't follow a jail policy that requires that prisoners with seizure histories be cleared by a doctor before being held, and neither did jail staff monitor her vitals, as medical protocols required for prisoners undergoing withdrawals. In fact, the small jail in the county of 4,000 had no on-site medical care, instead taking prisoners to the hospital across the street for medical treatments and prescriptions.

The same evening she was jailed, Coltrain told night deputy Ray Gulcynski she needed to go to the hospital immediately for medication, but Gulcynski ignored the jail's medical care policy, telling Coltrain she couldn't go unless he decided her life was at risk.

"Unfortunately, since you're DT'ing (referring to the detoxification process), I'm not going to take you over to the hospital right now just to get your fix," Deputy Ray Gulcynski told Coltrain, according to the investigation report. "That's not the way detention works, unfortunately. You are incarcerated with us, so… you don't get to go to the hospital when you want. When we feel that your life is at risk… then you will go."

For the next three days, Coltrain lay in her cell, eating and drinking little and spending most of her time under the blankets in the fetal position. Early on July 22, she began vomiting, trembling, and "making short, convulsive movements," the report found. About 5 p.m. that day, Sgt. Holland brought her dinner and tried to get her to eat a few bites, which she did. He then brought her a new set of jail clothing to replace her soiled garments, along with a mop. Holland told her to mop the vomit from the floor.

According to the investigative report, Coltrain just sat there until Holland returned a few minutes later and asked her again to mop. Jail video showed her then trying to mop the floor as she sat on her bed, trembling and stopping frequently to rest. Holland thought she was being lazy.

Less than an hour later, Coltrain was dead. Jail video showed her lying in the fetal position when she goes into a seizure. Her body goes rigid and her legs stiffen. While lying on her stomach, her face rises toward the back wall and her arm stretches out, hanging off the bed. Her head falls back to the mattress, she appears to go into a series of convulsions, then stops moving—forever.

That was 6:26 p.m. Her body lied there untouched until 12:30 a.m. the following day when Deputy Gulcynski comes to move her to a different cell and finds her unmoving. He nudges her leg with the tip of his boot, and when she doesn't respond, he looks at her face, touches her arm, and quickly leaves.

The investigation found that Gulcynski notified his superiors that Coltrain looked dead and was cold. He re-entered the cell to check her pulse before leaving again. No one called paramedics. Instead, her body was left in the cell until a forensic technician arrived at 5:48 a.m. to begin investigating the death.

The Washoe County Medical Examiner, who handled the case for resource-poor Mineral County, ruled Coltrain's death accidental and caused by "complications of drug use." Toxicology reports showed heroin in her system.

But the state investigator, Detective Damon Earl, said in his report that had the jailers followed department policies already in place, Coltrain's death may have been preventable.

"There were a limited number of times where Coltrain had actual contact with the staff," Earl wrote. "This may be significant because had more contact been made with Coltrain, indicators of Kelly's medical condition may have been observed. These indicators may have alerted staff therefore prompting medical attention to be rendered to Coltrain."

While the civil suit says that both Holland and Gulcynski were subject to departmental discipline over the incident, Holland instead retired early—and got a going away present from the Mineral County Commission. In June, the commission voted unanimously to spend $17,853 to buy Holland an additional year toward his service. That let him retire with a higher annual pension and more health care benefits than if it had been denied.

The county commission had the money to give its negligent jail guard a nice little gift. Let's hope the commissioners and the good citizens of Mineral County are already budgeting to account for the payout they will most likely be making once Kelly Coltrain's family gets its day in court.

Family attorney Keyser-Cooper said Coltrain was a "successful student, a friendly outgoing girl, and an exceptionally talented soccer player," who was dear to her family. She had developed depression and addiction after a knee injury as a teenager in Las Vegas. While the family seeks compensatory damages, what it really wants, Keyser-Cooper said, is for conditions at the jail to improve. The family will not settle the suit without that, he added.