The Massive Brett Kavanaugh Charade Is Collapsing Before Our Eyes 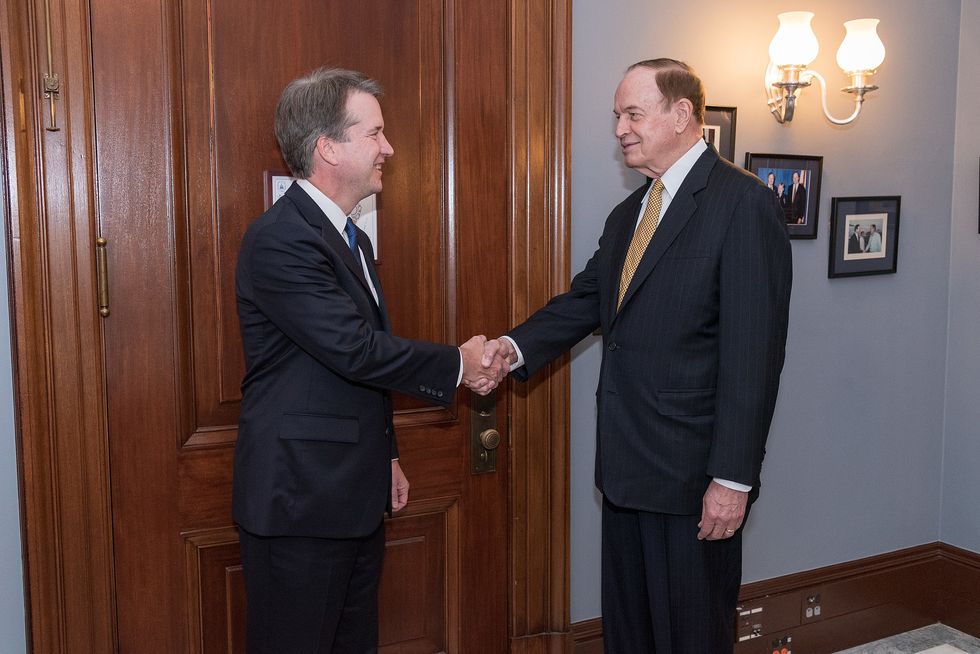 Facing a public relations debacle, Senate Republicans have come up with a surefire compromise to win confirmation of Judge Brett Kavanaugh to the Supreme Court: Instead of simply dismissing the sexual assault accusation lodged against their nominee, they will pretend to investigate -- and only then rubber-stamp him.

Won't both sides be served by taking sworn testimony from the nominee and his accuser, Christine Blasey Ford, about his alleged attack on her in high school? The public hearings announced by the Senate Judiciary Committee for next Monday will feature "he said" and "she said" and nothing more. What could be fairer?

Only the Republicans who control this process could consider such an approach legitimate, let alone responsible. They want to assure midterm voters, especially women, that they have listened to Ford, considered her accusation seriously and done the right thing. But they also want to rush Kavanaugh into a lifetime appointment on the high court, despite the fact that he lied to the Senate and the public under oath, repeatedly. They aren't eager to look closely at the strong possibility that he is lying about his encounter with Ford, too.

Sen. Chuck Grassley, R-Iowa, the Judiciary Committee chair, says he won't allow the introduction of any evidence beyond the testimony of the two main witnesses. He sees no reason to seek the testimony of any additional witness or ask the FBI to investigate Ford's story.

"The FBI investigation of Judge Kavanaugh is closed," Grassley said, adding later, "We've got two people involved, and two people ought to be able to present their stories, and then we'll have to be the jury." He specifically excluded any testimony from Mark Judge, a friend of Kavanaugh identified by Ford as present in the room when the alleged incident occurred. Like Kavanaugh, Judge has issued a denial.

So Grassley has barred the only potential witness who might corroborate the Republican nominee's defense -- on the surface, a very strange position for a Kavanaugh supporter. But the chairman's reticence makes perfect sense to anyone who has examined the writings and social media droppings of Judge, which betray a strong misogynistic streak and more than a tinge of racism.

A senator who has read Judge's collected works, now available on the internet, might ask him to explain his peculiar opinions about who is to blame when a woman is raped. Such a senator might inquire about his charming high-school yearbook quote: "Certain women should be struck regularly, like gongs." Such a senator might also question Judge about his 1997 memoir, "Wasted: Tales of a Gen X Drunk," which features scenes of blackout drunkenness with a character called "Bart O'Kavanaugh."

Judge has even more embarrassing material in his portfolio, all of which tends to undercut his role as alibi for his high school buddy. His confessed bouts of binge drinking and bizarre sexist bluster would likely make him an entertaining witness, but not in a good way for Kavanaugh. And his memoir's theme of alcoholic youth corroborates Ford, who told the Washington Post that Kavanaugh and Judge were stumbling drunk when the alleged assault happened.

Rather than put Judge under oath, however, Grassley will pretend that the sole named witness, other than Kavanaugh and Ford, simply doesn't exist. Meanwhile Judge, who clearly doesn't fear a Senate subpoena, has informed the committee that he plans to skip its hearing altogether.

Somehow Grassley thinks most Americans won't see through this charade, which mocks the fact finding that senators are actually supposed to do. He insults his colleagues as well by assuming that they will go along. Yet even in the ultrapartisan atmosphere of Washington, a fake pro-forma "investigation" of the allegations against Kavanaugh may not pass muster. Only one or two conscience-stricken Republicans need to dissent for this scheme to blow up.