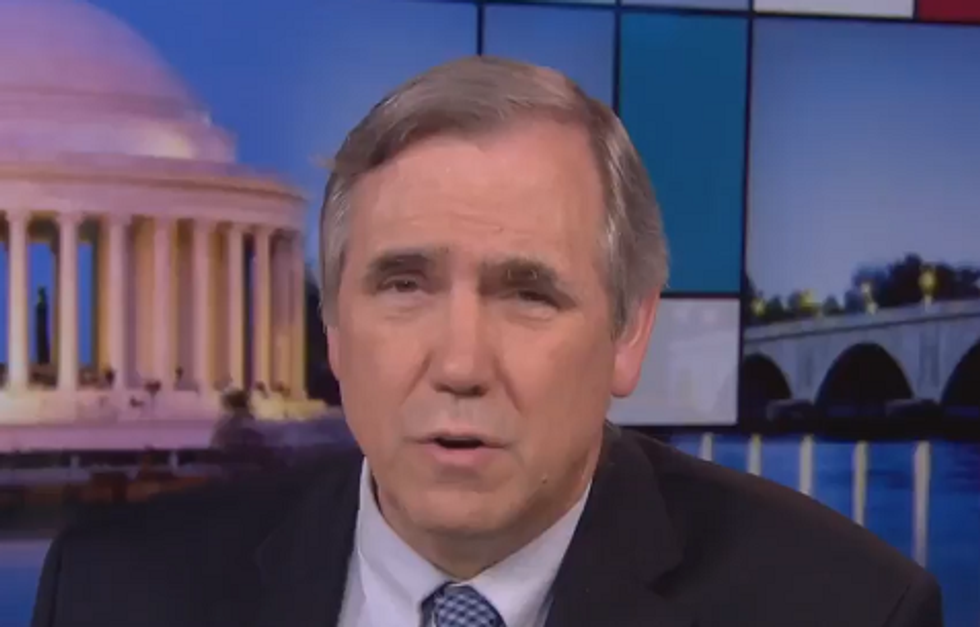 The scope of President Donald Trump's abuse of migrant families is still only just unfolding. Hundreds of children remain separated from their parents, and new reports detail how the Trump administration raided $9.8 million in FEMA funding to pay Immigration and Customs Enforcement (ICE).

But things might be about to get worse, as Sen. Jeff Merkley (D-OR) warned Rachel Maddow on MSNBC Tuesday night.

"The administration has just put out a draft regulation which they intend to establish internment camps to lock up children behind barbed wires," said Merkley. "So we're going from the horrendous policy of ripping children out of their parents' arms — and of course we're still trying to reunify all those families — to a new strategy of building internment camps that would be funded through the same account that these funds would go to, through ICE."

"Internment camps for kids who have been accused of crimes? Of kids who are in trouble in the judicial system because of some criminal behavior?" Maddow pressed him. "Or simply kids who are immigrants?"

"Kids who are simply part of a family. So this is family internment camps," replied Merkley. "And we haven't done anything like that since World War II. It absolutely comes from a dark and evil place in the heart of this administration. They're going from one strategy of inflicting trauma on children to a new strategy that they're trying to implement to inflict trauma on children, all to send, as Jeff Sessions says, a message of deterrence to discourage people who are fleeing persecution, from ever considering arriving on the shores of the United States of America."

Trump's horrific treatment of migrant children, many of whom have been kept in cages and forcibly injected with psychiatric drugs, has led him to clash with courts. Several children were not reunited with their families within the deadline mandated by a federal judge.