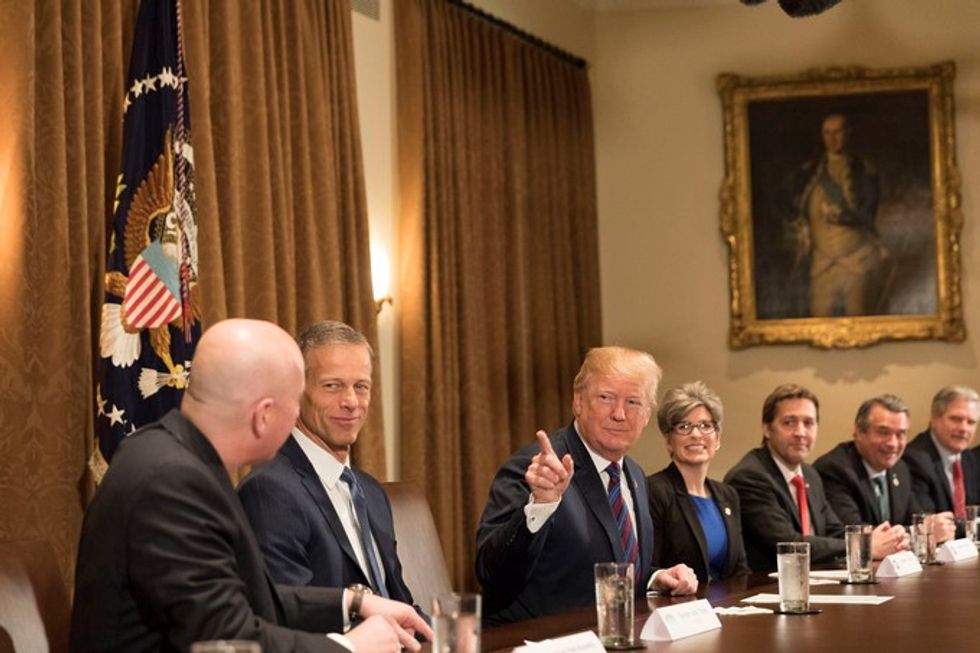 As the GOP plows ahead with another round of budget-exploding tax cuts for the richjust before the crucial 2018 midterms, President Donald Trump's top economic adviser and former television personality Larry Kudlow confirmed on Monday that the White House will push for cuts to life-saving safety net programs like Medicare and Social Security if the GOP retains control of Congress in November.

"We have to be tougher on spending," Kudlow, the director of the National Economic Council, declared in remarks to the Economic Club of New York.

Asked when Social Security and Medicare will be targeted for "reforms"—which, as one advocacy group noted, is "code for massive cuts"—Kudlow said, "Everyone will look at that—probably next year."

"Believe them when they say they are coming after Medicare and Social Security," Topher Spiro, senior fellow at the Center for American Progress, wrote on Twitter in response to Kudlow's comments. "This election is the last chance to stop them."

In the months since Trump signed into law the GOP's initial $1.5 trillion in tax cuts for the rich, progressives have been warning that the White House and Republicans would attempt to use the resulting deficit explosion as a justification to slash popular programs like Medicare, Medicaid, and Social Security.

Kudlow's comments represent the latest admission that this is precisely the GOP's plan of action if they are able to keep control of Congress in November.

"This is wholly unacceptable: Republicans giving huge tax breaks to the rich and now coming after the vital programs that millions of Americans rely upon," the progressive coalition Tax March declared in a tweet on Monday. "We won't allow it."

Republicans have long placed obliterating the safety net near the top of their party's list of priorities, but their attack on key public programs will likely take on even more intensity if they ram through Tax Scam 2.0, which experts say could cost an additional $3 trillion over ten years.

"For weeks, Republicans have been misleading the American public—the truth is they have been trying to cut Medicare for years," the advocacy group Protect Our Care noted. "Today, Larry Kudlow, Director of the National Economic Council, confirmed that they still have their sights set on Americans' care.

Despite Trump's insistence on the campaign trail that he would not go after Medicare, Medicaid, and Social Security, the president's "morally bankrupt" 2019 budget proposal released earlier this year called for $1.7 trillion in cuts to safety net programs—including hundreds of billions in cuts to the very programs he vowed to shield.