RESPECT: Here Are 5 of Aretha Franklin’s Most Important Contributions to Civil Rights 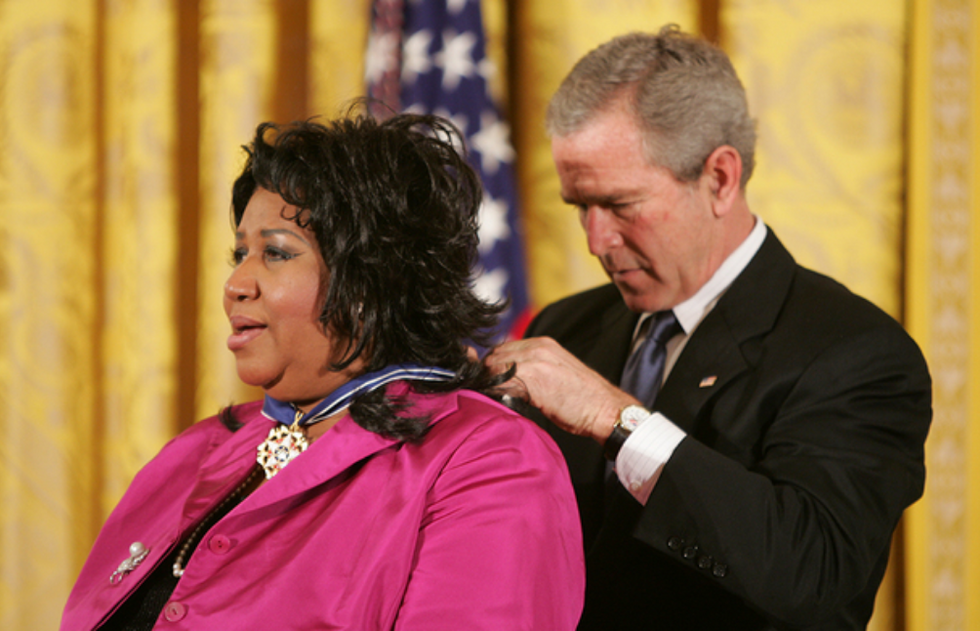 Alex Henderson
and
AlterNet
August 16, 2018 Human Rights
The Queen of Soul, Aretha Franklin, has died at the age of 76. Franklin, who had suffered from pancreatic cancer and other severe health problems, was among the most iconic and influential R&B singers of all time—and during the final days of her life, she was visited by R&B legend Stevie Wonder as well as veteran civil rights activist, the Rev. Jesse Jackson.
Many of Franklin’s hits, from “Chain of Fools” in 1967 to “Think” in 1968 to “Day Dreaming” in 1972, are staples of classic soul. Franklin’s contributions, however, were not only musical, but also, political—and she was an important figure in the civil rights struggles of the 1960s and 1970s.
Here are five of the Queen of Soul’s most important contributions to civil rights and politics in the United States.

Aretha Franklin was not the first soul icon to record “Respect,” which was written by Otis Redding and originally recorded in 1965. But when the Queen of Soul recorded her famous 1967 version, it became one of her most definitive hits. Although the song is mainly about respect in romantic relationships, it was adopted as a political protest anthem by both the civil rights movement and the feminist movement. The late Jerry Wexler, who produced Franklin’s version for Atlantic Records, asserted that it “had overtones of the civil-rights movement and gender equality” and “was an appeal for dignity.”

2. Franklin Embraced the Activism of the Black Church

Although Franklin has mostly performed secular music, her roots were gospel—and her father was the late Rev. C.L. Franklin, a Baptist minister who became involved in the civil rights movement and fought discrimination against black auto workers in Detroit. Rev. Franklin was a major influence on his daughter both musically and politically, and the Queen of Soul became involved in the progressive politics of the black church. During the Ronald Reagan era, far-right evangelists like the Rev. Jerry Falwell, Pat Robertson and Jimmy Swaggart became so prominent in the Republican Party that many liberals and progressives were turned off by organized religion. But it’s important to remember that the African-American church played an important role in liberal/progressive politics during the civil rights movement—and the black church was a vital part of Aretha Franklin’s life.

Franklin, a proponent of change through nonviolent protest, developed a close friendship with Dr. Martin Luther King, Jr. in the 1960s. And on February 24, 1967, King presented her with the Southern Christian Leadership Award for her work in civil rights.

4. The Queen of Soul Sang at Martin Luther King’s Funeral

With “Respect” burning up the charts in 1967, Franklin became a leading symbol of black pride in the music world—not unlike The Godfather of Soul, James Brown, with “Say It Loud, I’m Black and I’m Proud” in 1968. And on April 9, 1968, Franklin and gospel great Mahalia Jackson (one of her major influences) sang “Precious Lord, Take My Hand” at Dr. Martin Luther King, Jr.’s funeral.

On November 4, 2008—43 years after the assassination of Malcolm X, 40 years after the assassination of Dr. Martin Luther King, 45 years after the assassination of Medgar Evers—the U.S. achieved a milestone when President Barack Obama defeated Republican Sen. John McCain, becoming the U.S.’ first black president. It was a decisive victory: Obama won both the popular vote and the electoral vote. And while the victory hardly meant that the U.S. had become “post-racial”—a silly and naÃ¯ve notion given the country’s tortured racial history—it was powerful and historic nonetheless considering that the southern states still had racist jim crow apartheid laws when Obama was born in 1961. And in January 2009, when Obama was sworn in as president, the Queen of Soul performed at his inauguration.