'Paradigm of The Hysterical Woman': Doctors Are More Willing to Prescribe Pain Meds to ‘Rational’ Men Than 'Irrational' Women 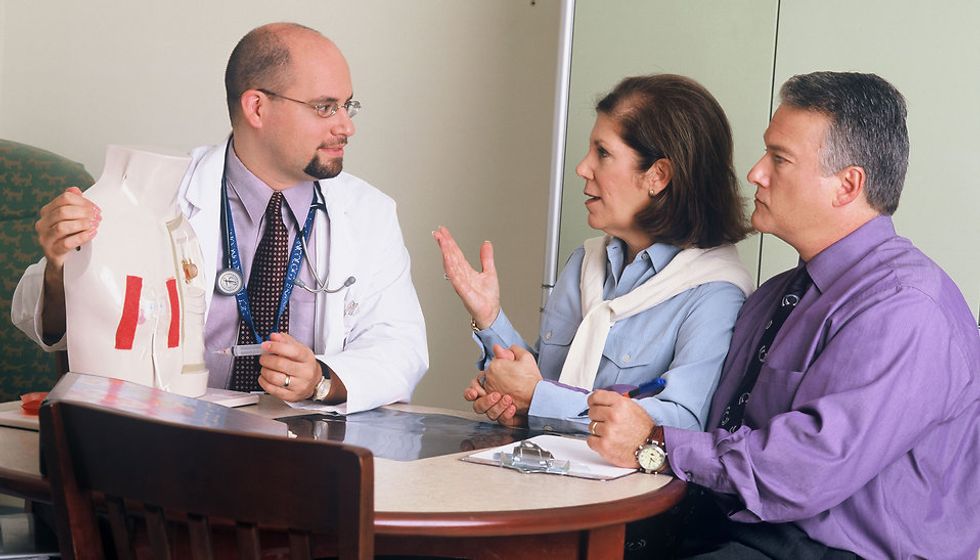 Amanda Stern is anxious. A native New Yorker, she spent her childhood, adolescence, much of her adulthood (and possibly the entirety of her walk over to meet me) in a kaleidoscopic state of mild to debilitating anxiety. Yet, as we sit in Maison May, a homey, intimate cafÃ© in Fort Greene, Brooklyn, eating an early lunch and chatting about her new memoir “Little Panic,” Stern is both warm yet sarcastic, unflappable yet neurotic, all while simultaneously emitting a low apprehensive buzz, like a tightly vibrating string.

Reading Stern’s book, anyone who grew up in the 1970s will recognize Etan Patz, the six-year-old boy who went for a two-block walk from which he never returned, not to mention that era’s total permissiveness, a supervision style which would later give rise to Just Say No in the Reagan '80s and then its bastard lovechild, helicopter parenting. Yet the disturbing details of the Etan Patz case incite and inform young Stern’s own childhood worries — will Patz be found, will she herself be taken, will her mother “disappear”? — as they mirror Stern’s childhood self’s unfulfilled desire to be seen and known.

“Little Panic” grips and discomfits in the best way. It is entertaining and sad and funny and relatable even as you wonder, where were all the adults of the '70s, and WTF were they doing? Were they all off punching pillows at EST or shtupping each other at Jewish resorts in the Catskills? And why didn’t anyone walk little Etan Patz to his damn bus?

“I’m the only one of my siblings I grew up with who’s anxious,” Stern informs me over an almond milk latte and a summer salad, artfully arranged on a butcher’s block. “When you have a lot of untreated, undiagnosed anxiety, it floods out of your brain and into your body and just sets up shop.”

Stern’s book is about how she navigated an undiagnosed panic disorder from childhood up to and through early adulthood, even though she was constantly undergoing rigorous diagnostic testing to uncover what was so “wrong with her.” There is also skillful dovetailing between Stern’s precocious Manhattan childhood and her early adult state of almost childlike worry. Meanwhile, this insidious anxiety burrowed and nestled into the crevices of her every experience where it bloomed and multiplied like a mold. Let’s just say, her early adult romantic relationships are no match for this untreated disorder and don’t fare so well.

Flash forward. It has almost become an accepted fact that anxiety manifests itself physiologically, not just in, say, panic attacks, but in stomach aches, which Stern suffered, as well as other physical and emotional symptoms. Whole industries have emerged to counter these effects, such as the wellness industry which caters mostly to, you guessed it, women! (Stern’s brother is a well-known yoga instructor.) The irony is that despite the rampant availability of sound baths, hot yoga classes and vagina steams for people of privilege, on the other side of the spectrum, i.e. the unenlightened medical community, there seems to be an obtuse lack of empathy, especially from male healthcare providers.

In their journal article “The Girl Who Cried Pain,” Dianne Hoffman and Anita Tarzian studied the effect of gender bias on pain management and concluded that doctors treat women “less aggressively” for pain than they treat men. It follows why wellness would have such a meteoric rise. Say what you will about Goop, rather than quackery or cultural appropriation or even a necessary supplement, wellness and all it entails is an attempt to fill a vast sinkhole of women crying out in the night to he healed and heard.

Researcher Karen Calderone found that doctors are more likely to prescribe women sedatives for pain where they would give men pain meds for identical pain levels. The reason for this disparity may be that there is a need to return women to a “rational state” from an “irrational” one, otherwise she might morph into Lucia di Lammermoor and bloody white-nightgown it. In other words, the fulcrum itself is also skewed.

For anyone who suffers from an auto-immune disease — 75 percent of whom are women! — it will not come as a surprise that many women report male doctors often disregard their physical symptoms and label said symptoms as psychosomatic, even though psychosomatic pain is real. What’s more, doctors often dismiss pain levels, particularly when it comes to women and children of color. Even I have had doctors tell me that I’m not experiencing specific side effects when I clearly am. (Points at bald patch.) The entire structure is set up to invalidate and/or gaslight you.

“Like the Greeks and the wandering womb!” I add.

Note: Maison May is almost empty. We are the only people in it who are actually speaking and NOT in our inside voices; the other customers, two white dude-bros grimly typing away on their MacBook Pros probably writing articles for BuzzFeed about how “Billions” is the best show on TV. As Angelina from “Jersey Shore” would say, “Um, HELLO!”

“Why is my experience being dismissed?” Stern asks, taking a hearty bite of oily butter lettuce. “Psychosomatic illnesses are real. If you’re in pain, you’re in pain.” I nod and nibble my granola.

“When doctors discount their female patients, they are systematically reinforcing the negative stereotypes of women as unreliable narrators of their own stories," Stern continues. "When your doctor doesn’t believe you, you become enraged with your own sense of invisibility, which presents as emotional, and it’s this female expression of anger about being dismissed that is then pathologized. We’re part of a loop that cannot exist without the doctor, yet women are the ones who suffer the consequences, both medically, emotionally, and as in my case, over the course of a lifetime.”

But a woman’s pain isn’t her own. It too belongs to the various power systems that are still, 5,000 years later, controlling the narrative. Our narrative. As bad as this may be for cisgender straight white women, it is exponentially worse for trans women and women of color. But that no one is listening to any women at all seems to be a given. The levels of this obliviousness when it comes to obvious psychological symptoms and their ramifications are startling as well as detrimental. The more Stern underwent specialized testing — and she had it all, like every test ever invented and then some, and “Little Panic” is peppered throughout with the transcripts of her actual tests — the more she came to believe that she had a disorder so rare and humiliating that she had stymied an entire island of expensive specialists. With nothing but contrasting misdiagnoses, she was left traumatized by the enduring mystery.

The feeling, that of the self withheld, like a tape outline of a body in a crime scene, pervades. For example, as Stern waited for critical response to this book, which has been extremely positive, or in dating scenarios. “I knew when I was getting tested it was because I was so worried,” she tells me. “But I didn’t belong in their reality. I knew that my reality was different. Not one adult was seeing or hearing me! I didn’t exist!”

The dude-bro regards us warily from the next table. Who are these two loud, middle-aged Jewish women screaming about reality when he’s trying to read a very informative VICE article the benefits of CBD oil? Wait, is he anxious too?

Meanwhile, Stern does not look middle-aged. She doesn’t look any age. With her wavy hair and her vintage tee, I almost feel like I’m reuniting with one of my friends from Jewish sleep-away camp, except my friends from camp all have blowouts and are married and living in Roslyn. Their kids are all at Brandeis. Stern is single and lives in Brooklyn. She doesn’t have kids yet and neither do I which is either a thing or not a thing, depending on the day.

There’s something about the way Stern crystalizes the experience of childhood psychology that’s especially astute. While much has been said about the injustices inherent in educational testing and racial bias, here Stern confronts gender bias and how these tests, and indeed all standardized tests, are static where humans are fluid. Basically it’s all a bunch of BS humans should discard so we can destigmatize the whole process and focus on the individual. And when I said focus, I meant focus, people. And by individual, I meant girl.

“People who do well on tests are people who take tests well,” Stern asserts. “The system is rigged to favor those people, and to disadvantage others, which does not make those others inadequate, yet that’s how they are made to feel, and that feeling grows to become a person’s reality. Intelligence and personality cannot be measured. How can an evaluator know that the way someone answers or doesn’t answer a question means what they think it means? What if it means the taker was cold? What if it means the taker had to go to the bathroom?”

We laugh, but are we really laughing? This is the meat of the matter. The sad and limited reality that belongs to another. I think of gender bias in sports medicine. Or women and heart disease. How, for a long time, most of the heart studies were done on men, even though women obviously also get heart disease. This egregious omission still has lethal consequences. I take a sip of my cold brew and ask Stern if there will ever come a time when women’s symptoms will be taken seriously. She snorts then eyeballs me and says, “They will eventually, but we’ll be dead.”