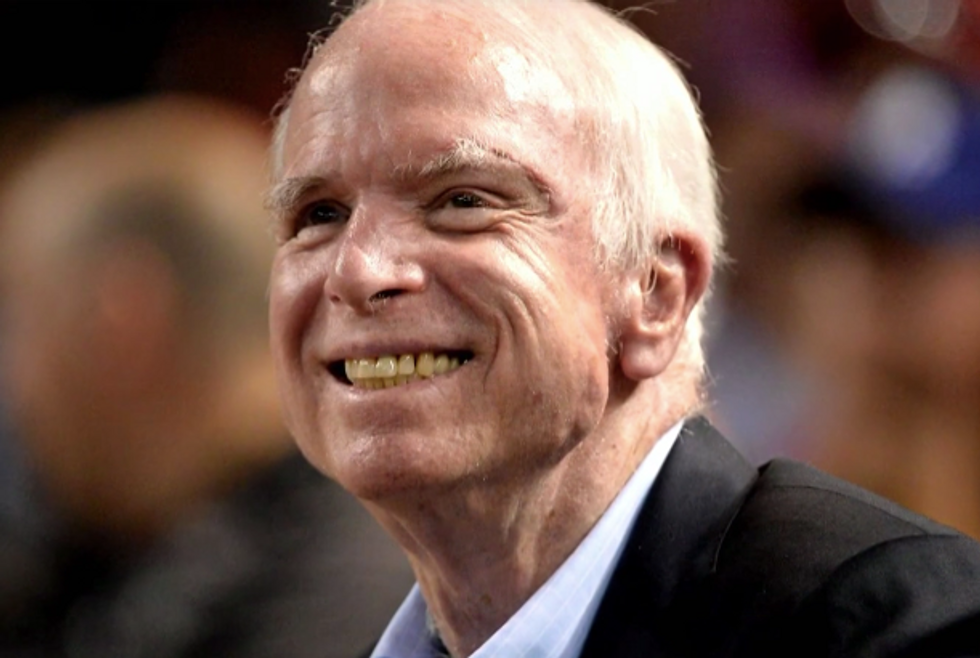 With the death of Arizona Sen. John McCain at the age of 81 on August 25, Congress has lost someone who could—on occasion—be an important swing vote in the U.S. Senate. McCain, a self-described “Goldwater Republican,” was never a liberal or even a moderate/centrist. But occasionally, McCain would cross party lines and vote with Democrats; for example, it was McCain’s vote that, in 2017, saved the Affordable Care Act of 2010, a.k.a. Obamacare, from being overturned. And between McCain’s death and Sen. Jeff Flake’s decision not to seek reelection, Arizona will have two new faces in the U.S. Senate in 2019.

Under Arizona law, Gov. Doug Ducey (a Republican) must appoint a temporary replacement for McCain—although Ducey has said he won’t be making a decision until after the funeral. That replacement will maintain the seat until 2020, when a special election will be held—and under law, whoever Ducey picks to replace McCain must be a Republican.

McCain’s death won’t change the Republican/Democrat balance in the Senate in 2019; legally, Ducey couldn’t pick a Democrat for McCain’s seat even if he wanted to. But an Arizona Senate race taking place this year could alter that balance: the race for Sen. Jeff Flake’s seat.

Flake has one major thing in common with McCain: he is, like the late Vietnam War veteran, a right-wing Arizona Republican who has been a frequent critic of President Donald Trump. And like Rep. Paul Ryan, speaker of the U.S. House of Representatives, Flake decided not to seek reelection in 2018—although unlike Ryan, Flake has been so outspoken against Trump at times that he has incurred the wrath of Trump supporters (including Fox News contributor Tomi Lahren, who denounced both McCain and Flake as RINOs or Republicans in Name Only at an August 24 rally for far-right Arizona Senate candidate Kelli Ward).

The frontrunner in Arizona’s 2018 GOP Senate primary is 52-year-old Martha McSally, who has been representing Arizona in the U.S. House of Representatives for two terms. McSally is decidedly right-wing, but she isn’t as much of an extremist as the other Republicans she has been competing within the primary: former Maricopa County Sheriff Joe Arpaio and former Arizona State Senate Kelli Ward, who challenged McCain in a 2016 GOP Senate primary but lost.

There was no love lost between Ward (a major Trump supporter) and McCain, who she considered a RINO. After McCain announced, in July 2017, that he had been diagnosed with brain cancer, Ward called for his resignation and asked Ducey to consider appointing her to McCain’s seat.

According to various polls, McSally is likely to win Arizona’s GOP senatorial primary—and if she does defeat Ward, McSally will be competing with Democrat Kyrsten Sinema (who has also been serving Arizona in the U.S. House of Representatives) in the November midterms. Democrats want Flake’s seat badly, to say the least, and are encouraged by how well Sinema has been polling.

A late July poll by the Phoenix-based OH Predictive Insights found Sinema leads McSally by 4% in a hypothetical Sinema/McSally matchup. And when Sinema is competing with Ward or Arpaio in hypothetical matchups, she wins by double digits. But even the best polls—truth be told—have a 5% margin of error; so a Sinema/McSally race could be close, whereas polls indicate that Sinema could more easily defeat Ward or Arpaio.

Democrats haven’t won a U.S. Senate seat in Arizona since 1988. And if Sinema wins in November, it would be the first time Arizona elected a Democrat to the U.S. Senate in 30 years.

Although Democrats are feeling increasingly optimistic about their chances of regaining the U.S. House of Representatives in November—even with all the gerrymandering and voter suppression tactics that Republicans have been resorting to—regaining the U.S. Senate would be an uphill climb for Democrats, who would need to maintain every Senate seat they are defending in 2018 and pick up at least two seats Republicans presently hold.

McCain’s seat will remain in Republican hands until at least 2020, and Flake’s is a possibility for Democrats—and if Democrats could maintain every Senate seat they presently hold while claiming victories for Sinema in Arizona and Jacky Rosen in Nevada (where Rosen is running against incumbent Sen. Dean Heller), they would have a majority in the Senate in 2019. But that is a major “if” because some Democratic Senate incumbents are facing very tight races, including Claire McCaskill in Missouri and Bill Nelson in Florida.

With McCain’s death and Flake’s resignation, Arizona’s presence in the U.S. Senate will be looking different in 2019—and if Sinema performs well in November, one of those seats might be held by a Democrat next year.