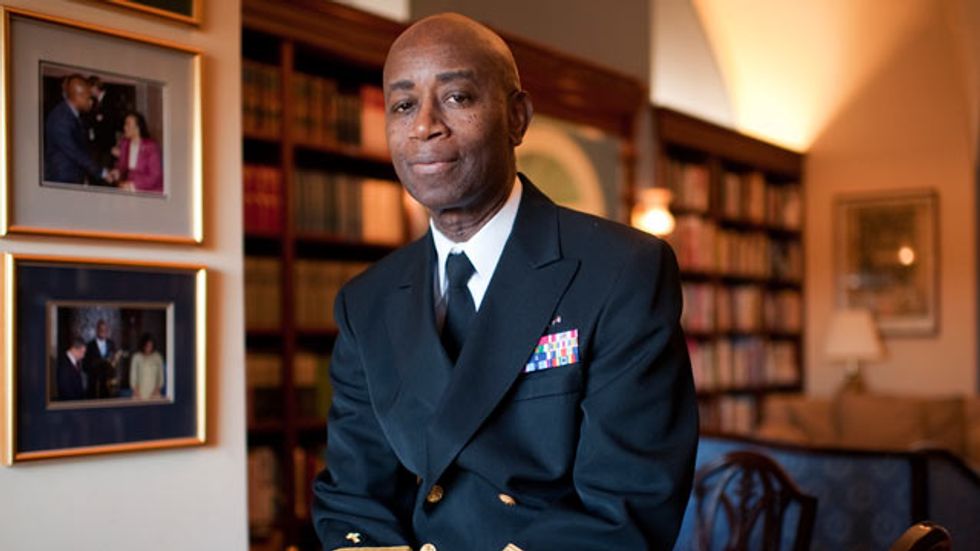 On Tuesday of this week, a fundamentalist prayer group associated with U.S. Senate chaplain Barry Black published what is known as an imprecatory prayer. It began: “Father, we ask that You take down Mikey Weinstein and his FFRF [sic] group," an apparent reference to Weinstein's group, the Military Religious Freedom Foundation, and the 22-page complain it recently filed against Air Force Brig. Gen. John Teichert, as Salon reported last weekend. The MRFF complaint alleges serious violations of Air Force regulations stemming from Teichert's online ministry, and was filed on behalf of 41 clients, 32 of whom identify as Christian.

To underscore the prayer’s apparent threat, it ineptly quoted Psalm 37:22: "For those who are blessed by Him shall inherit the earth, but those who are curses [sic] b [sic] Him shall be cut off." That's an approximate quotation from the King James Bible; in numerous other translations the word "destroyed" is used in place of "cut off."

Weinstein has previously described such “imprecatory prayers" as "code words" used by the Christian far right to "troll for assassins," or at least to legitimize possible acts of violence. “We view this as a clear and present threat against me, my family and the foundation, and we take it very seriously,” Weinstein told Salon.

Weinstein's organization, which is not popular among fundamentalist members of the military, has received previous threats, he said. “But this one is inextricably intertwined with the U.S. Senate, and that is intolerable.” His lawyers are drafting letters to Senate Majority Leader Mitch McConnell and others, he says, demanding redress.

One MRFF staff member has resigned this week, Weinstein said, "because of pressure from his or her family over the threats that these individuals face, even in their own homes, for being connected with MRFF." And that was before the emergence of this potentially threatening prayer, he added.

What's the connection between that prayer asking God to "take down" Weinstein and the U.S. Senate? Capitol Hill Prayer Partners, the group that issued the prayer, "has served in on-site prayer under the full blessing of the Office of the Chaplain of the United States Senate" since its founding in 1994, according to the online biography of Sara Ballenger, its founder and president. Chris Rodda, the MRFF's director of research and author of "Liars for Jesus," a survey of religious-right fake history, confirmed that the group holds a semi-official status on Capitol Hill.

"We intend to have our legal counsel send a demand letter to the majority leader of the U.S. Senate, Mitch McConnell, demanding that they completely disengage with this fundamentalist Christian terrorist organization," Weinstein said. A similar letter will be sent to retired Navy Adm. Barry Black, the current Senate chaplain.

Weinstein says he plans to send a separate "demand letter" to Ballenger at the listed address of Capitol Hill Prayer Partners in Herndon, Virginia, demanding "that she cease and desist" and take down the prayer in question. "In addition, we intend to have a counsel reach out and file an official complaint with the U.S. Capitol Police," he said.

In an email to Salon, Rodda cited a report on the 2014 event to celebrate the 20th anniversary of Capitol Hill Prayer Partners as further evidence of the group's “close relationship with Chaplain Barry Black, in the form of both a personal note from Black to Ballenger and the fact that Black was a speaker at this Capitol Hill Prayer Partners event.”

According to Rodda, Ballenger has a lengthy history of associating with fringe religious positions and dubious figures, especially on the anti-Muslim far right. It's unclear whether Black, the Senate chaplain, is aware of this. Rodda found the report about Capitol Hill Prayer Partners' 20th-anniversary event, for instance, on the website of Koome Ministries, which was founded by a man named Kamal Saleem, who was keynote speaker at the event.

Saleem was one of a trio of "self-proclaimed former Muslim terrorists" who became celebrities on the Christian right, Rodda explained, but were later exposed as frauds. Saleem enthralled right-wing audiences with his implausible tales of working for Yasser Arafat, Moammar Gadhafi and Saddam Hussein before finding Jesus, but there's no evidence that any of them were true. He appears to have been an evangelical Christian for many years before outing himself as a supposed former terrorist.

MRFF had pursued "these Islamophobic fraudsters since 2008, when they were hired to speak at the Air Force Academy,” Rodda wrote to Salon. In 2011, the "three ex-terrorists" became the focus of an investigation by CNN's Anderson Cooper. Rodda wrote about them again at that time in an article for the Huffington Post. Nothing about their stories made sense, but they were key players in a widespread propaganda campaign whose constituency was eager to believe them, so it took sustained effort to discredit them. (A big-picture account can be found in "Terrified: How Anti-Muslim Fringe Organizations Became Mainstream"; Salon author interview here.) And even three years after being exposed as a near-certain fraud, Saleem was CHPP’s keynote speaker.

“The U.S. Senate should not be engaged with someone like this,” Weinstein said, “asking God to kill people and destroy them.”