Media Matters
and
Cydney Hargis
May 02, 2018The Right Wing

The 2018 National Rifle Association (NRA) annual meeting in Dallas, TX, will spotlight a gun line sponsored by NRA board member Ted Nugent, who branded the product his “American spearchucker series,” a reference to an obscure racial slur used to disparage Africans.

The multiday meeting, which begins May 3, will feature exhibits in which manufacturers of guns, ammunition, firearm parts and accessories, and tactical gear can showcase their merchandise. Additionally, the meeting will feature several speaking events, including a May 4 “Leadership Forum” where President Donald Trump and Vice President Mike Pence will speak.

Aagil Arms -- a “sister company of Tuff Zone and the official manufacurer (sic) of the Ted Nugent Signature Series upper assemblies” -- will be featured in the meeting’s exhibit hall. According to an image of the product's packaging Nugent posted on Facebook in December, the line is officially called “Ted Nugent’s American Spearchucker Series AR15-style Upper Kits.” An "upper," terminology for an upper receiver, is a firearm component that is used, along with other parts, by enthusiasts to assemble their own custom weapons.

A product ad posted on the annual meeting website includes an image of a Facebook post by Nugent that calls the series “Custom Ted Nugent zebra and red white & blue American spearchucker artwork”: 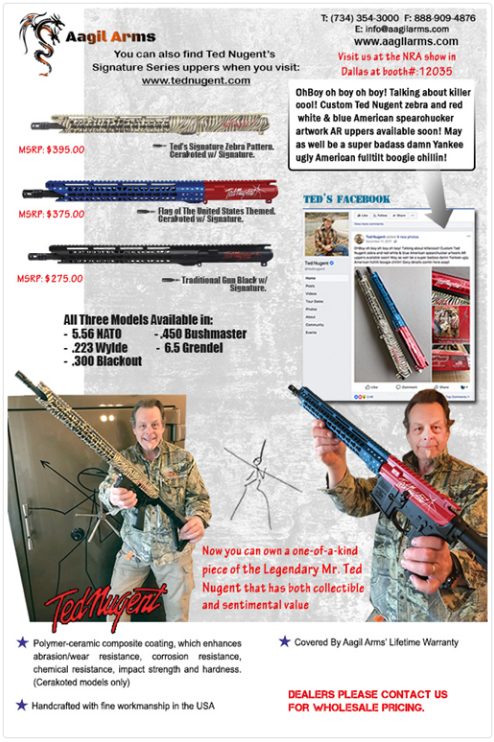 Nugent is no stranger to using racial slurs. He has repeatedly used the N-word, called then-President Barack Obama a “subhuman mongrel” in 2014, and once defended apartheid in South Africa while calling African people “a different breed of man” who “still put bones in their noses, they still walk around naked, they wipe their butts with their hands.”

Nugent on April 30 tweeted that he will “see you all in Dallas standing against tyranny.” He has caused controversy during past annual meetings for comments he has made, including his 2012 statement that he would be “dead or in jail” if Obama was re-elected, and his 2015 comment about shooting then-Sen. Harry Reid (D-NV) during a speech and offer to “pilot” a boat that would take Obama to Kenya.