As Vladimir Putin weakens, so does the integrity of the Russian Federation

Who knew? A “woke” army, one in which people understand the differences that make all of us unique, and build unit cohesion by respecting those differences, is a good thing. Over the weekend, three Muslim Russians opened fire at a mobilization site, killing at least 30 soldiers of Sen. Ted Cruz’s favorite anti-woke Russian army. They responded after being bullied about their religion.

The following is a translated interview of a Russian service member who witnessed the attack:

It all started when some of our soldiers - a Dagestani, an Azerbaijani and an Adyghe - said that 'this is not our war' and tried to write a report saying that they did not want to serve anymore. Lieutenant Colonel Andrei Lapin, when he learned this through the company commander, gathered everyone and started to say that 'this is a holy war.' Everything happened in the morning at the parade ground, where the formation takes place, the anthem is sung. A conflict broke out, people started pushing each other, including a few from my company. The Tajiks told Lapin that a holy war meant [only] a war between Muslims and infidels. Lapin said that "Allah must be a coward if he does not allow you to fight for the country to which you took an oath". I personally think that's what hurt the most, the phrase that 'Allah is a coward.' The phrase shocked a lot of people - those who were standing there on the parade ground. Because we also have Muslims among our officers, both Bashkirs and Tatars. After the formation, the Russians and Muslims continued the conflict, after which everyone dispersed and, it seems, calmed down. And an hour and a half later, around lunchtime, they sent us all to the firing ranges, and three of the Tajiks, who were on contract service, brought their automatic rifles, they had live ammunition, and shot our commander, Lieutenant Colonel Lapin, he died on the spot. And they started shooting indiscriminately. At the range, there were both contract servicemen and mobilized. I saw only the dead, of whom there were 29 people. The 30th is Lieutenant Colonel Lapin. This does not include two of the Tajiks; counting them too, there were 32 killed. I do not know exactly how many are wounded, some of them have already been taken by helicopter to Belgorod, and some of them are in Valuyki now with me.

This ethnic Russian soldier got off easy after threatening ethnic Kazakhs. Warning, guy gets pummeled in the video:

Ethnic, racial, and religious fissures are increasingly out in the open, as Russians in the hinterlands realize they are being sucked dry by the Moscow elites, doing most of the dying, and sacrificing most of their men. Many are doing the previously unimaginable and speaking out against the injustices. Here is the governor of the Islamic region of Dagestan:

We’ve already seen Russia’s neighbors more aggressively stand up to Russian dictator Vladimir Putin, telling him off to his face. Given the sorry state of Russia’s crumbling army, there is little reason to fear reprisal. No VDV airborne troops are landing in another foreign country anytime soon. The remnants of those units are currently stuck in Kherson, and there aren’t many guys left.

But that might not be Putin’s worst nightmare. Russia’s official name is the “Russian Federation,” and that conglomeration of regions presents massive potential for unrest. 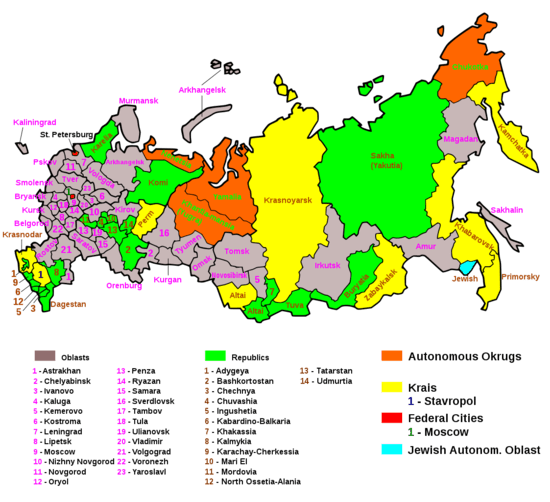 (A bigger version of the map below can be found here.)

There are 83 federal subjects in the Russian Federation—oblasts, republics, okrugs, federal cities, and the “Jewish autonomous oblast” created by Stalin to entice Russian Jews to settle the empty region. (Only 0.2% of the oblast remains Jewish.)

Oblast are like provinces or American states, same as in Ukraine. Okrugs are similar, but populated by indigenous people. There are two federal cities—Moscow and St. Petersburg, because of course the elite will make sure to set themselves apart from everything around them.

And then there are the Republics—these are areas populated by non-ethnic Russians, with the supposed right to their own official language, constitution, and legislature. It is here that Russia’s control has depended on Rosgvardia thugs (Putin’s national guard) to maintain order and control. Those guys have been decimated in Ukraine.

I have only rudimentary knowledge of these regions and their individual allegiances (or lack thereof) to Moscow, but Dagestan is particularly restive right now, Chechnya has a proven history of rebellion, and we just saw Tajik Russians wipe out 30 mobilized ethnic Russians in that one attack (Muslim mobilized were warned ahead of time to steer clear of the kill zone).

The weaker Moscow becomes, the greater the chance that many of these “republics” and other regions demand greater autonomy or independence from Moscow, and there are plenty of regional powers who might happily support such activities, either out of regional power plays (Turkey, Iran, and China) or ethnic/religious allegiance (Tajikistan, Kazakhstan, and other Central Asia republics). Western powers might find it hard to steer clear, particularly given the presence of nuclear weapons in many of these regions. It could get ugly and bloody. Sometimes the only thing keeping internal conflict at bay is repression and autocracy, like we saw in Iraq and Libya.

A shattered Russian Federation is such a fearful scenario, it’s likely a factor in Western Europe’s repeated desire to offer Putin an “off-ramp.” The Putin we know might be far better than an ethno-religious conflict spanning the entire length of today’s Russia. Heck, if Russian scholar Kamil Galeev is right, a Federation breakup might not even need the ethnic or religious spark

HIs long-running thesis is simple: Moscow and St. Petersburg have sucked the rest of the country dry. We see it in the yachts and Italian villas, and the missing 1.5 million winter coats that were supposed to keep their own soldiers warm this winter. As such, even ethnically Russian regions have a valid grudge against a Russian ruling elite who have intentionally kept them economically destitute. There’s a reason Russian soldiers are carting off washing machines.

With the mobilized already dying just two weeks after getting drafted, Putin may face his own winter of discontent, as the historically passive Russian people finally reach their breaking point. And wouldn’t it be ironic if the man who invaded Ukraine out of fury at the dissolution of the Soviet Union, then created the conditions for the final collapse of the Russia state?

We supposedly have the first video of the Russian side of a GMLRS strike.

I do wonder if they’re really using $100,000+ rockets against dirt trenches. These could be Soviet-era MLRS, as Ukraine has plenty. Also, what kind of dumbass would rather record the incoming rockets than duck?

Can you imagine being Russian, seeing your army get mauled, and then thinking it has anything to do with American domestic politics?

Ukrainian advances are utterly irrelevant to people’s voting decisions November 8, but it’s a fascinating insight into the Russian mind—everything is a conspiracy involving nefarious American and NATO actors. God forbid they confront the truth, that they’re getting their asses handed to them by a Ukrainian nation they assumed inferior.

GreyZone is the Telegram channel run by Wagner mercenaries, one of those rumored to be under investigation by authorities in Moscow for sometimes spilling the truth. While other targeted Telegram channels have mostly fallen in line this past week, GreyZone appears less interested in doing so. In addition to casting shade against Russian proxies in Luhansk and Donetsk, they are now praising their Ukrainian opponents:

Wagner almost always fights alone, it’s more reliable. The situation near Bakhmut is stably difficult, the Ukrainian troops are putting up decent resistance and the legend of the fleeing Ukrainian is just a legend. Ukrainians are guys with the same steel balls as us … and that’s not bad. We Slavs should be proud of it.

Given that Wagner has been beating their head against Ukraine’s Bakhmut defenses for over two months now, it goes without saying that Ukrainian troops aren’t doing any fleeing.

This is so painfully cringe:

HIMARS doesn’t stand a chance against their, uh, choreography.

Someone gave the video better music.

If you’re wondering what’s happening down in Kherson, join the club. Strict operational silence has put a lid on any information.

Relating to the picture at the top of this update:

That’s how old I was living in the middle of a civil war in El Salvador. I’ve carried it my entire life.

Click here to donate to help those escaping Putin's illegal invasion of Ukraine.