How Elise Stefanik transformed from defender to demolisher of democracy: report

United States Congresswoman Elise Stefanik (R-New York), who chairs her party's conference in the House of Representatives, has morphed from a champion of democracy into a willing participant in former President Donald Trump's ongoing efforts to destroy it, National Public Radio's Zach Hirsch explained on Monday.

Stefanik condemned Nicaragua's "consolidation into dictatorship" and stressed the urgency of "promoting and strengthening democracy around the world."

Yet her actions in Congress have created a stark dichotomy for the third-most-powerful Republican on Capitol Hill.

Stefanik "voted to overturn the results of the 2020 presidential election. In the weeks before the Endowment's award ceremony, her campaign published a controversial Facebook ad making an unfounded accusation: that 'Radical Democrats' are colluding with immigrants to stage 'a PERMANENT ELECTION INSURRECTION,'" Hirsch explained.

Consequently, Stefanik has emerged as a voracious critic of the bipartisan House Select Committee to Investigate the January 6th Attack on the Capitol, telling Newsmax in a recent interview that "we want to make sure that every American knows that this is not a serious investigation. This is a partisan political witch hunt."

Stefanik also parrots the same conspiracy theories that Trump exploited to gin up his supporters to ransack the Capitol as well as those broadcast by right-wing media outlets.

Two days before the insurrection, she said that "tens of millions of Americans are rightly concerned that the 2020 election featured unprecedented voting irregularities, unconstitutional overreach by unelected state officials and judges ignoring state election laws, and a fundamental lack of ballot integrity and ballot security."

Furthermore, her remarks about Great Replacement were widely condemned as having contributed to the racially-motivated mass shooting at a grocery store in Buffalo, New York in May that left 10 Black people dead.

Hirsch noted that Stefanik's "statements and actions have prompted some of the Endowment's staff to demand her removal from her leadership role. But when her position on the board expired in 2022, she was renewed for another term."

Endowment staffers, Hirsch pointed out, are disenchanted by Stefanik's march toward authoritarianism.

In a letter shared with NPR, they described Stefanik's views as "upsetting in the extreme" and that "nothing could be more incompatible with the democratic values which are enshrined in the Endowment and its sacred mission."

It is our desire to know how it could be possible that Representative Stefanik will remain part of the NED board of directors following her abuse of office in ways that contradict NED's core values in the starkest terms, and what steps will be taken to resolve this contradiction. 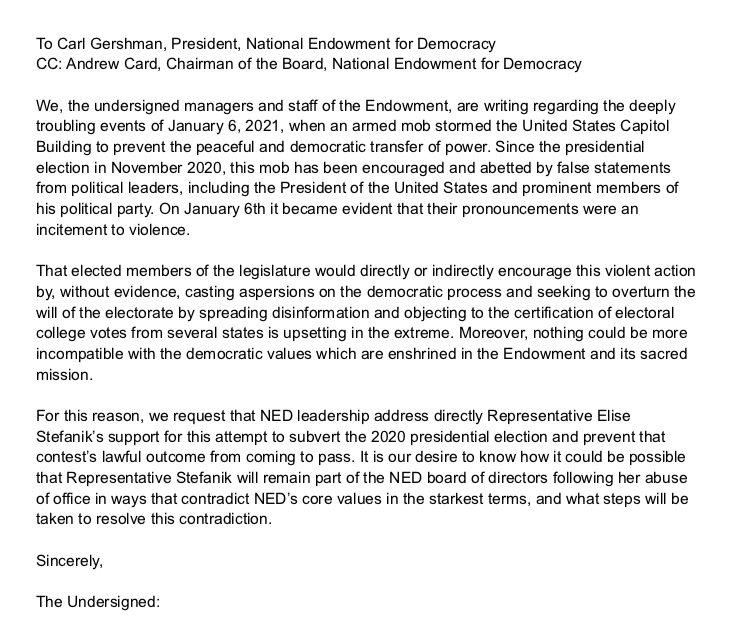 An image of the letter staff sent to the National Endowment for Democracy's leadership on Jan. 7, 2021. It was addressed to Andrew Card and Carl Gershman, who are no longer at the organization.