She had a natural remedy for everything — except COVID

Red thought “natural” remedies were the cure-all for everything. 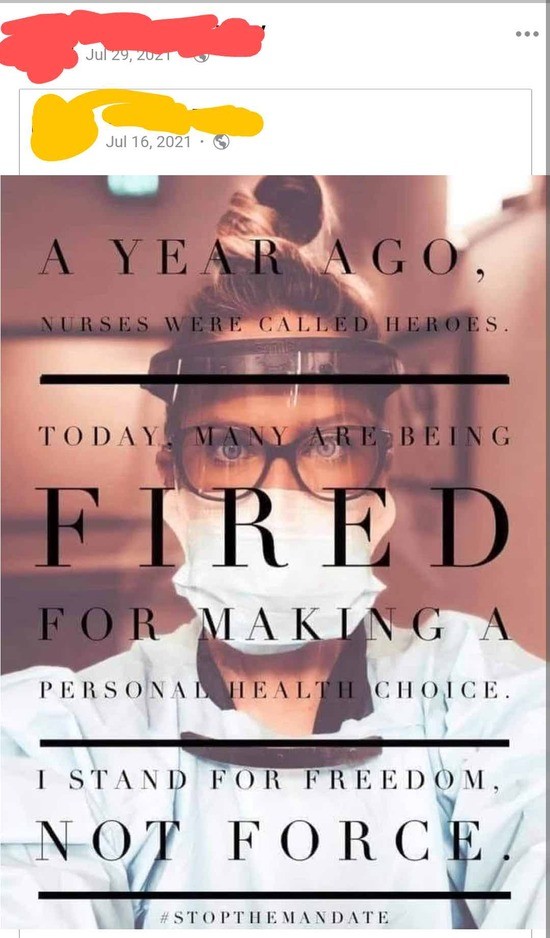 Not the ones who endanger their patients by refusing to vaccinate during a global pandemic that’s killing millions. Definitely not those. But the 99%+ that are still trying to clean up the mess the anti-vaxxers have created? They’re the biggest heroes. 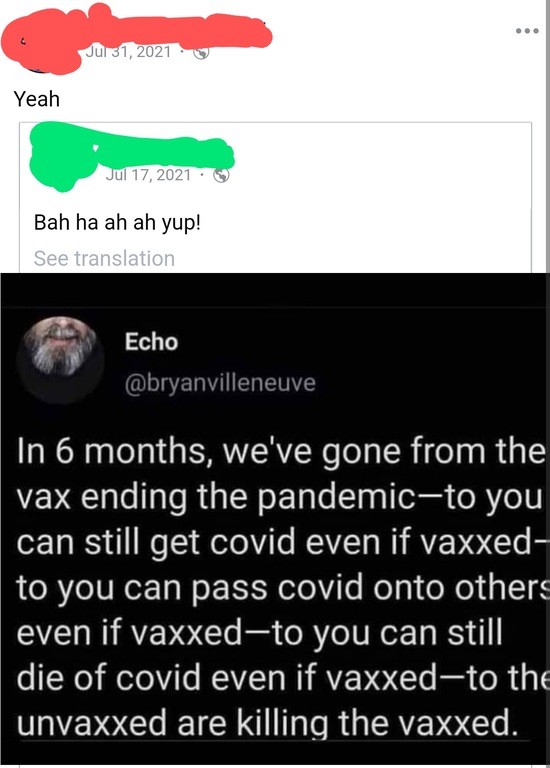 It really is ironic that us vaccinated people wear masks to prevent the assholes from suffering the worst consequences.

But yes, there are those who are older, who are immunocompromised, and who are simply unlucky, that did everything right and vaccinated, and yet suffered serious illness or death because of the rank ignorance and selfishness or this country’s conservative movement.

Oh, you asthma sufferers are in luck! You don’t need an inhaler anymore! When your lungs lock up, just get yourself some apples, carrots, garlic, spinach, and lemon, and you’re good to go!

And no more having to worry about the cost of insulin!

Just make sure your food is live. Once the food dies, it no longer cures high blood pressure or cancer or “every single illness.” 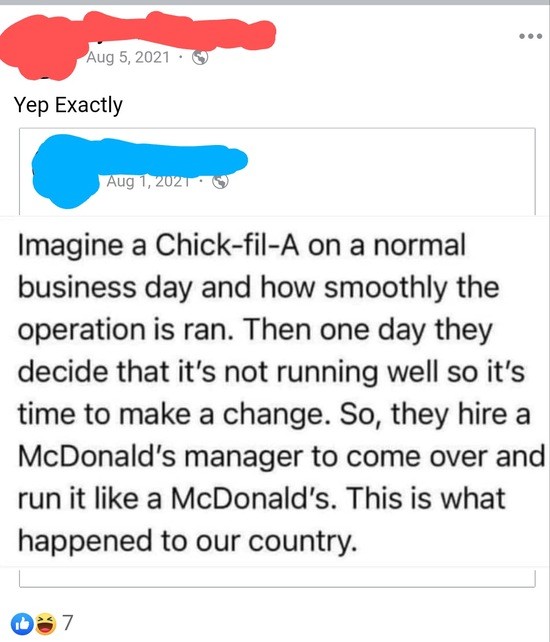 McDonald’s is the largest, most successful restaurant company in the world. So, uh, imagine a fast-food manager goes and manages another fast-food joint.

On a serious note, I looked it up:

This may be controversial, but other than Starbucks, this list is full of gross. (I see you, New Englanders, ready to defend Dunkin’s honor...)

So this is obviously false. But here’s how this bullshit claim began:

Emerald Robinson, a reporter for the conservative outlet Newsmax who has a history of spreading dubious claims, tweeted to her 400,000 followers on Aug. 5: “The CEO of Pfizer had to cancel a planned trip to Israel because he was not fully vaccinated. Let me repeat: BECAUSE HE WAS NOT VACCINATED.”
Robinson included a link to an article with a headline similar to her tweet. But that article was published on March 7, three days before Bourla’s second shot. The article noted that Bourla had received his first shot at that point and planned to reschedule a trip to Israel, which has relied heavily on the Pfizer vaccine.
About 3.5 hours after her original post, Robinson added an update acknowledging Bourla’s tweet about his second dose.
But her misleading claim had already been turned into a screenshot meme circulating on other social media sites, including Instagram and Facebook.

All you need to do is make a bullshit claim for three hours, and the lie will live on forever. Facebook allows bullshit to live forever. Even their warning label on that post says it’s “missing context,” instead of flatly calling it out as horseshit. The “context” is that it’s flat-out wrong. 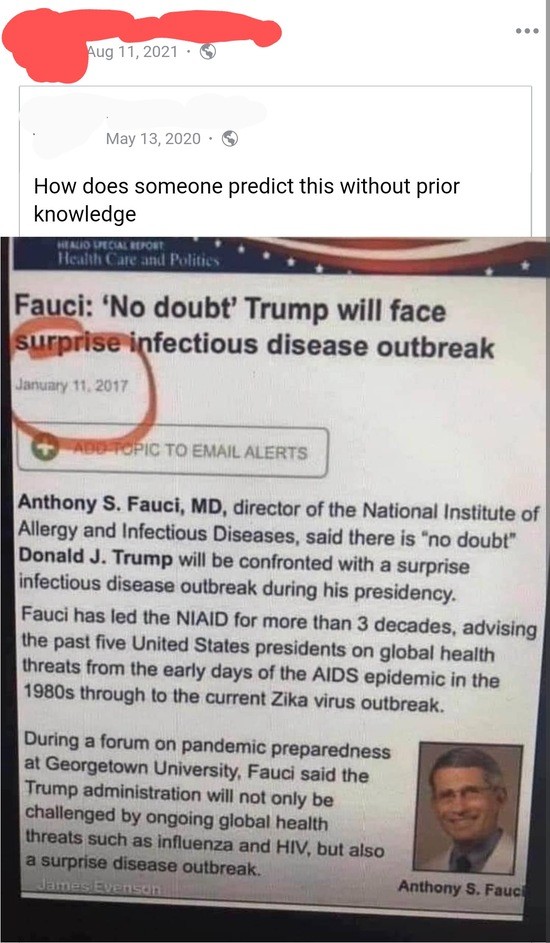 Riddle me this: How does someone make a prediction without prior knowledge?

How is that possible? HOW?

A prediction must have prior knowledge. Say you want to predict who wins the Super Bowl, you must wait for the game to be over, and then make your prediction.

Oh look at that, she’s in the hospital. Thankfully, her nurses are vaccinated. 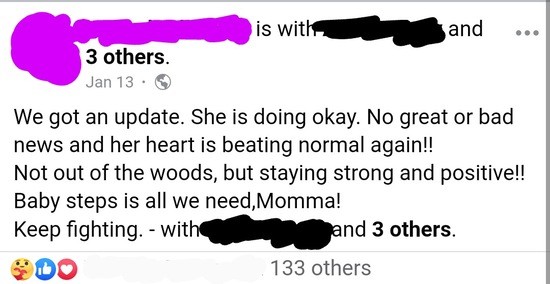 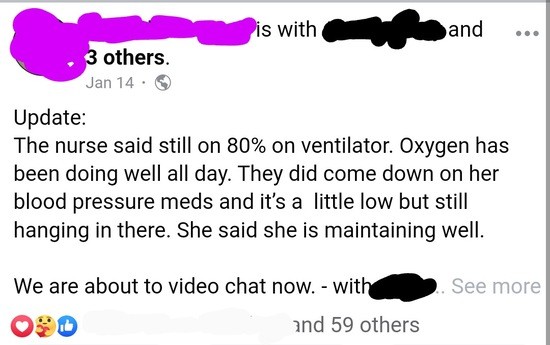 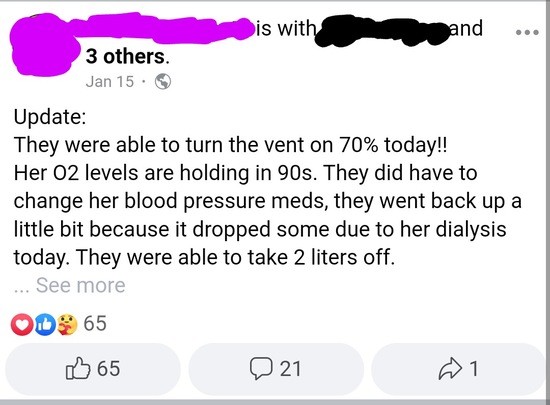 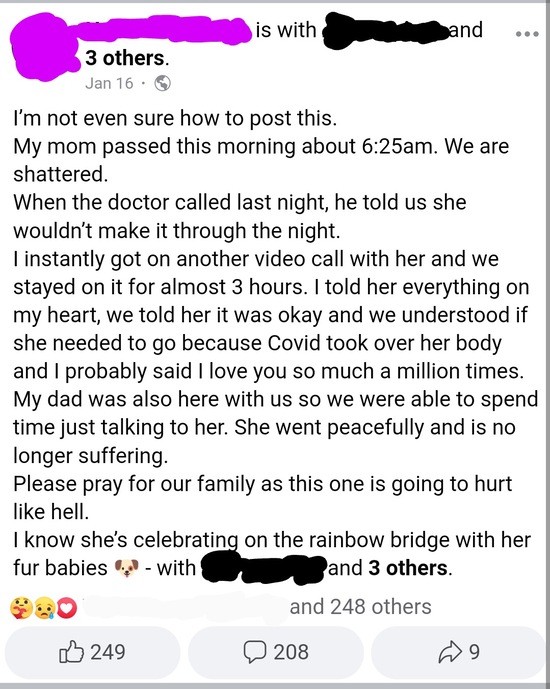 Back in August, she posted this: 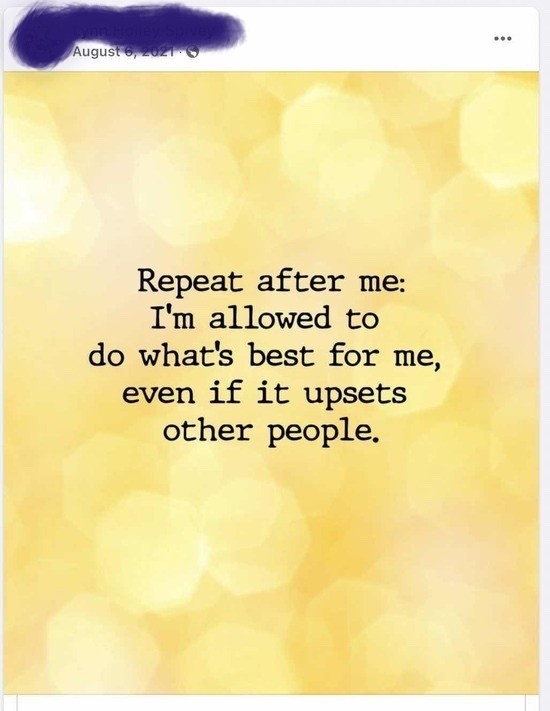 She was obviously talking about vaccination. But remember that famous story about the Trump administration’s hurricane response in the Florida panhandle?

The shutdown on top of the hurricane has caused Ms. Minton to rethink a lot of things.
“I voted for him, and he’s the one who’s doing this,” she said of Mr. Trump. “I thought he was going to do good things. He’s not hurting the people he needs to be hurting.”

Conservatives pathologically want other people to hurt. Here, our protagonist was totally fine with her decision upsetting/hurting other people. She celebrated it, bragged about it on Facebook!

Little did she realize that the people she’d be upsetting would be her own loved ones.