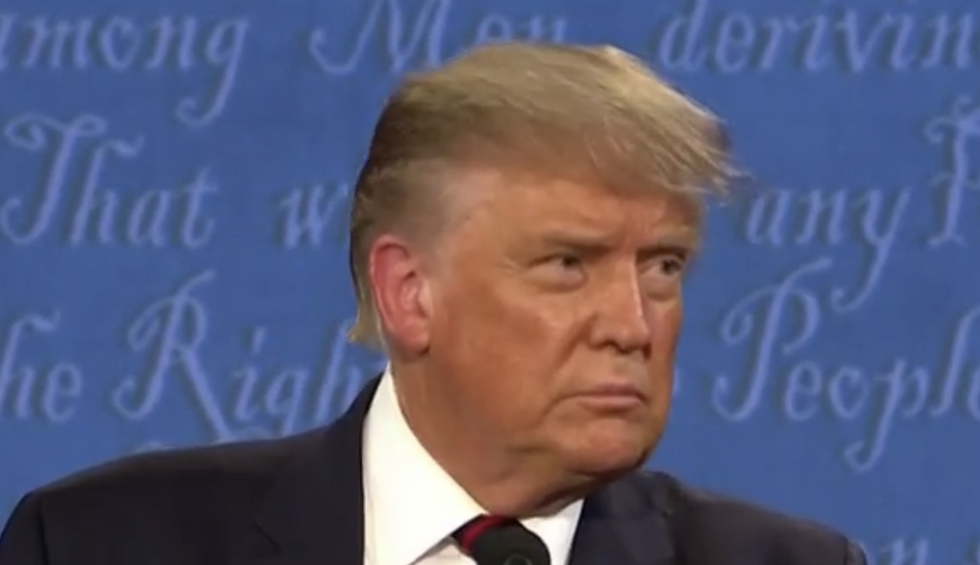 MSNBC’s Chris Hayes went in on former President Donald Trump after it recently came to light that the twice-impeached, one-term president appeared at rallies, meetings with Gold Star families, a party for a Supreme Court nominee, and even the first debate with then-candidate Joe Biden—all while knowing full well he had tested positive for COVID-19.

The timeline as laid out by Hayes shows dereliction of duty even more repugnant than usual for Trump.

According to a memoir by Trump’s chief of staff, Mark Meadows, titled, The Chief’s Chief, before Trump tested negative for COVID-19 on Sept. 26, 2020, he tested positive—nearly a week before he publicly disclosed his condition.

But instead of quarantining out of an abundance of caution, the White House chose to dismiss Trump’s positive result and allow the president to attend an event honoring his Supreme Court nominee, Amy Coney Barrett—with her children in tow—along with several other GOP members—all without masks, indoors and zero social distancing. This event was later acknowledged as a super-spreader event.

Later that day, Trump again tested positive for COVID-19. Still, instead of letting the folks present at the Barrett event know of his results, the president flew to Middletown, Pennsylvania, for a rally—even walking on to Air Force One maskless and speaking to reporters, one of whom later got COVID-19.

The next day, Trump held a press conference outdoors on the subject of COVID-19 testing. He asked Admiral Giroir to talk about COVID testing during the event, where he joked, “Good luck. Hope you don’t test positive.”

Several staffers in the White House would test positive for the virus.

On Sept. 29, knowing that he had COVID-19, Trump flew to Ohio for his first debate against a then 77-year-old Biden.

According to MSNBC, Mark Meadows writes that even though he was fully aware that each candidate was required “to test negative for the virus within seventy-two hours of the start time ... Nothing was going to stop [Trump] from going out there.”

Meadows writes that Trump had been looking “physically unwell,” and was not tested before the debate.

“His face, for the most part at least, had regained its usual light bronze hue, and the gravel in his voice was gone. But the dark circles under his eyes had deepened. As we walked into the venue around five o’clock in the evening, I could tell that he was moving more slowly than usual. He walked like he was carrying a little extra weight on his back,” Meadows writes.

In the days that followed, Trump attended multiple rallies, without masks or social distancing.

Trump’s aide Hope Hicks was the first person in his inner circle to test positive for COVID-19. Trump then got a second positive test, but told Fox News’ Hannity that he’d recently gotten a test, but implied he didn’t know the results, saying, “we’ll see what happens.“ He then said that, if he’d gotten COVID, it would have been contracted from “soldiers and police” desperate to shake his hand.

“They want to hug me and they want to kiss me. And they do. And frankly, I’m not telling them to back up,” Trump told Hannity.

Trump finally publicly announced his COVID diagnosis on Oct. 2, allegedly just one hour after getting the test results. He was checked into Walter Reed later that day.

“Tonight, @FLOTUS and I tested positive for COVID-19,” Trump tweeted, adding that they would begin to quarantine immediately.

But even in the hours before announcing his diagnosis, Trump was diminishing the virus and the pandemic.

”I just want to say that the end of the pandemic is in sight,” he said in prerecorded remarks.

The full video is below:

Here’s Everything Trump Did After Testing Positive For Covidwww.youtube.com