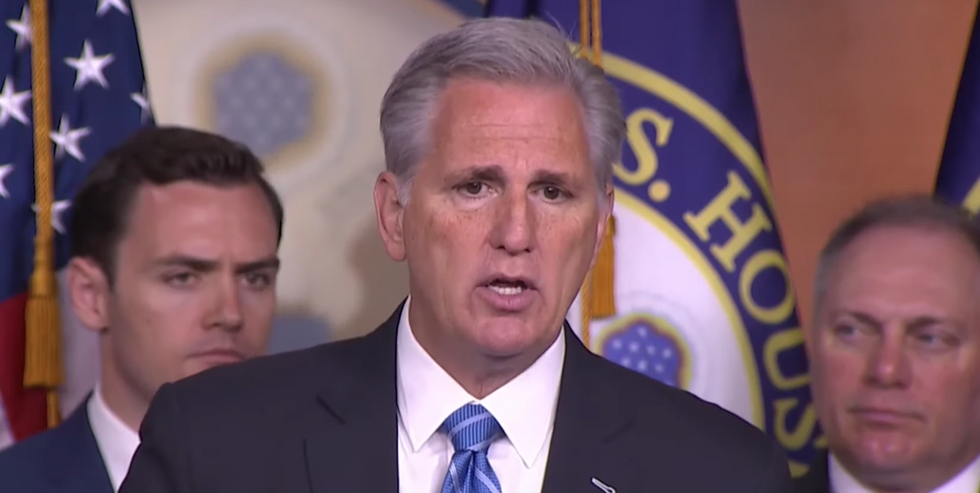 GOP Minority Leader Kevin McCarthy's dreams of one day becoming speaker of the House are going up in flames as the Republican caucus devolves into a raging inferno of internecine guerrilla warfare.

Specifically, House GOP radicals have turned caucus politics into an unsightly brawl more resembling the kicking, screaming, hair pulling, and spitting of a middle-school rivalry than the growing pains of major political party plotting its path to renewed relevance.

No one is more central to this uniquely embarrassing GOP drama than McCarthy, who has turned spinelessness into an ethic in his quest for power. McCarthy's moral deficit has left any members of the GOP conference who still possess a shred of integrity to condemn the actions of the extremists putting the lives of both their GOP colleagues and Democratic counterparts at risk.

It started last month with McCarthy allowing Rep. Marjorie Taylor Greene of Georgia to target as "traitors" the 13 House Republicans who voted for a bipartisan infrastructure bill supported by nearly two-thirds of the country. Egged on by Greene & Co., death threats ensued, but McCarthy turned the other cheek, because speakership.

But it was Republican Rep. Nancy Mace of South Carolina who would draw the next trashy moniker after she "100%" condemned Boebert's dangerous antics on CNN Tuesday. In response, Greene labeled Mace "the trash of the GOP Conference" in a Tuesday morning tweet.

Despite Mace telling CNN Tuesday that she hadn't come to Congress to name-call, the exchange devolved quickly.

“Marjorie Taylor Greene is a liar. And I’m not going to tolerate lies, racism or bigotry, whether you are Republican or Democrat,” Mace said during a Tuesday interview on Neil Cavuto’s Fox Business show. “She’s crazy. She’s insane. She’s bad for the party. And I’m not going to put up with it.”

This is exactly what happens in a caucus completely devoid of moral leadership. Indeed, McCarthy has become so useless, some of the GOP's saner caucus members are actually publicly begging him to at least act like a leader.

“I think when you’re in a position of leadership, you have to stand up. You have to deal with it,” said Rep. Tom Reed of New York, one of the 13 GOP House members who voted for the infrastructure bill. “I appreciate the fact that Kevin called our colleague directly to discuss the matter with her. But at some point in time, you also have to stand up and just call it out for what it is. This type of rhetoric cannot be condoned. It cannot be upheld.”

If McCarthy had more than two brain cells to rub together, he would realize this truth: His bid for the speakership is over, particularly if he continues to let the GOP radicals roll him like a limbless log day in and day out. Last week, Greene used Rep. Matt Gaetz’s podcast to note that McCarthy doesn't have “the full support" of the caucus to be speaker.

"There’s many of us that are very unhappy about the failure to hold Republicans accountable, while conservatives like me, Paul Gosar and many others just constantly take the abuse by the Democrats," Greene said.

It’s over, McCarthy. You appeased the radicals right into burning you at the stake.