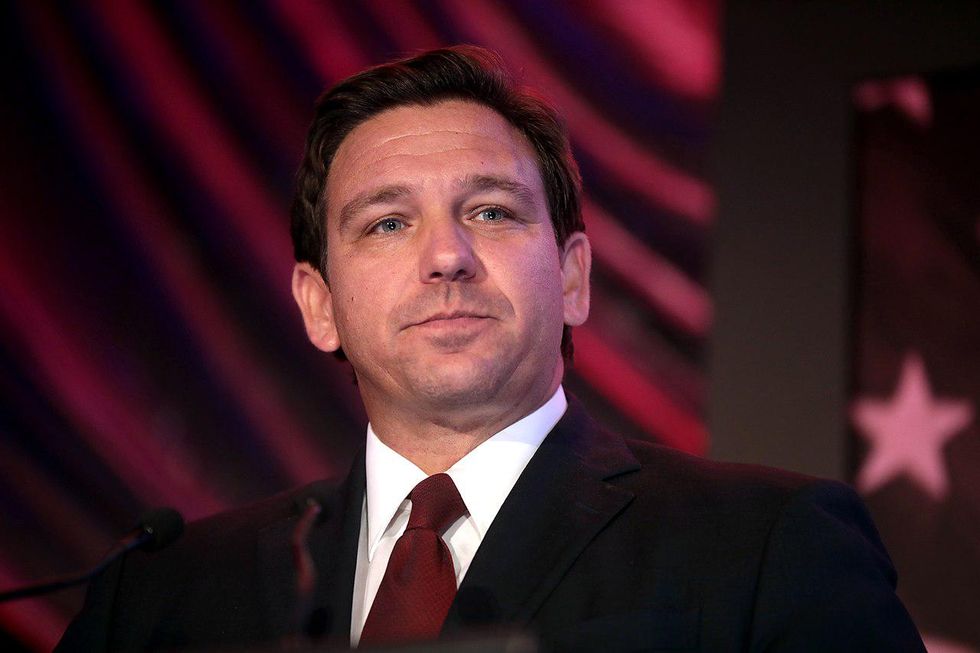 Critics are responding with alarm to news Florida GOP Governor Ron DeSantis is asking for millions of taxpayer funds to create his own militia force, separate from the existing National Guard.

CNN calls it "a World War II-era civilian military force that he, not the Pentagon, would control." And while the law allows for the move, it was created "as a temporary force to fill the void left behind" when the state's National Guard was deployed overseas, and "disbanded after the war ended."

But the highly-controversial Florida Republican, seen as one of the top 2024 GOP presidential candidates, is also making clear his motives are a further escalation in his war of words against the Biden administration.

"DeSantis also said this unit, called the Florida State Guard, would be 'not encumbered by the federal government.' He said this force would give him 'the flexibility and the ability needed to respond to events in our state in the most effective way possible.'"

For some reason, Ron Desantis now feels the need to create a state militia under his control. pic.twitter.com/q4EJUEGG4i
— Ron Filipkowski (@RonFilipkowski) December 3, 2021

It's also being seen as one more potential attack on science during the coronavirus pandemic era. All National Guard members must be vaccinated. DeSantis opposes all vaccine and mask mandates and has invited unvaccinated, fired police officers from others states to move to Florida – and offering them a $5000 payment.

No Governor should have his own handpicked secret police. https://t.co/BWEPhM5rHa
— Charlie Crist (@CharlieCrist) December 2, 2021

Perhaps one of the strongest warnings comes from SiriusXM Progress host Dean Obeidallah, who calls it "the beginning of a 'Red Army' as the GOP prepares for war."

DeSantis also said this unit would be "not encumbered by the federal government." In other words it would be Ron DeSantis personal militia. You know like political leaders in Iraq and Syria have. #TrumpsRedArmy https://t.co/rmZ93fa7mr
— (((DeanObeidallah))) (@DeanObeidallah) December 3, 2021

"The same Republicans who claim Jan 6 was not a terrorist attack but just a 'tourist visit' now tell us not to be concerned with Ron DeSantis forming a personal militia that he says will 'not encumbered by the federal government,'" Obeidallah adds. "This is a Red Army!!!"

Attorney and DeSantis critic Daniel Uhlfelder noted the governor's "classic authoritarian move" on bringing his son to the announcement.

In a classic authoritarian move Ron DeSantis brought his young son to brag about announcement of his reinstatement of long defunct Florida state guard. The Florida state guard would be under DeSantis’s sole power without any interference. ⁦@RemoveRon⁩ pic.twitter.com/tr6HyDJmZL
— Daniel Uhlfelder (@DWUhlfelderLaw) December 3, 2021

"More setting up for 2024 coup!" tweeted Amy Siskind, The New Agenda founder and author of The Weekly List.