The exultation on right-wing social media following Kyle Rittenhouse's acquittal has been sickeningly predictable: Mainstream conservatives loudly valorize Rittenhouse as a "hero," while more extremist voices, applying the same logic, demand that more Americans follow his footsteps—urging the likeminded to take to the street now to begin using guns to "be like Kyle." They have even appropriated his name for their future plans, voiced in numerous celebratory threads: Any leftist protester shot by a right-wing "patriot" henceforth will have been "Rittenhoused."

As we forecasted, the acquittal is now a beacon-like green light granting permission to violent right-wing extremists to openly wage the kind of "civil war" against "the left"—which ranges from liberal Democrats like Joe Biden to the "antifa" bogeyman they have concocted—that they have been fantasizing about for the past decade. In the words of Charlie Kirk's interlocutor, it's the signal that now they "get to use the guns."

The bloodlust has been palpable. Online trolls celebrated that "it's Open Season on pedo-commies" and boasted that the verdict means "there's nothing you can do about it." A neo-Nazi channel on Twitter urged readers to "let this win fuel your rage." A fan of pseudo-journalist Andy Ngo commented in a retweet: "Every one of these anarchist criminal thugs should be shot in the street like the worthless dogs they are."

Far-right maven Ann Coulter posted a meme showing a gantlet of comic-book superheroes bowing to Rittenhouse. On Facebook, Ben Shapiro framed any future violence as being left-wing: "The Left accepting the verdict in a peaceable manner remains the sizable elephant in the room."

This much is true: Kyle Rittenhouse is the hero we've been waiting for throughout the turbulent summer of 2020, where a Black Lives Matter/Antifa/Bolshevik revolution has our country on the brink of total chaos. 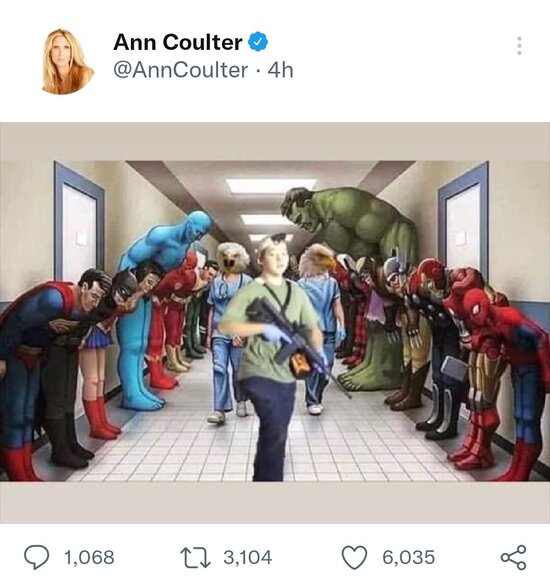 Matt Walsh of the Daily Wire blamed the media for there even having been a trial:

The verdict is right and just but Kyle Rittenhouse never should have been on trial at all. Now the media will go to work, like the demons they are, to ensure that Kenosha burns because they did not get their blood sacrifice.

I hope Rittenhouse bankrupts all of you dirtbags in media who smeared him as a white supremacist. I hope he ruins your life. I want you to suffer. It's what you deserve. It's justice.

Idaho legislator Tammy Nichols, a Republican, posted a meme featuring the Gadsden-flag "Don't Tread On Me" design, but with a graphic of Rittenhouse firing from a seated position as he did in Kenosha.

The Gun Owners of America (GOA)—a gun-rights extremist group headed by far-right militia figure Larry Pratt—joined in the celebration by announcing it was giving Rittenhouse a new gun.

Other "Patriot" Movement extremists saw the verdict as vindication for vigilantism and militia organizing. The "Washougal Moms," a militia-friendly group from eastern Washington state, opined:

Today the jury and legal system has reaffirmed our rights as citizens. The second amendment in all aspects, to form a well regulated militia, the right to bear arms in self defense, and against enemies both foreign and domestic!

Kurt Schlichter, the right-wing troll with over 380,000 followers, taunted MSNBC's Mehdi Hasan, who had expressed concern about the double racial standard that the verdict reflects, on Twitter.

Your pain delights me. Kyle Rittenhouse killed two leftist catspaws and bisected the bicep of another and there's nothing you can do about it.

A white-nationalist Twitter account called "Based Teutonic" celebrated the verdict by posting a fantasy that Rittenhouse would now embark on an action-hero-like mission—with the help of Judge Bruce Schroeder, who oversaw the trial in markedly biased fashion.

About to exit court room
Judge yells from behind:
Rittenhouse turns around
You forgot this
Tosses him his AR15
Credits roll, Eye of the Tiger plays

"Based Teutonic" wasn't alone in celebrating Schroeder's role in the verdict. On Telegram, a commenter in a Proud Boys channel observed:

Kyle's case shows how important is to have your guys in power on a local level. One vaguely conservative boomer judge made all of the difference in a monumental trial.

Other Proud Boys were more focused on their long-anticipated civil war. "There's still a chance for this country," wrote one. Another wrote: "The left wont stop until their bodies get stacked up like cord wood."

The Institute for Research and Education on Human Rights monitored a number of far-right chat forums (particularly Telegram) following the verdict, and found an outpouring of extremist bile, much of it anticipating the ability to inflict lethal violence on "leftists," as well as Black "parasites" and, of course, Jewish people. A user called The Western Chauvinist commented: "The parasites are planning multiple 'protests' across the United States."

One user calling himself "Proud Boy To Fascist Pipeline" replied to one of these comments mocking Black leaders protesting the verdict as "parasites": "Your 17 year olds are already armed and terrorizing our neighborhoods, n----er."

Fittingly, Charlie Kirk fans—following the example of his Idaho audience member—were focused on the violence: "Arm up and tell them f**cking bring it!" one replied to predictions of leftist protests after the verdict. "Shoot these phukers," commented another.

Nick Fuentes' "Groypers" were also unbridled in their anticipation of gunning down their opponents. "The most American thing you can do is Killing Commies," opined one on the white-nationalist forum Gab.

Another Gab user exulted with a meme showing Joaquin Phoenix as The Joker, dancing: "When you find out it's officially Open Season on pedo-commies." Mocking "wannabe street thugs upset with the verdict," another Gab user replied, "you're gonna get Rittenhouse'd. Bitch." 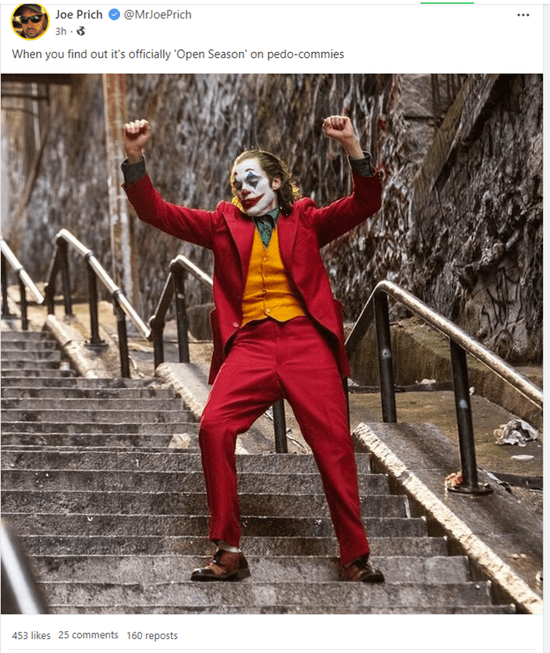 "Getting Rittenhoused" became a popular way of threatening leftists. After Ngo posted a handful of tweets from leftists angry about the verdict, hundreds of his fans piled on, making threats of violence against them. "Someone will Rittenhouse them too," one responded. Another replied: "I came here to say that!"

Antisemitism also was a common theme. Right-wing troll Keith Woods, who has 23,500 followers on Twitter, declared after the verdict: "Huge L for the Jews." His followers piled on; one responded with a GIF meme of Gollum and the text, "Curse you goyim." Another replied, "hopefully they take an L in Charlottsville trial too. WHITE BOY WINTER!"

White nationalist Eric Striker was more explicitly antisemitic, as well as strategic, in his commentary:

Beating the Jews to the narrative as incidents unfold is more important than anything that happens in court.
Once you frame a story with the facts (and the facts have to be 100% accurate) and disseminate it with an effective propaganda network, Jews will struggle to challenge it once it's cemented.

Notorious white nationalist and antisemite Mike "Enoch" Peinovich put out a statement through his National Justice Party: "This victory for Kyle Rittenhouse over the cosmopolitan elite forces that plague the nation isn't only a victory for the young man himself, it's a victory for justice and for all White people who take a stand," Peinovich said.

On Telegram, a white nationalist commented: "The victory of Kyle Rittenhouse over the jewish forces that plague the nation isn't just a victory for the man himself, it's a victory for justice, and for the masses of disenfranchised White people which populate the globe.

The neo-Nazi group White Lives Matter had this advice for its white-supremacist followers:

Don't let this one victory lull you back to sleep. That's what they want. They know small "victories" can placate the angry masses more than anything else. Instead let this win fuel your rage. Never forget the simple fact that this clear-cut self-defense should never have gone to trial in the first place. Muslim, Hispanic, and African invaders have raped millions of our women, WHITE women. Their time of terrorizing our People with 0 consequences is coming to an end. The Rittenhouse verdict is a single tick in the scoreboard on our side. Our enemy doesn't have a scoreboard big enough for their victories. Fight harder, stronger, fiercer, and with the same remorse they have shown us. None. Get going, White man.

"This might be interpreted across the far right as a type of permission slip to do this kind of thing or to seek out altercations in this way, believing that there is a potential that they won't face serious consequences for it," Jared Holt of the Digital Forensic Research Lab at the Atlantic Council told NPR. "I worry that that might end up being interpreted by some people as a proof of concept of this idea that you can actually go out and seek a 'self-defense situation,' and you'll be cheered as a hero for it."