MANASSAS, Virginia — A routine campaign stop for Virginia gubernatorial candidate Glenn Youngkin turned chaotic on Saturday night after the candidate's team was forced to boot a local Republican leader and apparent white nationalist from the event, causing a scene that a spokesperson called "antithetical" to the Republican hopeful's message.

The incident happened just before Youngkin was slated to give a stump speech to a crowd of "Latinos for Youngkin" at a local restaurant, when campaign officials approached a man, named Fredy Burgos, who was wearing both a red pro-Trump hat emblazoned with "Build the Wall" and a pin promoting white nationalist and Unite the Right rally attendee Nicholas Fuentes.

Burgos is a longtime far-right activist and former local Republican party official who made waves during the Trump years with a series of bombastic statements that earned him plenty of enemies in local conservative circles. The Washington Post, reporting on a 2018 drive to oust him from his post on the Fairfax County Republican Party committee, wrote that he was a "verbal bomb-thrower whose attacks against Muslims, immigrants and others have turned off moderates."

He even appeared alongside several of Fuentes' white nationalist followers — known online as Groypers — at a Loudoun County School Board meeting recently, which has become a local flashpoint in the nationwide right-wing campaign to ban anti-racist lessons in public schools.

As Saturday's Youngkin event was getting underway, Burgos, who sported a thick mustache and vintage suit vest for the occasion, made a short-lived walk around the inside of the venue, only to be forced out after Salon inquired about his pin and associations.

Notably, Burgos said he only became a Youngkin supporter recently, after Virginia state Senator-turned-"toxic [Youngkin] surrogate" Amanda Chase lost her bid to Youngkin. Prior to the loss, she had taken to calling herself "Trump in heels." Despite Burgos being booted from the event Saturday, he told Salon he remains a steadfast supporter of the candidate and that he hopes to appear at future rallies.

"I'm a supporter of the ticket," Burgos told Salon after being removed from the "Latinos for Youngkin" event. "They are concerned about the [Build the Wall] hat. I think that they have a problem thinking that other people may have a problem with the hat." 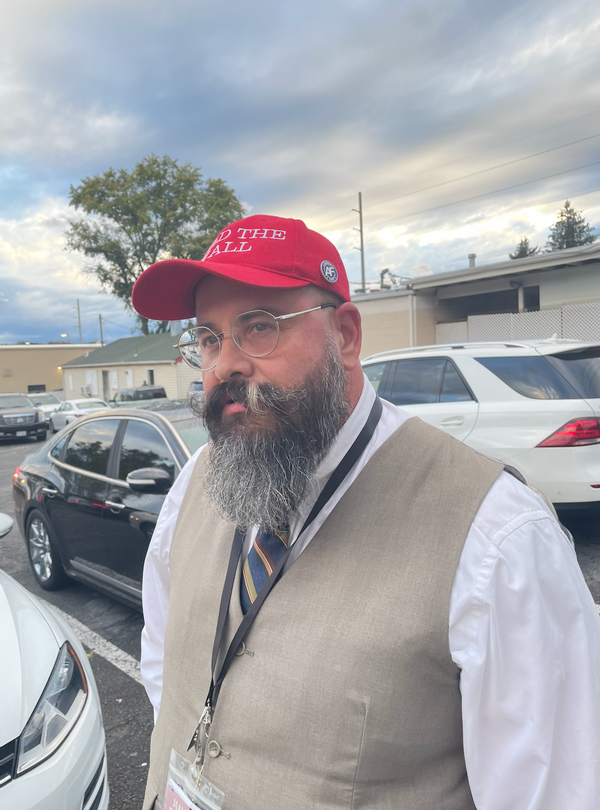 "I believe that we need to put the interest of the American people and America First on every issue."

In a subsequent statement to Salon, a Youngkin campaign spokesperson said Burgos, who told Salon he has attended numerous other campaign events without incident, espoused beliefs "antithetical" to the candidate's message of unity.

"At today's Latinos for Youngkin event, a Salon reporter informed a staffer of an attendee's pin that associated the attendee with [an] element of the white nationalist movement. The white nationalist movement and those associated with it are entirely antithetical to tonight's event — to celebrate the end of Hispanic Heritage Month and the Latinos for Youngkin efforts — and Glenn's message to unite ALL Virginians, so the attendee was asked to leave," Youngkin spokeswoman Macaulay Porter told Salon in a statement. "There will never be room for white nationalism or any form of hatred or bigotry on this campaign."

It's not the first run-in with right-wing extremism for the Youngkin campaign, either: the candidate himself has appeared on former Trump official Sebastian Gorka's radio show. Notably, Gorka found himself in hot water after wearing the pin of a Nazi-linked group to Trump's inaugural ball.

Last week Youngkin also found himself the recipient of high praise from the former president himself during an event in which attendees pledged allegiance to an American flag that supposedly flew over a rally that preceded the Jan. 6 insurrection — a bizarre show of support for the rioters who attempted to stop the certification of President Joe Biden's electoral victory over Trump.

Youngkin later tried to distance himself from the gathering, and the former commander-in-chief, by calling the incident "weird."

It's a delicate needle Youngkin is attempting to thread on the campaign trail — appealing to hardcore Trump supporters by embracing election conspiracies and anti-vaccine sentiments, while simultaneously claiming to hold moderate beliefs.

"Here is what Glenn Youngkin has done, which is brilliant. He doesn't go around talking about November 3rd, but here's what he's done," right-wing radio host John Fredricks, the organizer of last week's flag incident, said during a Thursday morning appearance on Bannon's "War Room" podcast.

"Glenn Youngkin has put together the greatest voting integrity infrastructure in the history of Virgina. He's got the RNC behind it; they have lawyers, they have a hotline, they have this whole thing."

"Obviously, Glenn Younkin believes that the election in 2020 got stolen," Fredricks added.

It's these beliefs that Burgos cited as the reason he plans to continue supporting Youngkin despite being booted from the campaign event Saturday. He even said he planned on attending another Youngkin event later that evening in Northern Virginia.

The controversial 2013 Republican candidate for Virginia House of Delegates did say he might have to leave his hat at home from now on.