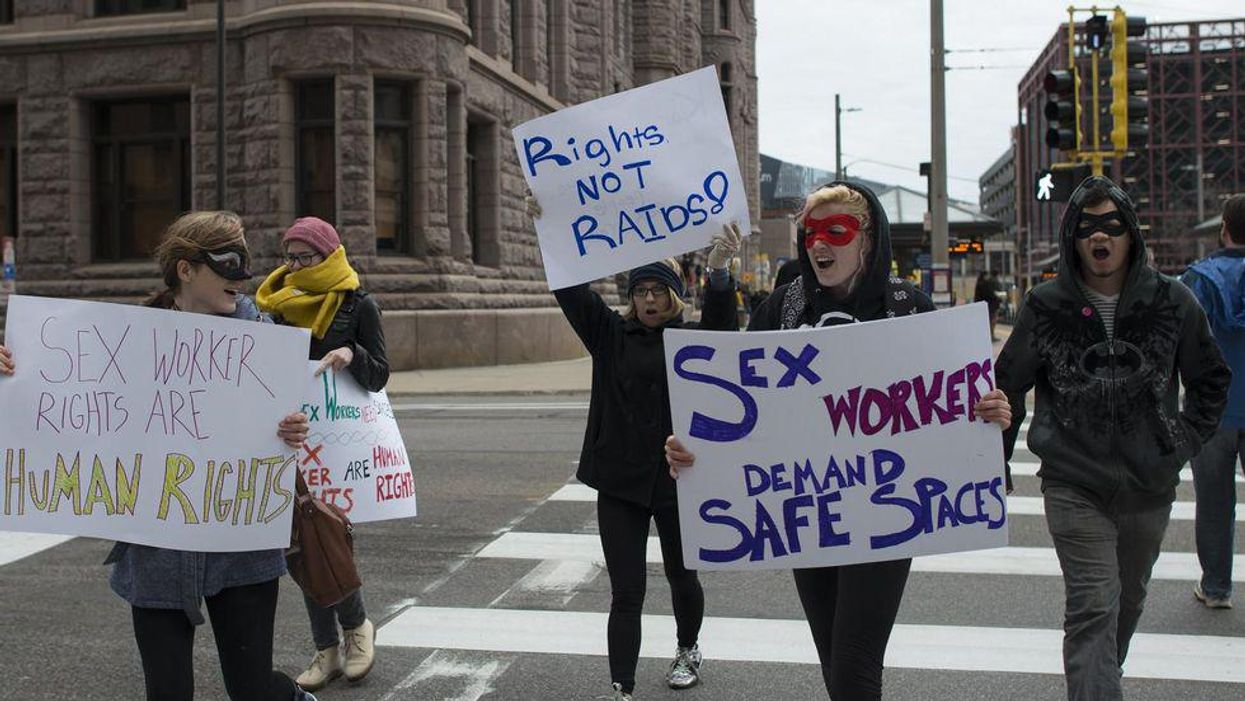 Minneapolis, Minnesota - October 25, 2016 - Sex Workers and their supporters gathered in Minneapolis to protest the recent raid and arrests at Backpage. Protesters say sites like Backpage.com allow them to work independently to screen clients and shutting them down exposes them to more risk. Credit: Fibonacci Blue
Rod Graham
September 01, 2021

Labor Day is "an annual celebration of the social and economic achievements of American workers." There is one industry that is far from celebrated. It provides income to many people who would otherwise have difficulty finding meaningful work. It gives leisure and emotional connections to many. I am talking about the sex work industry and prostitution specifically.

Good information on the economics of sex work is hard to come by. However, according to a highly cited study by the Urban Institute, the industry is quite lucrative. Among eight major sex work markets studied in 2007, it estimated that sex work produced $290 million in Atlanta on the high end and $40 million in Denver on the low end.

Unfortunately, those who stand to gain the most from this industry — women, racial and sexual minorities, and the poor — must work under the threat of police intimidation, abuse and exploitation. Sex worker rights groups such as the Network of Sex Work Projects (NSWP) have been attempting to engage the broader public on this issue for quite some time. A big step internationally came in 2015 when Amnesty International declared sex worker rights are human rights.

But America has been relatively silent. When progressives think of social justice, they need to think of sex worker rights and the end to criminalizing prostitution. There are many ways to reach this goal, but the two best alternatives, in my view, are full decriminalization, in which the government has no say in the sale of sex, and legalization and regulation, in which prostitution is legally practiced and licensed.

I do not agree. I believe legalization with licensure is the better option. However, I'd like to describe some of the reasons sex workers and their advocate argue for full decriminalization.

One reason sex workers argue for decriminalization is because government intervention inevitably brings an antagonistic police force into contact with vulnerable prostitutes. Police harass, intimidate and even rape sex workers. Because prostitution is illegal, sex workers have no recourse.

I believe that the only group that trusts police less than prostitutes is young urban Black and brown men. Just like young males of color, this mistrust comes from decades of mistreatment by police.

A second reason is licenses are hard to obtain for poor or marginalized people. This is the same pool from which a disproportionate number of prostitutes are drawn. Licensing would make it harder for them to work in the industry, further marginalizing them. There is no doubt about this. Completing the steps for licensure — likely a combination of fees, classes and tests — would make it harder for those with fewer resources to compete for work. For some, it would be impossible.

A third reason is grounded in personal freedom. Sex workers argue they should have the right to do with their bodies whatever they please. Government should not, the logic goes, be legislating how a person uses their body or who a person can have sex with.

The concern about police mistreatment is genuine. But licensure can move prostitutes out of public spaces and into public-facing businesses or their own homes. It separates them from contexts in which overly aggressive police thrive. If there is a need to call the police, they are coming into a place with licensed professionals and not to spaces where they are accustomed to other illegal activities, such as drug or gang activity. Admittedly, this does not prevent police from mistreating anyone, but a shift from the street to the salon, from sidewalk sales to small business sales, would make a big difference.

The concern for marginalized people being priced out of the profession as a result of the cost of licensure is real. But I believe, in the long run, an occupation will always be stigmatized if the idea is that it is "for the marginalized." We are much better off as a society finding routes for people from disadvantaged backgrounds to attain licensure.

It may also counteract a rapidly growing chasm between the haves and the have-nots in terms of esteem within sex work. Elizabeth Bernstein, professor of women's studies and sociology at Barnard College, published an article in the journal Sexualities entitled "Sex Work for the Middle Classes." In that article, Bernstein explores the meanings middle-class sex workers — in this case, escorts — have about their profession. Bernstein writes that a hollowing out of middle-class jobs, rising costs of living in urban areas, and young women delaying or questioning marriage make escorting a viable option. Her article was published in 2007, and I do not believe that these trends have decreased. This "white girl magic" in the sex work industry is already evidence of a two-tiered sex work economy with higher-paid escorts selling sex in relative autonomy and freedom, while lower-paid prostitutes must risk violence from clients and police.

I fear that if sex work is decriminalized and there is no way of signaling the quality of service, patrons will choose "white girl magic." One of the functions of licensure is assurances to patrons that the service is of a certain quality. As such, it may allow prostitutes who are marginalized, not from middle-class backgrounds and not white to demonstrate services are safe and meet a certain standard of quality.

The third concern for prostitutes is controlling their own bodies, which I do not entirely grasp. The purpose of licensure is not to regulate bodies. It's regularing the act of buying and selling sex, i.e., the market. I am in favor of regulating markets. Moreover, and I think, more importantly, all occupations require someone doing something with their body to gain money. Why should prostitution be different?

I don't think prostitutes want to argue that their job is "special," as that plays into the conservative argument that sex is such a unique activity that it cannot and should not be sold. A more compelling argument would be that prostitution is just like any other occupation.

Sex workers rights and social justice
Whether you agree with the idea of full decriminalization or legalization with licensure or some other path that allows sex workers to practice their trade free, it is well overdue that progressives add sex worker rights to their list of "to-dos." It is a matter of social justice.

Sex workers come from the historically marginalized and disadvantaged groups we care about — the poor, women, sexual minorities and racial minorities. In this way, sex worker rights and social justice are one and the same.