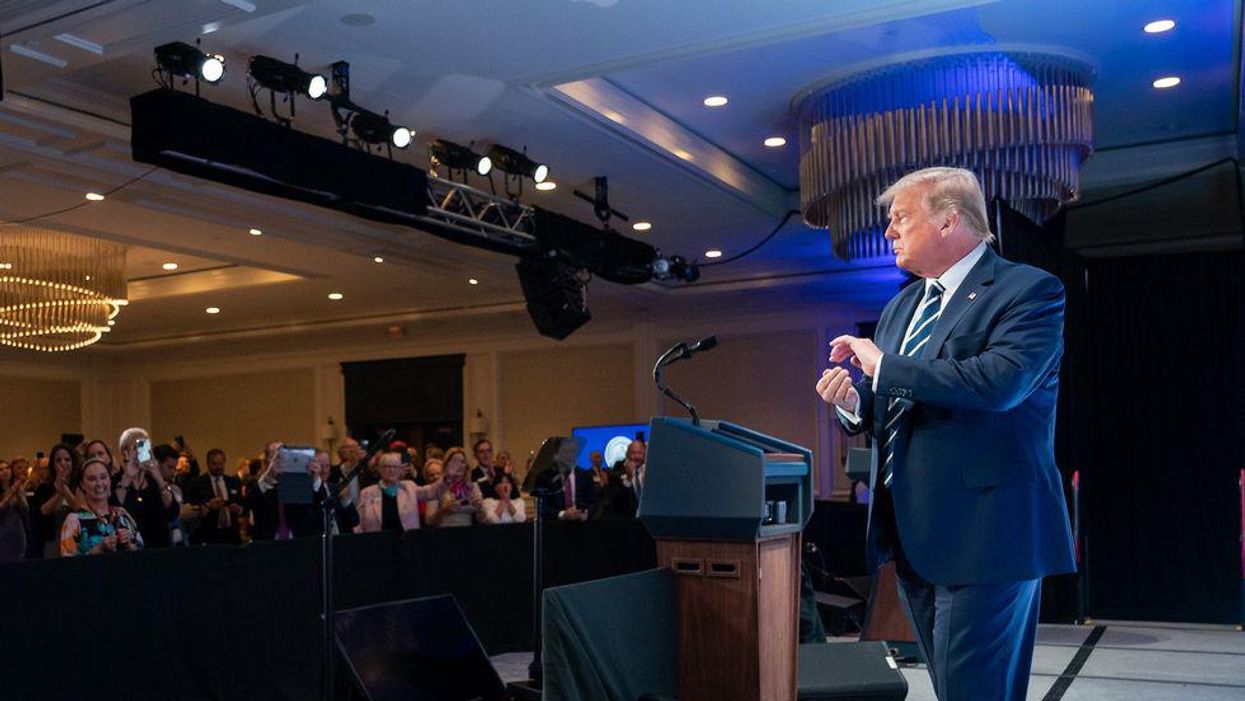 A new ProPublica investigation highlights the nationwide push by pro-Trump Republican conspiracy theorists to invade, overwhelm, and annex the lowest tiers of their local Republican parties. Their stated goal is to alter how elections are run—and how the votes are counted. ProPublica cites fascist gadfly Steve Bannon as the movement's lead and inspiration, but that is likely giving him too much credit. If Steve Bannon had disappeared under his three shirt collars immediately after being fired by Trump, never to be heard from again, the now conspiracy-dependent Republican and Fox News base would still act exactly as they have.

ProPublica's details of how Republican conspiracy theorists are aggressively seeking to topple any local party figures who do not toe election hoax lines can be better read as a narrative of how fascism, in all its anti-law and pro-violence details, is now bubbling up through the party in a possibly unstoppable fashion.

That should not be surprising. Anyone claiming to be surprised by it is a rube. It was actively encouraged during years of Fox News conspiracy-peddling that reduced all policy debates to battles between the Good—meaning whichever Republicans were in office that day—against the Bad, i.e., an entire Democratic apparatus constructed to oppress white Americans with waves of nonwhite immigrants, institute authoritarian rule by crafting rules that would not let mass murderers so easily acquire guns, oppress conservatism by prohibiting good and proper discrimination, and so forth.

Democrats were simply the Enemy, in every Fox News narrative on any subject. The devices of demonization worked wonders on the base, and were eventually mirrored by nearly every Republican elected official as they themselves tried to substitute arguments about policy with new declarations claiming everyone from schoolteachers to scientists to wealthy Jews were conspiring against them. It is small wonder that new conspiracy hubs soon littered the bottom rungs of the conservative base, or that those bottom rungs would soon grow incensed with any members of the movement not willing to ascribe to each one of the paranoid fantasies they crafted for themselves.

Here are the details of what is happening, as explained in solid detail by ProPublica:

It is a fascist push from the "populist" base up through Republican chain of command. Trump, during his tenure, oversaw a push to purge the Republican Party of those deemed insufficiently loyal to party interests that worked from the Republican National Committee downward. The current push is working from local precincts upwards, ferreting out the "insufficiently loyal" by imposing a single test. Either local party leaders support fraudulent claims that the election was "stolen" from the buffoonish Donald Trump, or they are being purged and replaced with conspiracy crackpots willing to bellow those claims to whichever cameras may be present.

It's the demand that the party adhere to hoaxes over truth that makes it fascist. It's the continued threats of violence premised on seeking revenge or justice against the supposed perpetrators of the conspiracies against them. It's the direct targeting of party officials who speak out to assert, correctly, that the hoaxers' claims are untrue that makes this a fascist movement.

The Republican Party is being reconstructed at all levels around a core of conspiracy theories considered to be more important than the truth—while demonizing and expelling any remaining party officials who disagree. The party's local operations are rebasing themselves around the conceit that elections they do not win have been "rigged" against them, with new vows to nullify future elections based on those hoaxes.

It's a party based on the promotion of false propaganda and the quashing of truth so as to assume "justified" authoritarian powers, one with a militant paramilitary wing willing to wander city streets to knock heads or, indeed, invade government buildings in an effort to erase elections that have gone against them.

Fascism has a long history in America, a history with its own slogans, symbols, and hats. The focus on "reforming" elections so that fewer Americans are allowed to vote, coupled with new laws giving party loyalists more explicit powers to probe and nullify local election results party leaders object to, is an end-game move. The Republican Party's now-radicalized base doesn't intend to let future elections go against them. Either by threatening violence or disputing the validity of elections themselves, they are making their belief that Republican Party power trumps the needs of democracy itself very clear. Believe them.