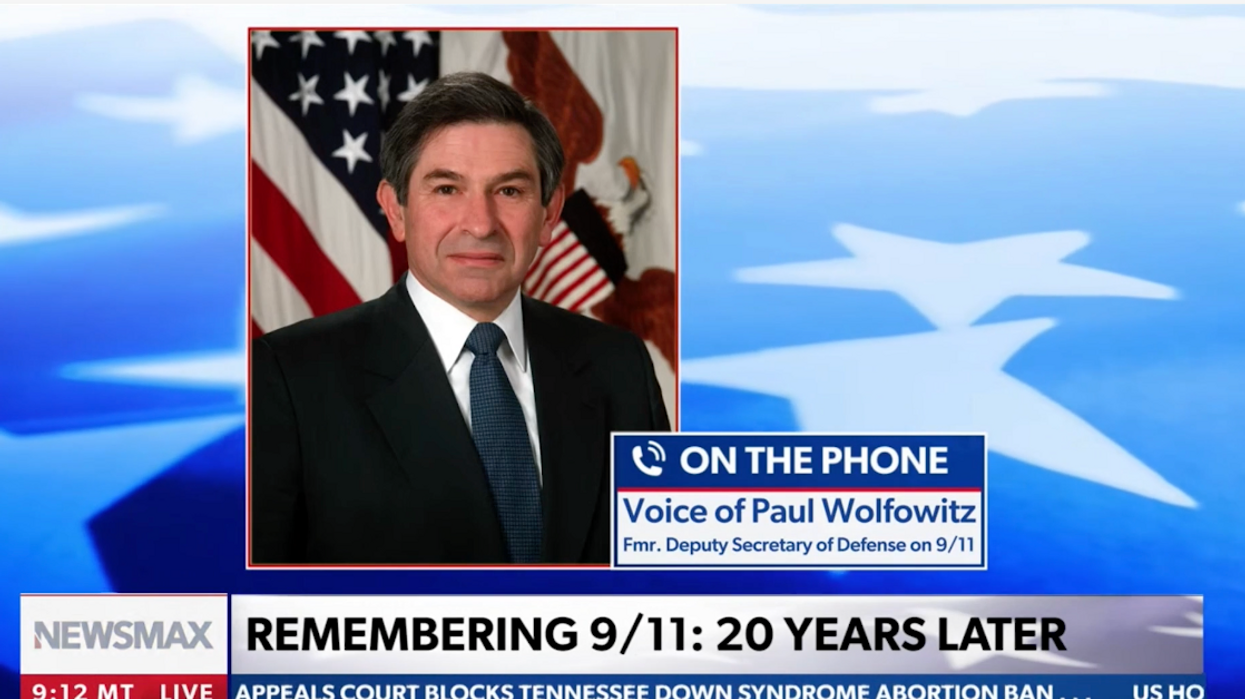 A group of pranksters tricked Newsmax into interviewing a fake Paul Wolfowitz Saturday for the 20th anniversary of the 9/11 attacks — the second time the exact same ruse has worked on the right-wing cable network.

Host Tom Basile first fell for the ploy roughly three weeks ago when a group of professional pranksters called the "Yes Men" organized an interview under the guise that they were colleagues of Wolfowitz' at the American Enterprise Institute, where he is a senior fellow, according to a report in Mediaite. Wolfowitz was also the Deputy Secretary of Defense under George W. Bush, where he served as a primary architect of the war in Afghanistan.

The Yes Men describe themselves as "laughtivists" who "destroy brands, create public illusions, work with communities, disrupt events, and impersonate nefarious entities in order to bring attention to critical issues, cheerlead activists, and, sometimes, galvanize communities into more action," according to their website.

One of the members, Andy Bichlbaum, described the incident in a blog post:

Andy's plan was to switch "Wolfowitz" with a "colleague" from the American Enterprise Institute at the last minute — and that would be Andy under an assumed name, wearing big silly glasses like all of the guests on Basile's show seem to do.

But when, two minutes before the 12:04pm EST Saturday slot, Andy logged on and told producers that Wolfowitz was having internet trouble and wanted him to do it instead, the producers refused, and suggested just patching Wolfowitz through on the phone — which is how this became the very first time the Yes Men impersonated an actual person, rather than simply inventing one.

The interview promptly went off the rails, with Bichlbaum describing the war in Afghanistan as a colossal waste of money — a sentiment very different, needless to say, from the views held by the real Wolfowitz.

"It's very clear $2 trillion could have gone to things that Americans could now be proud of, instead of a 20-year unwinnable war," he said, according to a transcript shared by the Yes Men. "The next time we have two trillion dollars lying around, let's spend it on something useful like health care or education."

["Americans] can be proud of a war, even if it's unwinnable, even if it lasts 20 years, even if it's been a failure from day one. That's what we've lost and that is truly tragic, Tom."

The interview was particularly absurd for the fact that Bichlbaum never even attempted to impersonate Wolfowitz' voice — but Basile, who claimed during the interview to know Wolfowitz personally, never even noticed.

Which is why, on Sept. 11, Newsmax producers again reached out to the group to set up another interview with Wolfowitz. Only this time, the Yes Men said they were "determined to stop [Newsmax] from calling again."

Bichlbaum quickly began a rant about "new master terrorists" that "make those old hijackers look like rank amateurs," before calling out Newsmax specifically:

"As a friend of this station I've got to tell you, Newsmax is a much bigger threat to America than the hijackers of 9/11," he added.

The network cut the interview short after these comments, but the panelists still seemed to think they were speaking with the real Wolfowitz.

"He was at the Pentagon that day and you would think that he wouldn't choose this moment to be, frankly, hateful and intolerant," Basile said after cutting off the prankster's audio.

On Sunday, Newsmax seemed to acknowledge that it had been duped in a statement to The Daily Beast.

"While we were covering special 9/11 remembrances and honoring those who had lost their lives, including heroic police officers and firefighters, horribly there were others whose only goal is to lie, deceive, and destroy. They dishonored the memories of true heroes."

Watch the full video below via The Yes Men: