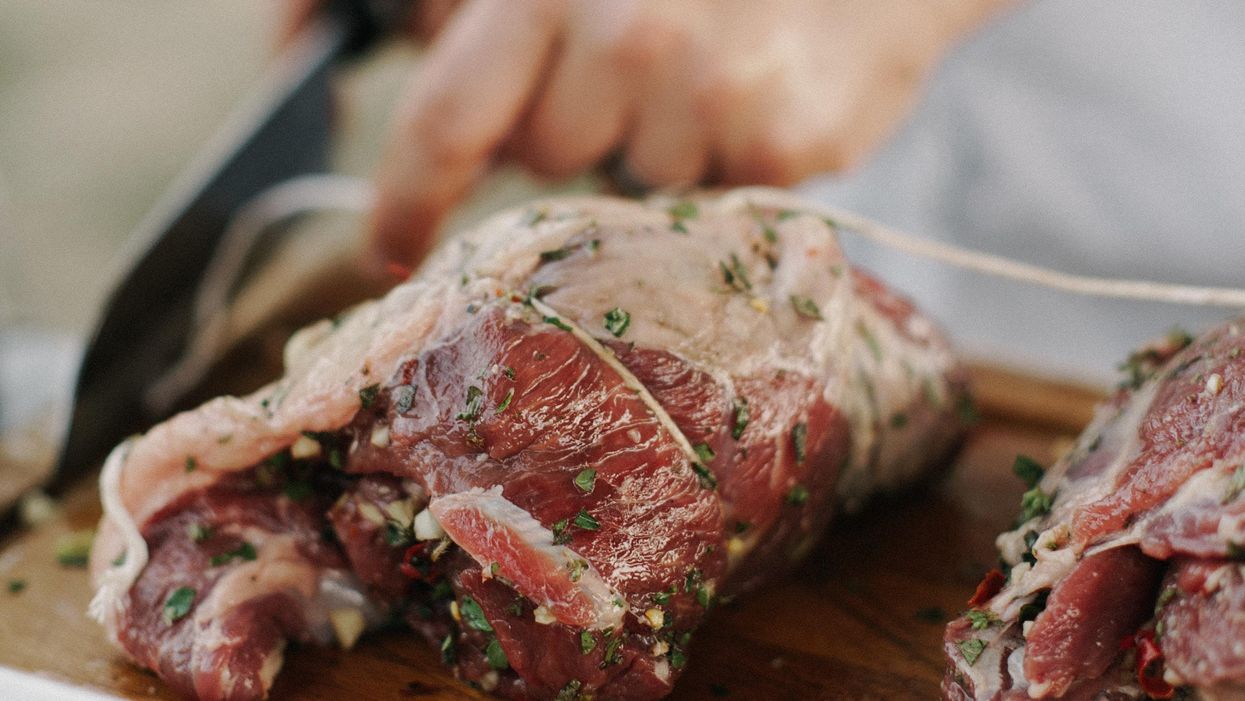 Amid a surge in COVID-19 cases, we look at the experiences of meatpacking workers during the pandemic and beyond. Dulce Castañeda, a founding member of Children of Smithfield, a Nebraska-based grassroots advocacy group led by the children and family members of meatpacking workers, says conditions in the meatpacking plants during the pandemic remained as usual. "It was a situation where they weren't receiving the protections that they needed," she tells Democracy Now!, adding that workers often don't have the time or resources to advocate for themselves. Castañeda and her family are profiled in a new book by journalist Eyal Press titled "Dirty Work: Essential Jobs and the Hidden Toll of Inequality in America."

Monday is Labor Day. We're spending today's show with New Yorker writer Eyal Press and some of the people he profiles in his new book, Dirty Work: Essential Jobs and the Hidden Toll of Inequality in America. This Labor Day comes amidst a new surge of coronavirus cases. The virus has been deadly for so many so-called essential workers, who are often low-wage workers, immigrants and people of color. Meatpacking plants have been deadly COVID-19 hot spots. These workers and their families are profiled in a section of the book called "On the Kill Floors."

For more, we go to Crete, Nebraska, to speak with Dulce Castañeda, founding member of Children of Smithfield, a Nebraska-based grassroots advocacy group led by the children and family members of meatpacking workers. Still with us, Eyal Press.

Dulce, welcome to Democracy Now! Can you update us on what has been the situation at meatpacking plants and how immigrant essential workers have been impacted by the pandemic? And talk about your own family.

DULCE CASTAÑEDA: Absolutely. Thank you, Amy, for having me this morning.

Yeah. So, to start out, I guess I'll say, in April of last year, of 2020, we were entering a crisis worldwide. And it was a situation in Crete, Nebraska, where we were beginning to see, you know, a lot of our public locations beginning to close down. Schools had shut down. Government buildings were beginning to close. And while all of this was happening, things at the Crete Smithfield plant sort of seemed to be remaining as usual. Nothing was really changing.

And so, my father, who's a meatpacking worker and works at the plant, I was hearing from him and from other community members sort of the working conditions that they were facing. They really weren't being provided any kind of COVID-19 protections. So, they were being given hairnets to wear on their faces instead of face masks. And instead of proper social distancing or sanitizing stations, what they were being given was, instead, chips or cookies at lunch to thank them for their work. And so, it was a situation where they weren't receiving the protections that they needed.

And so, you know, often these workers don't have the means to advocate or the time. And so, I, as my father's daughter, and many of my colleagues, who, like me, were worried about the health and safety of their parents, decided to form together and speak up and speak out about the conditions that they were facing. And so, that's how I got involved in this work.

AMY GOODMAN: So, talk about Nebraska. You're with Children of Smithfield, the meatpacking plant. In Nebraska, almost 7,000 COVID-19 cases were traced back to meatpacking plants, where, according to Migration Policy Institute, 11% of the workforce is made up of undocumented people. Can you talk about the conditions in the plant that your father, that so many people faced? I mean, during the Trump years, you had Republican governor after governor standing with Trump, saying they would not let the meatpacking plants close, even as we heard of the number of people sick and dying. Do you know what that number is?

DULCE CASTAÑEDA: Unfortunately, in Nebraska, our governor decided to stop allowing health departments to release that information, and so that information stopped being public in May of 2020, very early on. So, you know, at a time where we were seeing around — more than a hundred cases were already reported at the Crete Smithfield plant. And that number, after that, you know, there was a number that we can no longer trace back. And so, we had aggregate data at the state level from the Department of Health and Human Services, but there was nothing traceable back to certain locations or certain facilities. And so, you know, you would start to hear about people becoming sick or dying, from word of mouth. You know, all of a sudden this person was missing on the line, and you didn't know why. You could make assumptions. But people began to stop showing up for work for one reason or another.

AMY GOODMAN: How easily were you, were family members, were family, were the workers themselves able to get vaccines?

AMY GOODMAN: And just for people to understand, what's produced at Smithfield, where your dad works? And what message do you have for this country as we move into Labor Day?

DULCE CASTAÑEDA: Sure. It's a pork processing facility. My father has worked there for more than 25 years now. And he's proud of the work that he does. He has always enjoyed his work, and he's a very hard worker. But I would say, you know, these are the forgotten jobs, folks who — we forget that they are the backbone of our local economies and our national economy.

So, I would say, you know, if we really are thankful for the work that essential workers have done, especially in sustaining our society in such a moment of crisis, what better way to thank them than to start thinking critically about the access to different resources that they have or that they don't have, and how do we make sure that they can access them in the future?

AMY GOODMAN: And finally, Eyal Press, who put together this wonderful, enlightening, painful book, Dirty Work: Essential Jobs and the Hidden Toll of Inequality in America, what surprised you most in your research? You have 20 seconds.

EYAL PRESS: Well, I think that just the incredible dignity of the people I wrote about, including Dulce and Chris. It is a dark book, and it is a hard book to read. But I think it's so important, as we approach Labor Day, but also beyond it, to hear their voices, to know that this work is connected to all of us. We shape the conditions it takes place under. We shape the harm it causes. And so, we have to think about that and own it.

AMY GOODMAN: Eyal Press, author of Dirty Work: Essential Jobs and the Hidden Toll of Inequality in America. And Dulce Castañeda with Children of Smithfield, speaking to us from Nebraska.

That does it for our broadcast. Democracy Now! produced with Renée Feltz, Mike Burke, Deena Guzder, Messiah Rhodes, Nermeen Shaikh, María Taracena, Tami Woronoff, Charina Nadura, Sam Alcoff. Special thanks to Julie Crosby. I'm Amy Goodman. Thanks so much for joining us.