McConnell 'prays' for Manchin and Sinema to help him defeat Biden 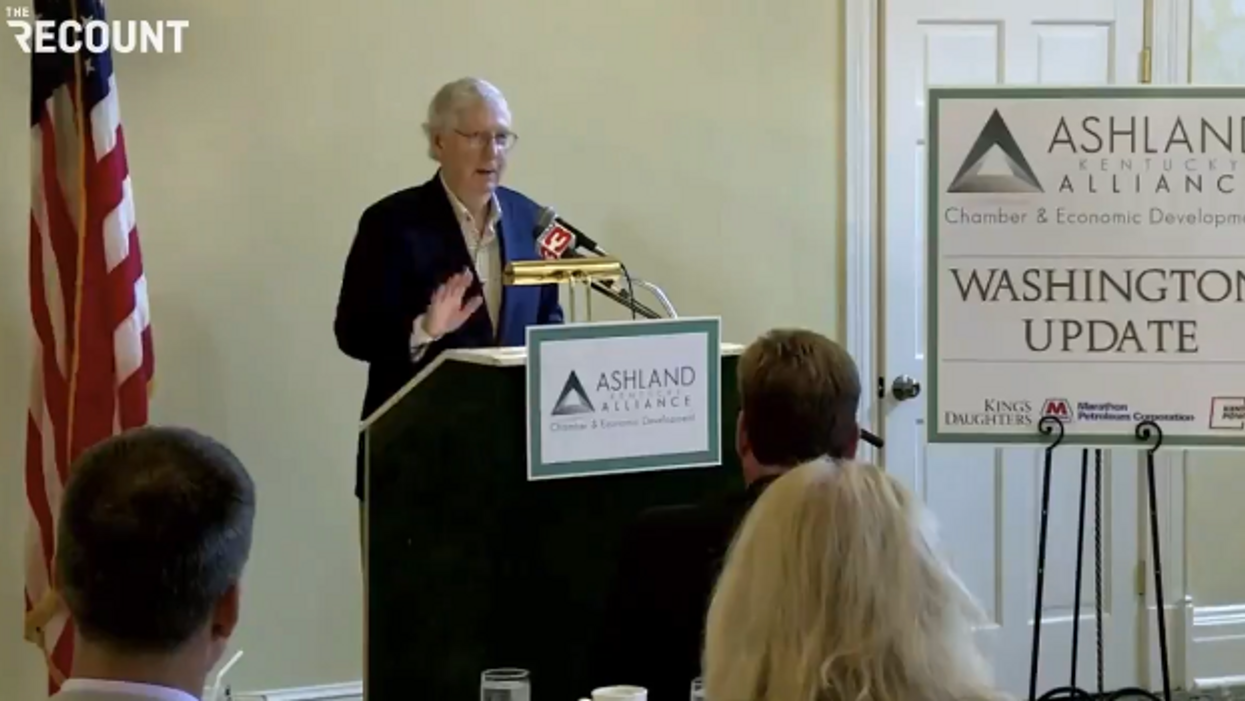 Maybe this is entirely coincidental: The day that news dropped of a "massive lobbying blitz" by corporate America "to kill key parts of Democrats' $3.5 trillion economic plan," Senate Minority Leader Mitch McConnell spoke about the bill, telling Democratic Sens. Kyrsten Sinema and Joe Manchin that he's counting on them to help sabotage it.

Mitch McConnell: “I’m praying for Joe Manchin and Kyrsten Sinema, the two Democratic senators that seem to have som… https://t.co/E2QaSx5bIf
— The Recount (@The Recount) 1630432961.0

In other words, he's reminding Sinema and Manchin which side their bread is buttered on, in the event that the "torrent of political groups representing some of the country's most influential corporations—including ExxonMobil, Pfizer, and the Walt Disney Company" and their planned lobbying onslaught reported by The Washington Post don't get the job done.

The Post lists pretty much ever single major industry behind the effort to kill Biden's economic agenda: "drug manufacturers, big banks, tech titans, major retailers and oil-and-gas giants." In other words, Manchin and Sinema's buddies, and the House Sabotage Squad's best friends. Well, them and Republicans.

The barrage that is about to come from the U.S. Chamber of Commerce and all those industries has to happen fast if they're going to influence the bill writers—it's being completed right now, with an intent to try to pass it within weeks. So they've got to hurry to get their attacks in, or they could be putting all their eggs into the Manchin/Sinema basket and betting that they'll intervene at the last minute.

The corporations have washed-up, has-been Democrats helping on this effort, aimed mostly at trying to preserve the Trump tax cuts, so you definitely know who the main targets are. "Any increase in the rate would position our country even further behind global competitors like China—and carry devastating consequences for American workers, who ultimately bear as much as 70 percent of the corporate income tax," said former Sen. Blanche Lincoln. She's now the "chief adviser" to the RATE Coalition, which includes Capital One, Disney, FedEx, Lowe's, and Lockheed Martin among its funders. They've got a "seven-figure digital advertising campaign to oppose Democrats' plans" in the works.

You might remember Blanche Lincoln as the ConservaDem who just kept tacking right—and right out of her Senate seat in 2010. She's not the only defeated Democrat getting in on the corporate cash-cow that is defeating popular policy for the sake of corporations' zero-tax bills. Former North Dakota Sen. Heidi Heitkamp is in on it, too, starting up a new dark money group called Save America's Family Enterprises (SAFE) to perpetuate the myth that estate taxes actually hurt middle-class family businesses and farms, and to stop capital gains from being taxed at death.

It might do well for Manchin and Sinema to look at the part where these two Democrats are ex senators. Or not, since they're probably making some pretty good bank. It's hard to imagine what else the two would be after, since it's certainly not the friendship of their current Democratic cohorts. Making nice with Republicans didn't do a whole lot for Lincoln or Heitkamp when it came to the voters.

And voters—even Republican ones—are pretty darned excited about what's in Biden's big human infrastructure bill. Data for Progress conducted a poll at the beginning of August finding strong majority support—66%—for a $3.5 trillion (it even included that figure ) plan including funding to improve long-term care for seniors, expand Medicare benefits, expand pre-K, modernize the electric grid, and extend the child tax credit expansion. A plurality of Republicans even support it, according to that poll, with 47% in support and 44% opposed.

A USA Today/Suffolk University poll released Aug. 25 finds 52% support. "It's a long time coming," said one of the participants, Republican John Plaskowsky, 55, a business manager from Suwannee, Georgia. He supports both the hard and human infrastructure bills, saying the latter is necessary because it can help many people more than "a better road or a better bridge," he said.

The provisions of Biden's Build Back Better plan—investments in children and families, workers, health care, education, and the environment—would sure help a lot more people than keeping those Trump tax cuts for the super rich. Now it's entirely possible that the Sabotage Squad, Manchin, and Sinema are looking beyond their current gigs and trying to figure out how to get in where the really big money is. It's hard to see what else they'd be aiming for.