What do Manchin and Sinema want to cut from Biden's plan? Dental care for grandma

At the behest of business interests, a Sabotage Squad of 10 House members tried to derail President Joe Biden's Build Back Better plan last week, but most failed. Nonetheless, the fact that the 10—spurred on by Democratic Sens. Joe Manchin and Kyrsten Sinema—managed to delay consideration of the budget resolution that will contain Biden's plans and also got the promise of a vote on the hard infrastructure bill from the Senate on a certain day. Not much of a win considering they went in saying they would accept nothing less than a vote on that Senate bill there and then.

But it was enough of a win for the business lobbyists to feel smug about having 10 House members and two senators in the bag for them, and they're certain that with those 12, they can defeat the tax hikes and the spending measures in the $3.5 trillion reconciliation bill. "The business community has made progress with certain Democrats on legitimate policy concerns with some of these proposals and their implications on the economy and international competitiveness," an anonymous lobbyist with ties to Senate Democrats told The Hill. "A lot of those arguments are landing."

Yes, "certain Democrats"—identified in the next paragraph as Manchin, Sinema, and Sabotage Squad ringleader Rep. Josh Gottheimer of New Jersey. Manchin and Sinema—as well as Gottheimer and the others—won't say what about the bill they don't like. They'll wax on and on about the deficit and the future and too much money, but they're not saying what they want to see cut from the bill. For example, the bill will extend Medicare coverage to vision, dental, and hearing care for seniors. Are the 12 opposed to that? Are they okay with millions of seniors who can't afford a dentist visit and have such bad teeth they're malnourished?

Because that's a very real thing. The Centers for Disease Control and Prevention has found that nearly 20% of adults over age 65 have lost all their teeth, that includes more than a quarter of people over age 75. Illnesses among older people, including arthritis, diabetes, heart diseases, and chronic obstructive pulmonary disease (COPD) make this population more likely to get gum disease, but also more likely to get dental care than other adults who don't have these illnesses. Many of the medications older Americans take cause dry mouth, which increases the risk of cavities and tooth decay—something 96% of adults over 65 have experienced with cavities. And 1 in 5 of them have untreated tooth decay.

This has profound consequences for overall health. Nearly half of people over age 65 don't have dental insurance because it is not included in traditional Medicare. Some purchase it through Medicare Advantage plans, "but the scope of dental benefits, when covered, varies widely and is often quite limited, which can result in high out-of-pocket costs among those with serious dental needs or unmet need," the Kaiser Family Foundation (KFF) has found. 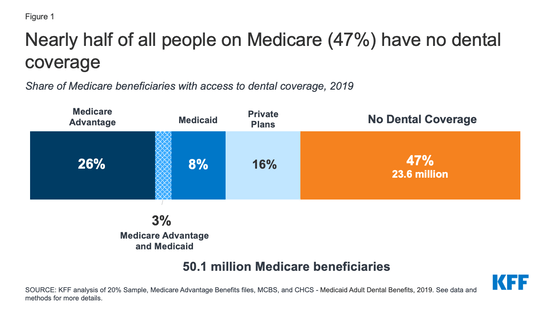 The health effects are very real, particularly when seniors can't eat a balanced diet because of missing teeth or mouth pain. That can lead to malnutrition, weight loss, and declining physical and cognitive abilities. It curtails their social lives. As does not being able to hear and not being able to afford hearing aids.

Sen. Bernie Sanders is including this expansion in the reconciliation bill, because, as he says: "Dental care is health care, and dental care must be part of any serious health care program in the United States." This would give older people and disabled patients on Medicare access to pay for their care. The idea is hugely popular, with 84% of voters supporting it, including 79% of Republicans.

So is this something Manchin, Sinema, and the saboteurs want to see stripped out of the bill? Would making seniors' lives healthier be less important than the deficit? They need to tell us. Is this what they want cut from Biden's agenda?