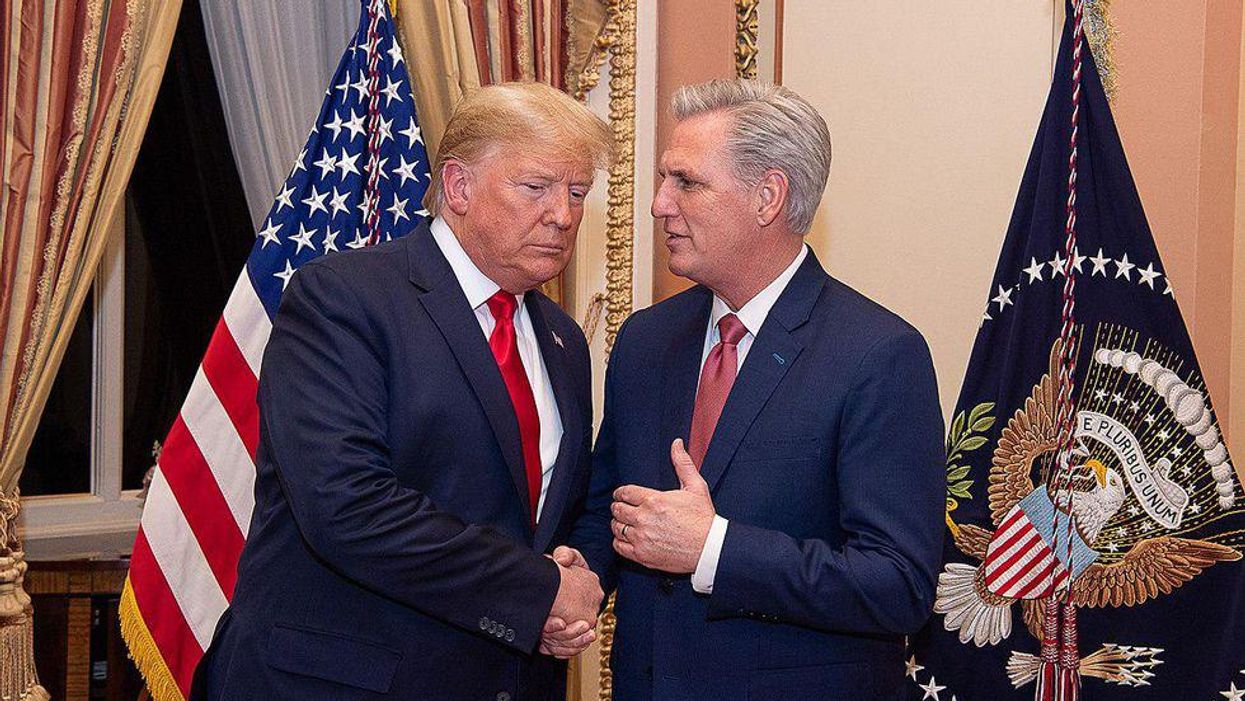 House GOP Leader Kevin McCarthy violated ethics rules — and may have broken the law by obstructing justice — on Tuesday when he threatened telecommunications companies that comply with a Select Committee's request to preserve records relevant to the Jan. 6 Capitol insurrection, according to CNN legal analyst Norman Eisen.

McCarthy warned the companies — including Apple, AT&T and Verizon — that if the GOP takes back the House in 2022, "a Republican majority will not forget." He also claimed that complying with the Select Committee's request would somehow violate federal law. But Eisen, who served as special counsel to the House Judiciary Committee during former president Donald Trump's first impeachment trial, said bluntly Wednesday that "there is no law."

"This is the equivalent of the proverbial gangster, walking in to a business and saying, 'Gee, nice telecomm company you have here. It would be a shame if anything happened to it,'" Eisen said of McCarthy's threat. "It's the exact opposite, it's Orwellian. If these telecomm companies fail to comply with the requirement to preserve these records, if they did what Kevin McCarthy wants and refused to turn over the records, that would be a violation of law. So this is absolutely unjustified by law, and it raises serious questions under the House ethics rules and other laws for Kevin McCarthy himself."

Asked whether McCarthy's threat constitutes obstruction of justice, Eisen responded: "It meets the elements of obstruction. It's a threat. It's an attempt to stop them through that threat, from turning over documents. It's self-motivated, it's corrupt, and McCarthy is worried about what may be in those records on him, and on members of his caucus. It's always a challenge when you have legislative activity — and note that he did this on his official Twitter account — you have protection under the Constitution for legislators, the speech and debate clause, there will be a debate about that.

"The House Ethics Rules .. prohibit any behavior that brings discredit on the House," Eisen added. "What could be more discreditable than threatening companies that if they comply with the law, they'll be punished, when McCarthy has the ability to do that? So I think there's a serious ethics issue, and then legal issues potentially that need to be explored as well."

Eisen added there is "no question" that McCarthy had a "personal motivation" in issuing the threat.

"We know that his behavior is going to be called into question, and the committee is going to probe his exchanges with the president," Eisen said. "We know that members of his caucus, like Matt Gaetz, Mo Brooks, Marjorie Taylor Greene, are also in the crosshairs here, and possibly many others. And it's not just Jan. 6. The committee correctly understands that President Trump's pattern of incitement and that of his enablers went back for months in illegitimately attacking an unquestioned electoral result and whipping people into a frenzy. So there could be some very embarrassing revelations. Remember that many members of the Republican caucus, with no basis at all, voted against certifying the election results."