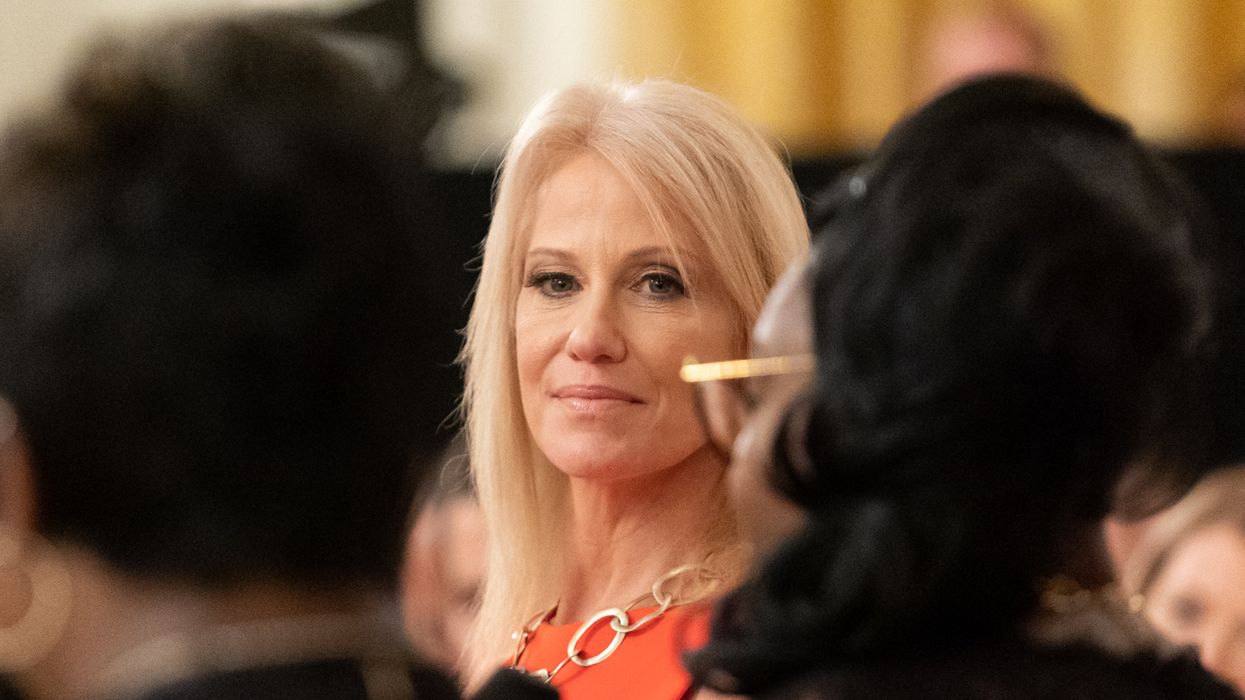 Counselor to the President Kellyanne Conway speaks with social media personalities and live-stream video bloggers Diamond and Silk (Lynette Hardaway and Rochelle Richardson) Thursday, July 11, 2019, during the Presidential Social Media Summit in the East Room of the White House. (Official White House Photo by Andrea Hanks)
Kellyanne and George Conway announce they're stepping down from posts and getting offline for 'family'
David Badash
and
The New Civil Rights Movement
September 04, 2021

235,000 new jobs were created, and unemployment fell to 5.2%, the lowest in 18 months. President Joe Biden spoke about the report Friday morning, saying it "means that we have been adding an average of 750,000 jobs per month, on average, during the past three months."

"And in the three months before I became President? Well, we were adding 60,000 jobs a month," he noted, calling the "total job creation in the first seven months of my administration ... nearly double — double any prior first-year President."

But to Conway, it was all bad news – which appeared to delight her.

"Read it and weep," she tweeted, along with other remarks.

Many were angered by what they saw as her rooting for the economy to fail in order to prop up her former boss's horrific record.

In a rare moment of apparent anger MSNBC host Chris Hayes unleashed his fury on Conway's comments, saying she worked in a White House "that was objectively pro Covid and helped get many many people killed unnecessarily."

"I hope," he added sardonically, she is "not spiritually haunted by the mass death and misery she so blithely facilitated."

Hayes was responding to Washington Post columnist Catherine Rampell, who noted that "this is a strange thing to gloat about. the slowdown in hiring is driven by people refusing to get vaccinated and thereby enabling delta to spread (and kill people) faster."

Those "people refusing to get vaccinated" are in large part almost entirely Trump supporters.

I hope she's enjoying her life after the White House, making lots of money and scheming to get back into power and not spiritually haunted by the mass death and misery she so blithely facilitated.
— Chris Hayes (@chrislhayes) September 3, 2021

Hayes and Rampell were far from the only ones angered or perplexed by Conway's remarks.

Your periodic reminder that Kellyanne Conway is your basic sociopath. https://t.co/1QvGM8ZXhk
— The Hoarse Whisperer (@TheRealHoarse) September 3, 2021

Two things: 1 Gee, I wonder why? Perhaps because YOU people are science denying anti-vaxxers. 2 Giddy about bad job numbers? WTF is wrong with you?
— Nicole Sandler (@nicolesandler) September 3, 2021

lol kellyanne thinking history will remember her for anything other than a degenerate that helped enable the most destructive President in the American modern era is fun
— This Is Not Normal🍦 (@NetworkJunkyz) September 3, 2021

We aren't even coming back from a pandemic. We are in the midst of a serious surge. Because the GQP has politicized the vaccine and common sense safety measures. No helping ending the pandemic, then taking glee in companies having a hard time staffing. Totally on brand.
— Kristen 💙🇺🇸💙 (@GreenKristenL) September 3, 2021

You could go by the December 2020 jobs report since that was Trumps last *full* month. That month the economy lost 140K jobshttps://t.co/9tPT0su2VF
— Anti-Tribalist (@cincinnato) September 3, 2021