Fox News laments that the media is 'moving on from Afghanistan' 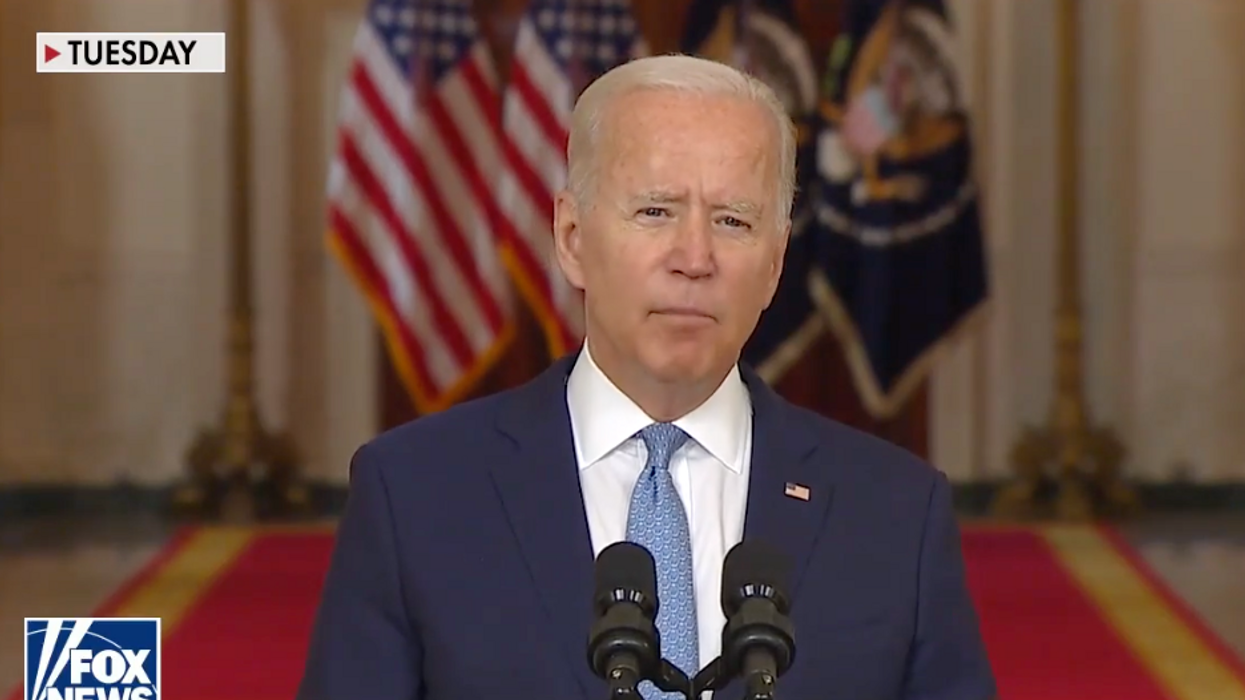 The past week has been one of profoundly significant world events. The United States finally ended a twenty year long war in Afghanistan. The COVID pandemic surged to record levels due to the Delta variant. The Supreme Court declined to block a draconian abortion rights law in the state of Texas. And a hurricane ravaged many parts of country from the Gulf Coast to New England.

Each of those stories are important to the American people and deserve coverage by the media. Unless you're Fox News where the only stories that warrant being told are those that reflect poorly on President Biden or Democrats in general.

Which explains why Fox News posted a story on their website giddily proclaiming that "Liberal media blasted for moving on from Afghanistan crisis." Yes, Fox News couldn't have been happier about this criticism of what they regard as the "mainstream media." The article griped that...

"The liberal media seems to be moving on from President Biden's chaotic withdrawal from Afghanistan, skipping key details and largely ignoring a bombshell report of a leaked July phone call between President Biden and then-Afghan President Ashraf Ghani. [...] Hurricane Ida, the ongoing coronavirus pandemic and the Texas abortion law have seemingly pushed Afghanistan aside."

That's right. Fox News is appalled and saddened that the media is covering actual news. To Fox News Afghanistan should be still be the dominant story, despite the fact that there hasn't been any breaking news from there in a week. The press was all over Afghanistan a week ago when thirteen service members, and an estimated 150 Afghans, were tragically killed in a terrorist bombing. And the press was there when the last of the American troops were evacuated from the country, along with 120,000 Afghan allies, in an unprecedented and successful airlift.

However, in the past week there have been other events that warranted coverage. The COVID pandemic was taking the lives of more than 1,000 Americans every day. The Supreme Court handed down a ruling that effectively overturned the fifty year old Roe v Wade precedent on reproductive rights. And Hurricane Ida tore a path across the Eastern United States that resulted in more than 60 American deaths (nearly five times those in Afghanistan) reported so far. But to Fox News, those are mere distractions from Afghanistan.

The reason that Fox is so obsessed with Afghanistan is that it is a "crisis" that they think they can blame on Biden. Surely Biden isn't responsible for a hurricane, the surging pandemic that is largely due to unvaccinated Fox News viewers, or the laws coming out of Texas. Consequently, those other stories need to be set aside in favor of finding more ways to attack the President.

With that in mind, Fox set about to contrive tales to tell that would cast mud on Biden. But the only ones that they could find were stories about the few Americans still in Afghanistan, and an utterly unnoteworthy phone call between Biden and Afghan President Ghani.

Undeterred, Fox news devoted most of the article to the "blasting" they claimed that the "liberal" media was taking. However, the article quoted only five alleged blasters, all of whom were staunchly right-wing propagandists. For instance...

Poor Fox News is very upset that the story they want to hype because they can use it to bash Biden has been overshadowed by other more urgent and current stories. They think that a week old story - while still important and still being covered - should take precedence over a national weather emergency that killed dozens of people and is still posing extreme hardships for millions of Americans who are displaced from their homes and without power, water, or food.

What's more, Fox News was so disinterested in the Texas abortion law story that they hardly covered it all in the first few hours. And consistent with their reporting for the past year and a half, the coronavirus barely merited a mention, unless it was to applaud Republicans like Florida Governor Ron DeSantis for making his state the national Hot Zone for the pandemic.

We can expect this sort of biased coverage to continue at Fox News. They have never been interested in journalism. Their foundational mission was to manufacture "news" to boost their right-wing agenda. And nothing illustrates that better than how they are covering current events this week.