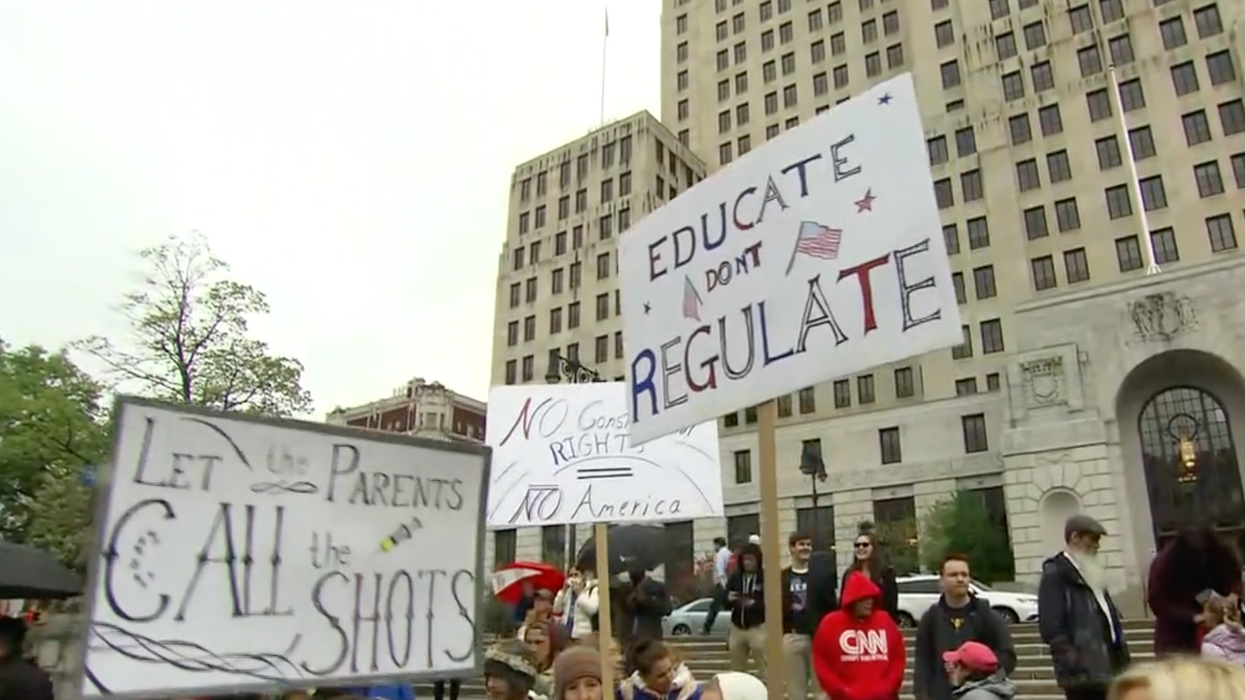 Not all Christians are extremist anti-vaxxers, anti-maskers or coronavirus deniers who encourage churchgoers to put themselves at risk of being killed by COVID-19. But the lunatic fringe of Christianity — the far-right Christian nationalist movement — has been a leading promoter of coronavirus denial. And reporter Jack Jenkins, in an article published by the Washington Post on September 14, examines the anti-vaxxer, anti-masker hysteria coming from Christian nationalists.

"Christian nationalist" is a term that is now being used to describe what has historically been called the religious right or the Christian right, a movement of far-right white evangelicals that gained prominence in the Republican Party during Ronald Reagan's presidential campaign in 1980. In the 1980s, leading promoters of Christian nationalism included the late Rev. Jerry Falwell Sr., Jimmy Swaggart (a Pentecostal minister) and the Christian Broadcasting Network's Rev. Pat Robertson. More recently, Christian nationalism has been closely allied with former President Donald Trump's MAGA movement — and in Christian nationalist and MAGA circles, it is fashionable to downplay the dangers of COVID-19.

Jenkins explains, "Appeals to Christian identity were common during the Trump Administration, and Christian nationalist themes were widely visible during the January 6 insurrection at the U.S. Capitol. But with Trump out of office and hundreds of insurrectionists now facing federal charges, hardline Christian nationalists are increasingly fueling their movement with opposition to coronavirus vaccines and mask mandates, which they cast as threats to their religious and constitutional freedoms."

One of the unhinged Christian nationalists who has been pushing anti-vaxxer and anti-masker extremism in 2021 is Greg Locke, pastor of Global Vision Bible Church in Mt. Juliet, Tennessee. During one of his recent rants, Locke declared, "Do something in your hometown. Stir your school board meeting up for the glory of God. Run for office. Do something. Go let some churches know in town they need to open up and quit playing the coward. Make some Facebook videos until they de-platform you. Don't just go to conferences and enjoy people — save the nation."

Of course, many non-evangelical churches — mostly Mainline Protestants and Catholics — have been encouraging Americans to increase their chances of staying alive by getting vaccinated for COVID-19. Some churches, including members of the African Methodist Episcopal Church, have even helped churchgoers get vaccinated while White Christian nationalists are urging them not to.

"Locke's call to 'stir up' school board meetings harks back to the strategy of the Religious Right in the 1980s and 1990s, which agitated at — and eventually took control of — school boards and other local government bodies in an effort to shift American culture from the grass roots up," Jenkins writes. "But today's Christian nationalists are arguably more confrontational than their Religious Right progenitors. At a school board meeting in Lee County, Florida on August 30, protesters who gathered outside to oppose an impending mask mandate wore shirts that read 'Jesus is my savior, Trump is my president' — and the logo of the recently launched Conservative Christians of Southwest Florida, which features an outline of the state emblazoned with the American flag."