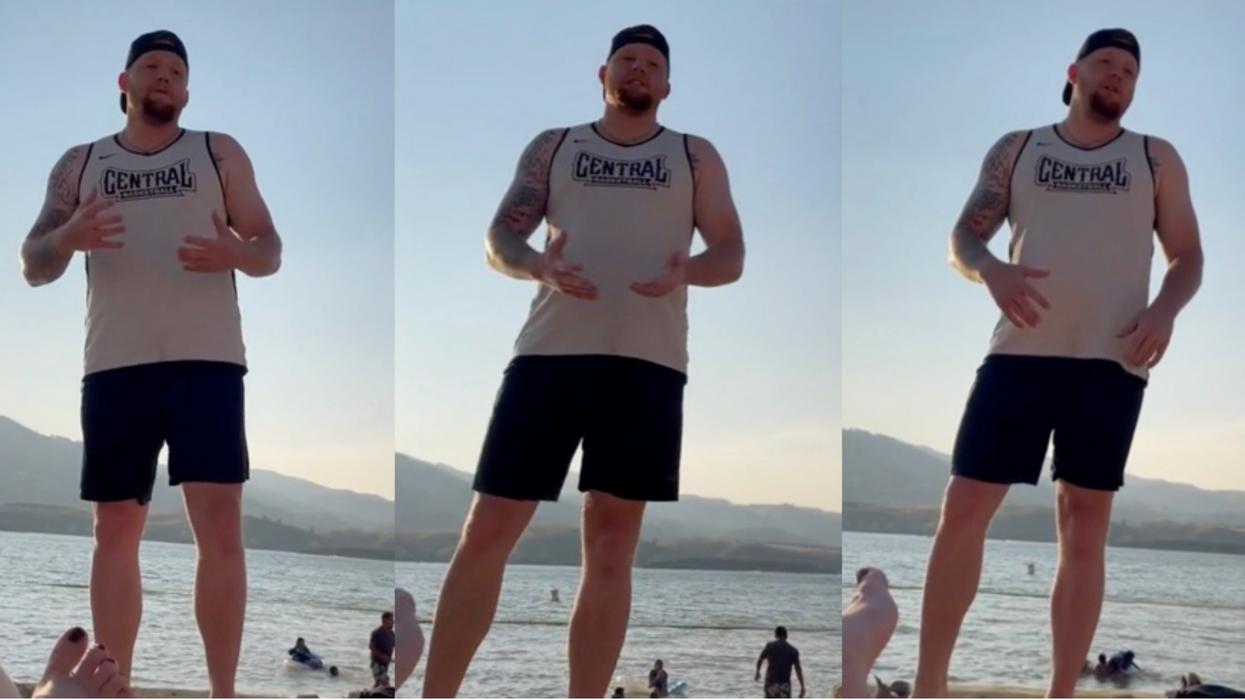 A Christian extremist flouting what he calls his "freedom of speech" is refusing to apologize to several women he harassed at a beach by telling them "the truth" that in his estimation their bathing suits were "pornographic" and not appropriate. The man says he felt a "righteous anger" and a "boldness by the Holy Spirit to go in to confront" them.

A viral TikTok video posted by one of the young women, Mia, in Fort Collins, Colorado shows the man Newsweek says is Logan Dorn, telling them they are "flaunting your stuff," and "your whole body is showing."

The women repeatedly urge the man to leave them alone, but he responds by saying, "Here's the thing, there's free will in America, there's freedom of speech," apparently unaware that that First Amendment activity also protects how people choose to dress.

Dorn tells them to "take young eyes into consideration," while calling their appearance, "pornography."

"If men of God don't stand up then our society's going to go down the drain because there's no morality," he insists in the video.

At one point they ask him if he will also be confronting men, and he replies: "that's a lot different."

In a separate video, below, which Dorn recorded he defends himself, saying a member of his family said they had to move because of how the women were dressed.

"And so right then in there I just had a just, a righteous anger come over me," Dorn says in his video. "And also just a boldness by the Holy Spirit to go in to confront these ladies and to speak truth that, 'hey what you're wearing is not okay for a nine year old boy, or a six year old boy,' and reason being is because coming from being introduced to pornography at a young age, it destroyed me. And I, in that moment just a righteous anger of to defend and protect young eyes, came over me, and so I decided to speak truth that 'hey you know what you're wearing is not okay that you can't find your worth in your body, that the physical never satisfy.' You know that, that 'there's going to come a day when you, when you're going to be face to face with God.' You know, things of that nature."

Dorn, defiantly, continues, saying, "I'm not going to apologize. I'm just going to say, I'm going to continue to stay on on the truth, I'm I continue to stand on the Word of God. Our society is on such a downclimb of morality of pornography and lust is at an all time high."

Then he starts to attack transgender people.

"There's a longing deep in your soul, that only Jesus can satisfy," Dorn concludes.