Rep.Alexandria Ocasio-Cortez at South By Southwest 2019 in Austin, Texas, nrkbeta
AOC catches a Republican launching a 'cynical' smear against her — and has the receipts to prove it
Ari Paul
and
FAIR
September 26, 2021 Economy

It's like Lenin said: There are decades when nothing happens, and there are dresses where decades happen.

Rep. Alexandria Ocasio-Cortez's "Tax the Rich" dress at the Met Gala (Vogue, 9/16/21) might have passed through the media as a mere photo opportunity or act of class-conscious performance art, but given that it happened near the 10th anniversary of the first day of the Occupy Wall Street protests, the event may be an indicator of how much Occupy has moved the public toward policies of aggressively taxing the wealthy to pay for needed social programs, education, public employment and infrastructure.

And corporate media's response indicates that they are worried that history might be on Ocasio-Cortez and her dress's side. 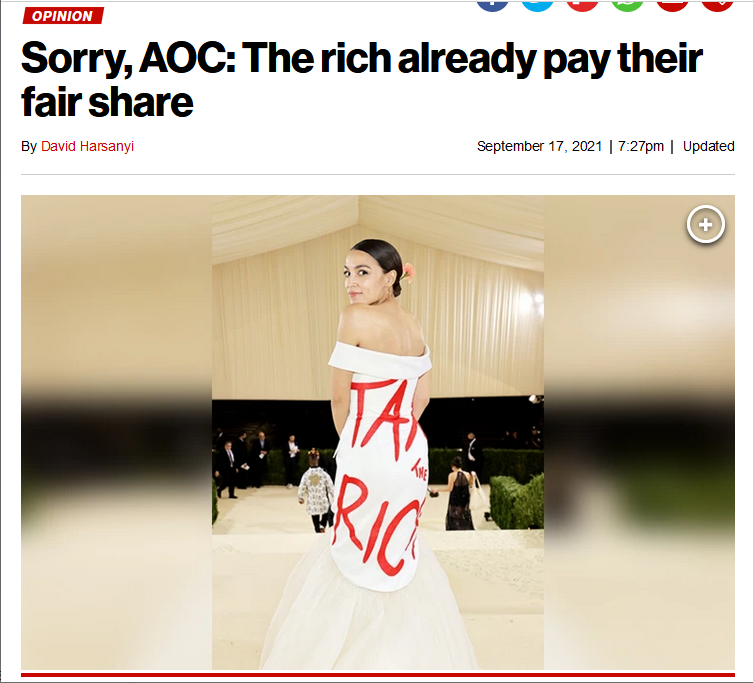 David Harsanyi (New York Post, 9/17/21) argues that the rich shouldn't pay more because our tax system is already progressive–which is neither logically nor empirically true.

The Murdoch-owned New York Post (9/17/21) led the charge against her protest, with David Harsanyi complaining, "Despite perceptions, the highest-income strata of taxpayers are the only ones who pay a larger share of taxes than their share of income." This message was echoed by television shock jock Bill Maher (Daily Mail, 9/18/21), even though a ProPublica investigation (6/8/21) found that the super-rich—like Michael Bloomberg, Warren Buffett and Jeff Bezos—pay next to nothing in taxes, demolishing "the cornerstone myth…that everyone pays their fair share and the richest Americans pay the most."

The New York Post (9/21/21), on its front page, highlighted a response to AOC from Democratic mayoral nominee Eric Adams, whom the paper (5/10/21) had enthusiastically endorsed. Adams said that Ocasio-Cortez sent the "wrong message for New York City," offering austerity logic as an alternative: "Instead of impulsively advocating for raising taxes on rich Big Apple residents…the city should first find ways to trim fat in the city budget." In addition to endorsing Adams, the Post (7/27/21) eagerly broke the news that Adams told supporters that he has declared "war on AOC's socialists."

Matthew Yglesias (Bloomberg, 9/19/21), himself the product of Manhattan patrician society, chastised the second-term congressmember representing the Bronx and Queens for casting a broad net over the upper class, rather than focusing her message specifically on tax loopholes. The Washington Post's Megan McArdle (9/14/21) echoed Yglesias' criticism, adding that wearing such a dress to the Met Gala is "a bit like wearing a 'tax the rich' T-shirt to your job as a bespoke tax attorney," because taxing the rich just creates more tax attorneys, "so the walking billboard is less a case of 'speaking truth to power' than an endorsement of the whole enterprise."

The Washington Post's Kathleen Parker (9/14/21) denounced the gala's fall from its elegant past—"today's Met Gala is not the playground of Diana Vreeland, Pat Buckley and Jacqueline Kennedy Onassis"—and said she was at a loss for words to describe the party's "parade of political demonstrators whose eccentric garb sometimes garbled the message," as the theme of the event was to explore the "lexicon" of fashion itself.

Numerous outlets (Forbes, 9/13/21; Daily News, 9/14/21; Fox News, 9/14/21; USA Today, 9/14/21) played up the criticism that Ocasio-Cortez was acting hypocritically by attending the gala, because it is a pricey event attended by the rich, a point that runs aground on the fact that bringing the message of taxing the rich to rich people was, in fact, the idea. As one Washington Post writer (9/14/21) correctly perceived, the gala's audience were now discussing "the embarrassment of undertaxed riches in a social season marred by disease and destitution." 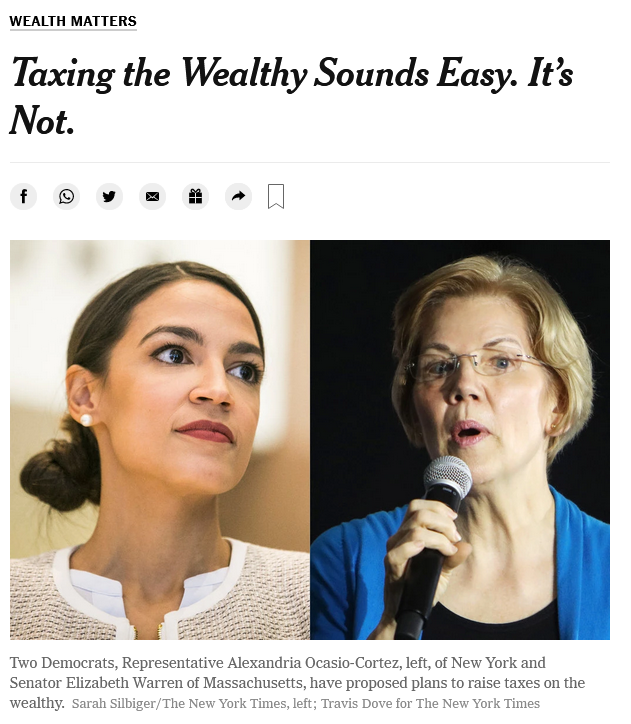 The idea of a wealth tax was unsurprisingly derided by "Wealth Matters" (2/1/19), a New York Times column offering "insights from Paul Sullivan on the mindset and strategies of the affluent."

While Ocasio-Cortez is hardly the first left-of-center politician calling for more taxes to fund social programs, as leader of the "Squad"—a group of House Democrats largely aligned with Sen. Bernie Sanders—she has become the punching bag for the establishment media in a campaign to dampen pro-taxation rhetoric.

Since her ascendance in Congress, the New York Times (1/28/19, 2/1/19, 2/7/19) has responded to Ocasio-Cortez's tax rhetoric with a sort of "yes, but it's more complicated than that," embracing a watered-down version of progressive taxation, while Barron's (1/23/19) and the Wall Street Journal (1/21/19, 1/23/19) have gone further to suggest that her proposed 70% marginal tax rate would destroy the American economy. Factcheck: The US economy flourished with a 91% top marginal tax rate under Republican President Dwight Eisenhower (AP, 1/31/19).

McArdle, part of the recent AOC bashing, has scorned the idea of taxing the rich more generally in a piece (Washington Post, 6/9/21) that carried a photo of the paper's owner and world's richest human, Jeff Bezos.

This skittishness about new taxes in the media reflects a general anxiety about progressive taxation in the political class. Anti-tax ideology is perhaps the glue that unites the Republican Party's various factions, which passed sweeping tax cuts under the Trump administration (NBC, 12/22/17). Unlike Republicans, who can unite around keeping taxes low, though, Democrats have difficulty coming together when it comes to tax hikes for the rich (Bloomberg, 9/14/21).

Some Democrats besides Ocasio-Cortez are also onboard with new federal taxation (CBS, 9/13/21), and polling shows "taxing the wealthy" is a popular idea (Gallup, 6/4/21; Reuters, 1/10/20). But there has been resistance within her party to Democratic Sen. Elizabeth Warren's proposal for a new wealth tax (The Hill, 8/9/19). The Wall Street Journal (4/7/21) blasted then-New York Gov. Andrew Cuomo for giving into state lawmakers who pushed for more state taxes, a move he had successfully resisted until his various scandals eroded his political capital. 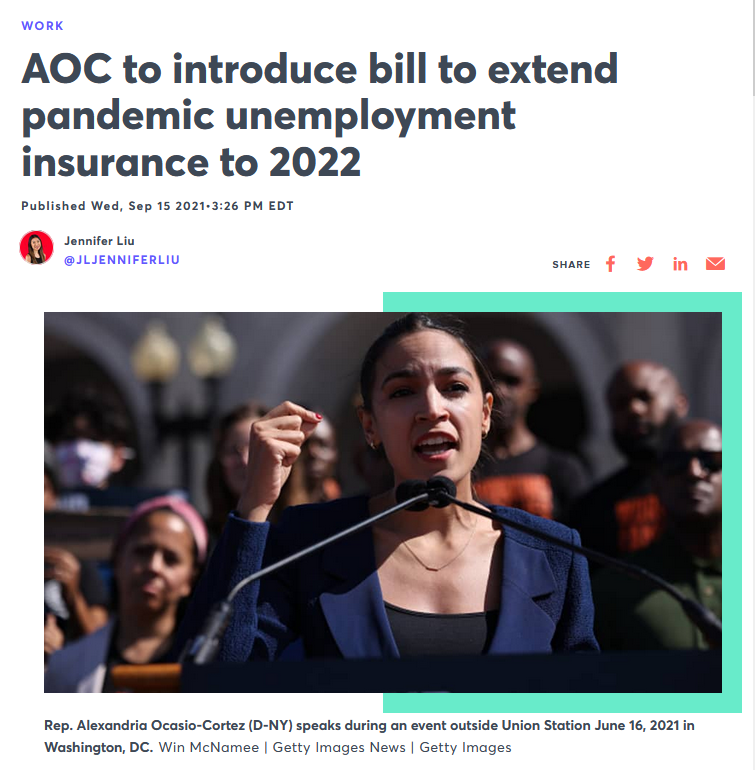 Alexandria Ocasio-Cortez (CNBC, 9/15/21): "We've just simply allowed pandemic unemployment assistance to completely lapse, when we are clearly not fully recovered from the consequences of the pandemic."

It isn't solely "taxing the rich" that has become more popular with voters. Other social democratic ideas like single-payer healthcare (Pew Research, 9/29/20) and a $15/hour minimum wage (Reuters, 2/25/21) enjoy broad support, and "Americans view unions more favorably now than they have since 2003" (Reuters, 7/12/21).

Yet it's still hard for the political class and media to take notice that this is becoming the mainstream. That's why someone like Ocasio-Cortez, in addition doing things like introducing legislation to extend unemployment insurance (CNBC, 9/15/21), feels the need to call attention to the issue of taxing the rich in a very public way, to get corporate media talking about it. (Proposed tax increases for the rich have become a key stumbling block to passing the Biden administration's proposed $3.5 trillion social spending bill—New York Times, 9/7/21.)

When then–NYC Mayor Michael Bloomberg (Guardian, 11/15/11) defended using brutal police force to evict OWS protesters from Zuccotti Park in the city's Financial District, he challenged the movement by saying "Now they will have to occupy the space with the power of their arguments." That AOC's publicity stunt around the slogan "tax the rich" near the tenth anniversary of OWS caused such an uproar is just the tip of the iceberg in terms of the life and success of the power of Occupy's ideas. The ascendance of democratic socialist candidates around the country, and Bernie Sanders' impressive presidential primary performance in 2016 and 2020, are examples of how those arguments may be more powerful than Bloomberg—the media mogul who appeared in the aforementioned ProPublica report on billionaires who skirt paying taxes—might have realized.