Trump is spooked by the Jan. 6 probe — and he should be 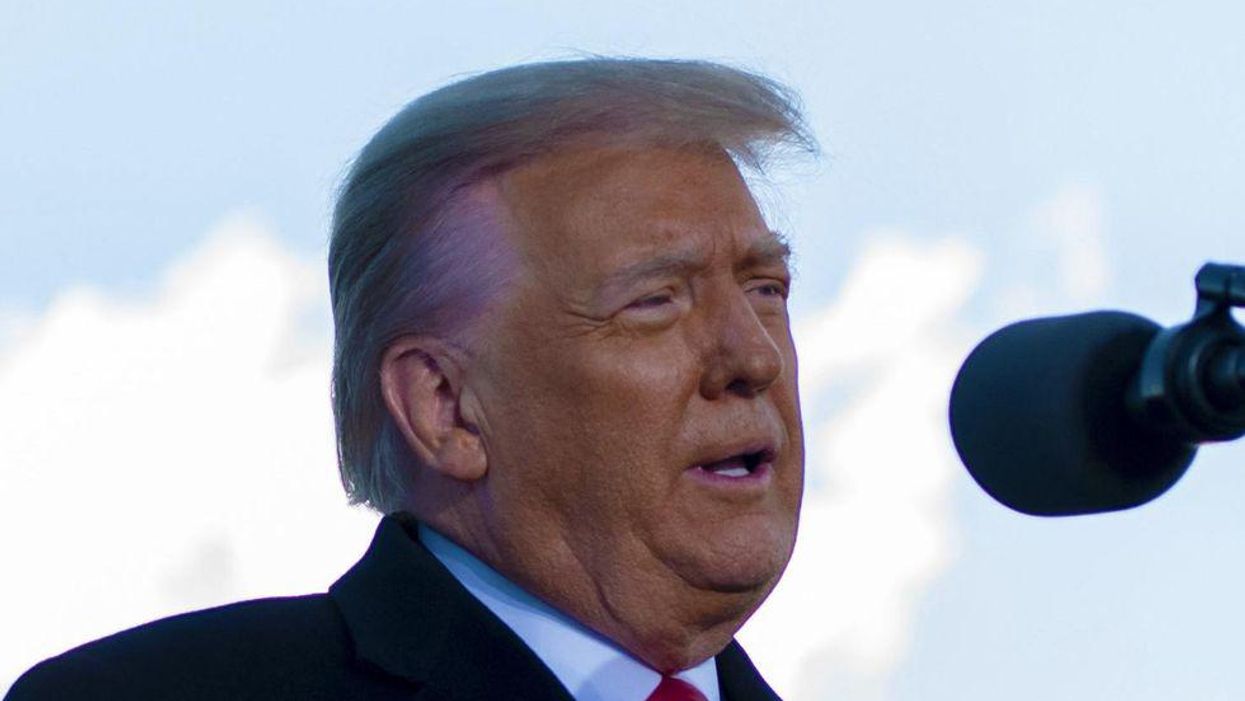 President Donald J. Trump gives a speech at his farewell ceremony on Joint Base Andrews, Md.,Jan. 20, 2021. After his speech, he greeted guests then boarded his final flight on a presidential aircraft. (U.S. Air Force Photo by A1C Essence Myricks)
Heather Digby Parton
and
Salon
August 27, 2021

There is so much going on at the moment between the massive spike in COVID due to millions of intransigent holdouts who refuse to get vaccinated and the excruciating events unfolding in Afghanistan that one important story got lost this week: The House January 6th Committee sent letters to eight different government agencies demanding documents and communications regarding administration strategizing to overturn the 2020 election results.

Considering what happened on January 6th and all the open discussions by former President Trump and his allies prior to that date, it's very reasonable to suspect that this evidence exists. But what has surprised people is the sheer scope of their records requests. Here are some examples:

And that's just for starters.

There are requests for documents going back as far as April of 2020, prompting MSNBC's Rachel Maddow to ask Committee Chairman Bennie Thompson, D-Ms, what lawmakers were looking for. His reply? They have information that he can't go into but which is credible enough that they are seeking evidence to prove it. Recall, April 2020 was about the time that Trump was starting to rail against mail-in voting, following up on his 2016 strategy by laying the groundwork to reject the results of the election unless he was declared the winner. Perhaps Thompson believes this strategy may have been more formal than it seemed?

The committee is looking at Trump himself and dozens of his closest associates, including his children Ivanka, Eric and Donald Trump Jr, as well as close confidantes such as Roger Stone, along with political friends like Chris Christie. It appears they suspect at least one top GOP congressional aide is involved in publicizing the "Stop the Steal" rally which turned into a violent insurrection. They want information about the Trump henchmen who were placed in important positions throughout the government after the election as he set about invalidating the results. And they are demanding all documentary evidence regarding the planning and funding of the January 5th and 6th rallies and any other plots to slow down the confirmation of the electoral vote.

They also demanded a lot of information from the Pentagon, including documents pertaining to the delay of the transition and any discussion of the potential use of the military to impede the transfer of power. They even asked why the DOD denied that Michael Flynn's brother, Lt. General Charles Flynn, participated in the January 6th meetings about the response to the attacks. Michael Flynn, after all, was intimately involved in the "Stop the Steal" movement.

Probably the most important requests are for information from the Department of Justice, which former acting solicitor general Neal Katyal characterized as serving as "a blank check" throughout the Trump presidency. The DOJ finally said "no" when Trump tried to make them help him declare the election corrupt. "How significant must the demands have been for even them to say no to Donald Trump?" Katyal asked Joy Reid on MSNBC.

It's a comprehensive set of demands investigating whether Trump planned to invoke various executive powers and strategies to remain president despite losing the election. In other words, they are seeking the documentary evidence of Donald Trump's coup attempt.

This comes on the heels of news that the committee plans to require phone companies to preserve all their electronic data around January 6th, including for members of Congress and others who were in communication with Trump on that day or involved in the planning.

Most of the government requests will be answered by the National Archives which keeps all official records. It will be very interesting to see whether members of the administration made "memos to the file" of these events in case this ever came back to haunt them.

Needless to say, Trump was not amused. In fact, he had something of a temper tantrum, putting out this statement:

"The Leftist "select committee" has further exposed itself as a partisan sham and waste of taxpayer dollars with a request that's timed to distract Americans from historic and global catastrophes brought on by the failures of Joe Biden and the Democrats.
Unfortunately, this partisan exercise is being performed at the expense of long-standing legal principles of privilege. Executive privilege will be defended, not just on behalf of my Administration and the Patriots who worked beside me but on behalf of the Office of the President of the United States and the future of our Nation. These Democrats only have one tired trick—political theater—and their latest request only reinforces that pathetic reality."

All of this seems even more necessary in light of NBC's Lester Holt's interview on Thursday night with the Capitol police officer who shot insurrectionist Ashlie Babbitt as she broke through the door that separated the mob from the trapped officials they were hunting on January 6th. He had not been officially identified but felt it necessary to come forward and tell his side of the story and it was compelling, particularly when he pointed out that he would have done the same to protect the life of the president and his family if the same thing happened when they were in the capitol. The right-wing crazies have been calling for his head for weeks, led by Trump who is working overtime to turn Babbitt into an innocent martyr and raise suspicions about this officer whose name is Lt. Michael Byrd, a 28-year veteran of the Capitol Police and who also happens to be Black, which I'm sure had nothing to do with Trump's eagerness to portray him as a crazed gunman.

If you want to see how the right-wing media is handling this, Tucker Carlson is a good example:

Whether a former president can legally claim executive privilege on evidence that he fomented a coup is a complicated question but either way that's going to take time. The good news is that this investigation is going to be serious and thorough by looking at what happened on January 6th from a very wide perspective which, for the first time with Donald Trump, may succeed in actually getting to the bottom of what he did.