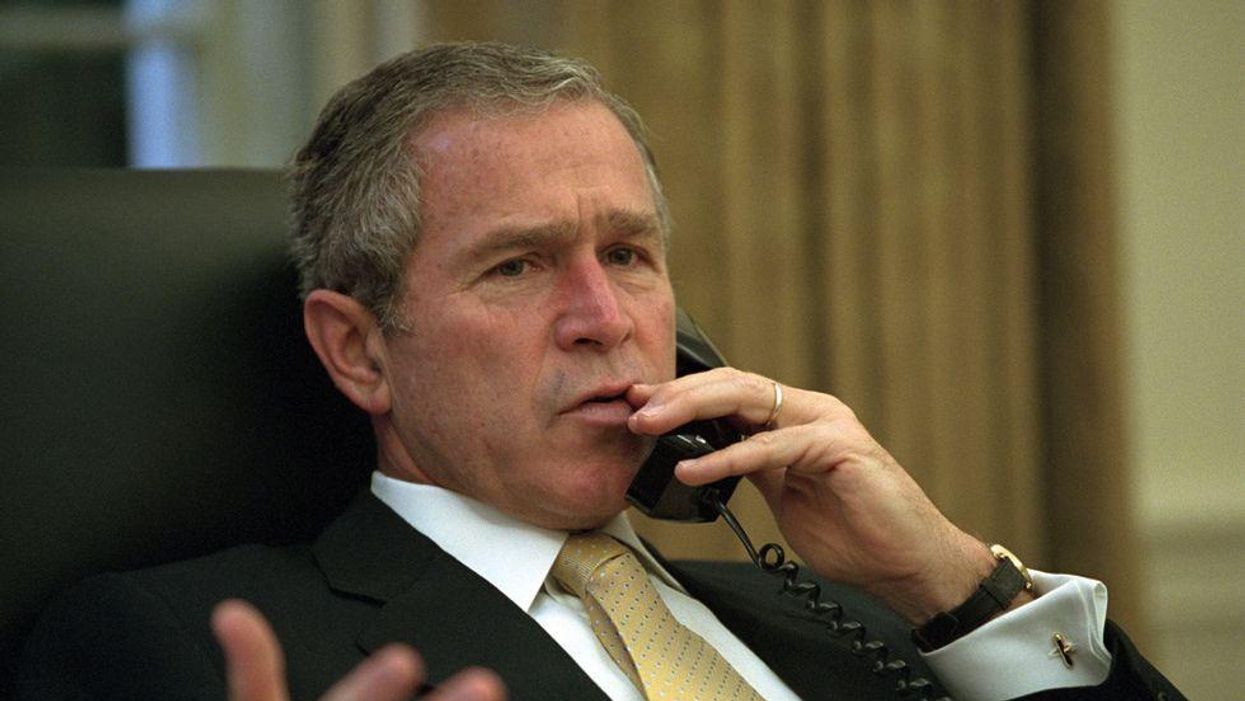 At a U.S. Special Forces camp near Kandahar, Afghanistan, on December 5, 2001, the Taliban offered an unconditional surrender. Furthermore, they would disband and disarm: a military force would no longer exist.

George W. Bush ignored the offer and continued attacking the Taliban until the end of his term. If only in self-defense the Taliban fought back, eventually regaining the battlefield initiative. Barack Obama fought the Taliban for eight years more. Donald Trump did so for the next four.

Twenty years later, after the squandering of thousands of lives and trillions of dollars, President Biden withdrew American troops from Afghanistan—and drew angry criticism for the chaotic exit that followed.

How perverse we have become. We chastise President Biden for a messy ending of the war in Afghanistan and fail to indict George Bush for its illegal beginning.

Within ten days of taking office the Bush Administration formalized a decision to invade Iraq. Long before 9/11 the attack on Afghanistan was scheduled. Neither proposed incursion had the slightest thing to do with terrorism: the objectives were preemptive access to Iraqi oil and a pipeline right-of-way across Afghanistan for the Unocal Corporation. 9/11 offered a spectacular and fortuitous covering alibi; President Bush declared a "war on terrorism" and launched his premeditated wars.

Osama bin Laden was portrayed as an iconic terrorist, to be apprehended for his orchestration of 9/11. But George Bush from his first day in office, January 20, 2001, could have negotiated with the Taliban to assassinate Osama bin Laden or to surrender him into U.S. custody. That was the standing offer the Taliban tendered in late 2000, seeking to retain U.S. favor after bin Laden bombed the U.S.S. Cole. The Bush Administration refused the offer, four times prior to 9/11 and once more five days later.

Saddam Hussein was said to be an intolerable terrorist threat, too. "Regime change" was necessary to remove him from power. In February of 2003, Saddam Hussein offered to enter voluntary exile in Turkey, Egypt, or Saudi Arabia. Here was "regime change" handed on a platter to George Bush, but a peaceful one. The offer was brushed aside.

George Bush needed terrorists, alive, at large, and in residence in Afghanistan and Iraq, to make his "war on terrorism" credible.

The pipeline project was the first order of business. On October 7, 2001, the invasion of Afghanistan was underway, but the billions of barrels of Iraqi oil were never far from mind. Seven weeks later, on November 27, 2001, the President ordered his Defense Department to plan the invasion of Iraq. (That was eleven months before Congress would authorize it.)

The aggressions were titanic failures. Yes, a few American oil companies operate in Iraq today, but they are barely visible among scores of other firms from Egypt, Italy, Japan, France, Austria, the UK, Canada, Hungary, India, Norway, and the holders of the largest contracts by far, Russia and China.

Afghanistan lies in a state of seething chaos. There will be no American pipeline across the country: twenty years of staggering costs in lives and treasure for nothing. Those costs might have been avoided: violence in Afghanistan could have ended two months after George Bush turned it loose.

Anand Gopal, an American journalist, tells the story with unusual authority. He moved to Afghanistan in 2008, learned the language, and for four years he traveled the country freely.

His book appeared in 2014: No Good Men Among the Living: America, the Taliban, and the War Through Afghan Eyes.

It relates the Taliban's surrender:

His back to the wall, Mullah Omar [leader of the Taliban] drew up a letter to Hamid Karzai, acknowledging his selection as interim president. The letter also granted Omar's ministers, deputies, and aides the right to surrender.
On December 5 [2001] a Taliban delegation arrived at the US special forces camp north of Kandahar city to officially relinquish power...[The Taliban]...pledged to retire from politics and return to their home villages. Crucially, they also agreed that their movement would surrender arms, effectively ensuring the Taliban could no longer function as a military entity. There would be no jihad, no resistance from the Taliban to the new order.

It took barely two months after the U.S. invasion of Afghanistan in October 2001 for the United States mission to point itself toward defeat.
"Tomorrow the Taliban will start surrendering their weapons," the Taliban's spokesman Mullah Abdul Salam Zaeef announced on December 7, 2001. "I think we should go home." But the United States refused the group's surrender, vowing to fight on to shatter the Taliban's influence in every corner of the country.

Accepting the surrender would have denoted a great victory in the "war on terrorism." But George Bush was fighting a war for oil and empire, and victory would pose a huge tactical difficulty: with no enemy to fight he would have to demobilize his forces in the Mideast and bring them home. That he could not tolerate: the great prize, the Iraqi oil, had yet to be won, so the fighting in the Mideast would have to be sustained—as a "war on terrorism"—until the invasion of Iraq could be planned, authorized by Congress, and sold to the American people. The Taliban's offer was simply dismissed, and the fighting continued—for twenty years.

And now President Biden has called a halt in Afghanistan, in humiliating defeat. The Taliban, who once offered to disarm and disband, have taken control of Afghanistan. The national media acknowledge the defeat, but trumpet "the end of America's longest war" as recompense. That is grossly misleading: American military violence rages on in the "war on terrorism." U.S. combat troops remain stationed in Iraq, Syria, Libya, Kenya, Somalia, Yemen, Jordan, Kuwait, Djibouti, Qatar, the UAE, Turkey, the Philippines, and Cyprus, and we conduct counterterrorism operations in 61 additional countries around the world.

This madness is the legacy of the Bush Administration, and successive presidents have done nothing to end it. Withdrawing troops from Afghanistan is a no-brainer tactical retreat, but George Bush's bogus war plunges mindlessly ahead.

President Biden, carpe diem. Call the "war on terrorism" for the fraud it is and end it. Bring all the troops home, from everywhere.