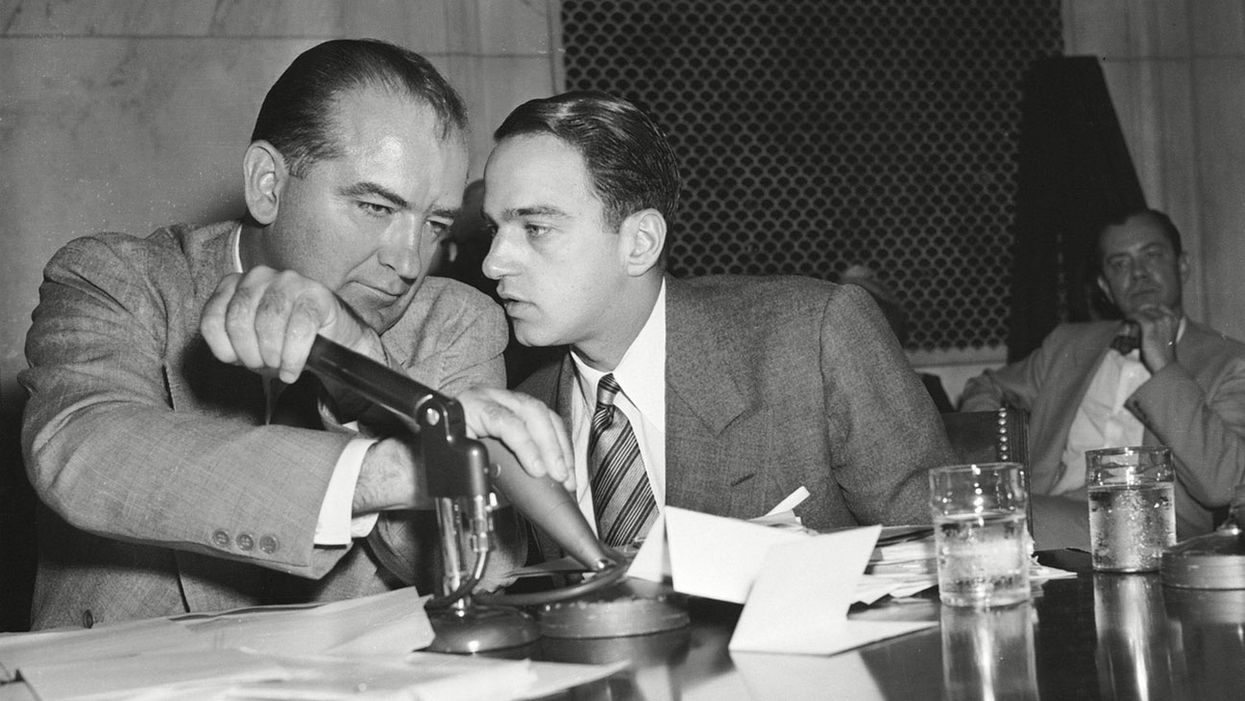 A still from Where’s My Roy Cohn? by Matt Tyrnauer, an official selection of U.S. Documentary Competition at the 2019 Sundance Film Festival. Courtesy of Sundance Institute | photo by Ap/REX/Shuttersock All photos are copyrighted and may be used by press only for the purpose of news or editorial coverage of Sundance Institute programs. Photos must be accompanied by a credit to the photographer and/or 'Courtesy of Sundance Institute.' Unauthorized use, alteration, reproduction or sale of logos and/or photos is strictly prohibited
Outlandish conspiracy theories didn’t start with Trump’s presidency. Republicans have been promoting ‘fringe crackpots’ for decades: political historian
Matthew Rozsa
and
Salon
August 29, 2021

A few years ago, I was interviewing Roger Stone when he happened to use the phrase "new McCarthyism," describing those who accused former Trump campaign chair Paul Manafort of being a tool of Russian interests. This was more than a little ironic for abundant reasons, especially given that as a younger man, DonaldTrump had been mentored by the infamous Roy Cohn, Joe McCarthy's right-hand man, Roy Cohn.

Stone tried to defend himself by saying that he'd read M. Stanton Evans' book "Blacklisted by History," and found it "a more balanced review of exactly what McCarthy was talking about and what he did." That didn't make much sense either: Evans' book is a revisionist attempt to defend McCarthy, which is widely maligned by serious historians. It's not surprising that a longtime Republican operative would read it — but then, if Stone was on McCarthy's side, why was he accusing other people of "new McCarthyism"?

Stone tried to salvage that one too, arguing, "Whether I like it or not, people view McCarthyism, as a label, as the hurling of false accusations." Overall, though, there was more truth-telling in that exchange than you normally get from Stone. The Republican Party of 2021 is very much the party that McCarthy envisioned, centered on a supposed strongman's personality, viciously seeking to destroy any outsiders seen as threats and rooted in blatant bigotry. In that context, it's important to clarify what Joe McCarthy did and why his legacy is still dangerous.

McCarthy was elected to the Senate from Wisconsin in 1946, and his early years in office were unmemorable — except for one revealing episode. He denounced the death sentences handed down in U.S.-occupied Germany to a group of Waffen-SS soldiers convicted of murdering American troops in an event known as the Malmedy massacre. This moment in McCarthy's career, though virtually forgotten today, is highly instructive On the surface, he presented himself as a crusader for justice, arguing that the Army was covering up judicial misconduct and that this called into question the validity of the Germans' confessions. (He never provided any evidence for this.)

In fact, McCarthy was doing something much more sinister. On some level he understood that defending a group of Nazis would appeal to the antisemitic American far right at a moment when expressing public hatred for Jews was unacceptable. At least implicitly, McCarthy was accusing the Jewish Americans who helped investigate the crimes of seeking vengeance and perpetrating injustice. Today we might call this flipping the script: Suddenly Jewish people, in the immediate aftermath of the Holocaust, were persecutors, and "Aryan" Germans — those who had committed mass murder — were their victims.

That wasn't enough to make McCarthy a right-wing superstar, probably because any hint of pro-Nazi sympathies was completely out of bounds in the postwar years. McCarthy needed a different vehicle to achieve political stardom and found it in 1950 when, while delivering a speech in West Virginia, he claimed to have a list of more than 200 known Communists who were allowed to work in the State Department. (No such list existed.) '

The speech was a smash hit and over the course of four years, the Wisconsin senator accused countless people of either actually being Communists, being "Communist sympathizers" (whatever that meant) or being "soft on Communism," a hopelessly vague term that could be applied to almost anyone who didn't support open military confrontation with the Soviet Union. With America on edge during the early years of the Cold War, McCarthy inflamed widespread paranoia, without once provided evidence that any of his targets had done anything illegal. That didn't much matter: He was saying what unhappy right-wingers wanted to hear, and they supported him with enthusiasm. (Yeah, some of this might sound familiar.) gave him tremendous political influence as a result.

Many of McCarthy's targets were political opponents, like Sen. Millard Tydings, a Maryland Democrat who had criticized him, and Illinois Gov. Adlai Stevenson, the Democratic presidential nominee in both 1952 and 1956. He also persecuted members of marginalized groups, claiming that they could be vulnerable to Communist influence: Today we would say he was obsessed with the "cultural elite," going after East Coast intellectuals and LGBT people (although that term did not exist), left-wing activists and journalists, members of the Washington political establishment and, of course, Jews. His strident attacks powered Republican victories in the 1950 midterm elections, and plenty of Southern Democrats liked him too.

McCarthy was rewarded with a powerful chairmanship, at the Senate Committee on Government Operations, where Cohn and the young Robert F. Kennedy serving as assistant counsels. There he targeted the Voice of America, the overseas library program of the International Information Agency (this led to book burnings), several prominent Protestant clergymen and finally the U.S. Army. That last crusade proved to be a bridge too far: Joseph Welch, chief counsel for the Army, called out McCarthy on national television for his cruelty and recklessness, famously demanding, "At long last, sir, have you no decency?"

The American public, seeing McCarthy exposed as a bully and liar, rapidly turned against him. He died in 1957, likely as a result of alcoholism, but if he'd lived would likely have lost his Senate seat the following year. Although the term "McCarthyism" had been coined well before his downfall, that guaranteed that it would be an epithet rather than a compliment. From that point on, even Republicans began using the term "McCarthyist" to refer to baseless and malevolent smears.

This brings us to the Trump era. First of all, the accusations that Trump's campaign colluded with Russian agents in 2016 are not "McCarthyist," both because they were highly plausible (and at least partly true) and because they had nothing to do with left-wing or Communist ideology. For a better idea of what McCarthyism actually entails, consider this passage from a 2017 article about Cohn's influence on Trump. It practically lays out, step by step, the ways that Trump's narcissism would later fuel his attempts to overturn the 2020 election:

For author Sam Roberts, the essence of Cohn's influence on Trump was the triad: "Roy was a master of situational immorality . ... He worked with a three-dimensional strategy, which was: 1. Never settle, never surrender. 2. Counter-attack, counter-sue immediately. 3. No matter what happens, no matter how deeply into the muck you get, claim victory and never admit defeat." As columnist Liz Smith once observed, "Donald lost his moral compass when he made an alliance with Roy Cohn."

That attitude is a key element of McCarthyism. The only two ingredients missing from that description are the blatant pandering to bigotry and paranoia and the way supporters are seduced by a narcissist's charismatic allure into a sense of shared omnipotence with them. Without the former, the McCarthyist lacks the fuel necessary to whip up the mob against supposed enemies; without the latter, the demagogue can't convince the mob that his individual desires are also their own.

The bogus and evidence-free claim that Trump really won the 2020 election is quintessentially McCarthyist: Trump refused to settle or admit defeat, trying to proclaiming victory before all the votes had been counted and filing dozens of nonsensical lawsuits. Like McCarthy and Cohn, Trump gaslit America. As with McCarthy's claims that he had lists of Communist agents in the government, Trump's empty allegations force his supporters either to take him at his word or reveal their disloyalty — and nobody who wants a career in Republican politics can afford to be disloyal to Trump at the moment. In both cases, proof was no longer needed, and on some level was viewed with scorn. To doubt Joe McCarthy in the early '50s was to become an accomplice to the Communist conspiracy, just as anyone who rejects Trump's Big Lie today is clearly a socialist antifa liberal.

That is how a lie becomes political dogma, a phenomenon also visible in the current right-wing obsession with "critical race theory." Just as McCarthy defined "Communism" so broadly that it lost all meaning, opposition to "critical race theory" has very little to do with the academic approach that term actually describes — but a great deal to do with maintaining white supremacy. Salon's Chauncey DeVega has described it this way:

For today's Republicans, Trumpists and other members of the white right, "critical race theory" is a form of political ectoplasm: It's both a liquid and a solid, something slimy and sticky which can be shaped into whatever frightening or dangerous thing suits their mood and needs in a given moment.
In this political context, "critical race theory" means both everything and nothing; it is a fetish object used to summon up centuries-old racist nightmares and fears about "scary" Black and brown people who are plotting a rebellion or uprising to undermine the (white) family, indoctrinate (white) children and attack (white) America.
By implication, if "critical race theory" and other Black and brown bogeymen are threats to (white) America, then preemptive violence is both necessary and reasonable. Moreover, multiracial democracy is seen, by definition, as incompatible with white people's safety, security and material interests.

In channeling McCarthyism, whether consciously or otherwise, Trump has been successful to a degree McCarthy himself could only have dreamed about. But the connection is clear. While McCarthy was personally discredited, he made it difficult for any prominent American to express unpopular or radical views without being accused of disloyalty or possessing "Communist sympathies." The McCarthyist current has been with us ever since, and as Trump's career demonstrates, has not yet been defeated. If anything, it appears to be winning. Roger Stone is correct, in an upside-down fashion: There is a new McCarthyism in America today, and his pal Donald Trump and his supporters are the ones practicing it.