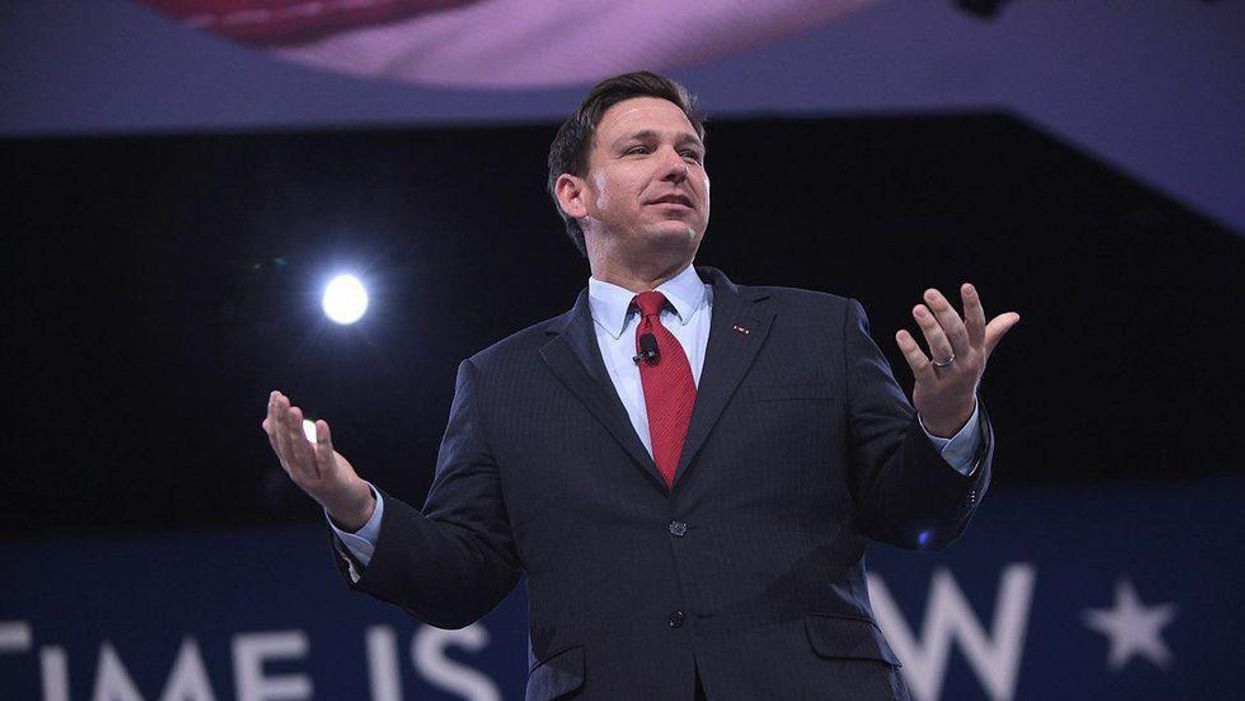 Four days after testing positive for COVID-19, Texas Republican Gov. Greg Abbott reported testing negative over the weekend. As he did so, he credited his own vaccination for keeping the disease in check and plugged getting inoculated.

"I am told that my infection was brief and mild because of the vaccination I received," Abbott said in a video he tweeted out on Saturday. "So, I encourage others who have not yet received the vaccination to consider getting one."

He was "told" the vaccine worked—whoa, new information, the coronavirus vaccines are effective! "So" now, with the benefit of this exclusive knowledge, Abbott bravely stepped forward to share the good news with others. What a guy.

In actuality, from a public health perspective, Abbott has done everything within his power to kill the efficacy of the vaccines to provide mass protection. In April, he signed an executive order banning state agencies and state-funded organizations from requiring any proof of vaccination status. In July, he signed a bill that would punish businesses for requiring proof of vaccination, threatening that they wouldn't be able to contract with the state and could otherwise lose their state licenses or operating permits.

It's little wonder that the state over which Abbott presides has lagged behind the national vaccination rate, with fewer than 50% of its residents fully vaccinated. In April, Abbott claimed his new ban on "vaccine passports" would allow the state to protect the health of its residents "without treading on Texans' personal freedoms."

Instead, four months later, a public health nightmare of Abbott's creation is playing out in the Lone Star State. The state's medical community is scrambling to handle an influx of COVID patients that threatens to exceed the state's worst pre-vaccination surge. As of last week, at least 89 Texas hospitals were entirely out of ICU beds. Hospitals in North Texas are trying to fill their gap in staffing with an influx of hundreds of traveling nurses. This week, some 5,000 reinforcement staff are expected to be deployed across the state, according to Fox 4-KDFW.

In other words, under Abbott's stewardship, Texans' public health is no better off—and may in fact be worse off—than it was before the availability of the vaccines. That's a stunning indictment of a public servant who was given the tools to heal his state and instead turned it into a horror show. Abbott must be thanking his lucky stars for Florida Gov. Ron DeSantis, whose cascading pandemic failures have already made his state the first in the nation to have surpassed its highest daily death toll from pre-vaccination waves.

Perhaps, neither Abbott nor DeSantis imagined the delta surge would be as severe and devastating as it has proven to be when they first began elevating "personal freedom" over public health. But whatever their original political calculations, those assessments have only gotten sicker as the surge has continued to worsen.

Sickest of all is the fact that one group of constituents the likes of Abbott and DeSantis have left defenseless during their individual liberty pandering is children under 12, who are too young to be eligible for the vaccine. Instead of encouraging in-school masking—the most effective mitigation strategy outside of vaccination—Abbott, DeSantis and several other GOP governors have gone to war with schools seeking to implement mask mandates to protect their students and staff.

As disastrous as discouraging inoculation among adults was, working to prohibit mask requirements in schools is unconscionably craven. Republican governors simply didn't have the guts to stand up to the "violent minority" of GOP voters, who think their personal satisfaction trumps the health of every other U.S. citizen, including your child if you have one.

Americans overwhelmingly disagree with that notion in poll after poll. Even in Texas, 65% of residents back vaccine mandates.

But perhaps even more telling, a national USA Today/Ipsos poll pitted personal freedom against public health and guess which one lost: personal freedom. In the survey, 70% of Americans said individuals did have the right not to get vaccinated, but they didn't have the right to be around the vaccinated. In other words, go ahead and do you, but you don't get to do it in public where the reasonable people are looking out for themselves and looking out for their community so everyone can get on with their lives—safely.

The poll also found 72% of Americans called masks "a matter of health and safety" and not an infringement on personal liberty. And by 61% — 39%, respondents supported requiring vaccinations except for those with a medical or religious exemption.

If and when Govs. Abbott and DeSantis make their GOP presidential bids, they will try to have it both ways—saying they supported vaccines because one time they said a nice thing about them (DeSantis once admitted they were "saving lives") while also unfailingly standing up for personal freedom at any and all costs. One of those costs is the lives of kids under 12, who desperately need to be at school, learning in person, and have no choice about whether to take the vaccine.

Abbott, DeSantis, and other Republican governors could have provided the safest environment possible for those kids and their families by encouraging universal in-school masking. Instead, they chose to play Russian roulette with their health and their lives under the guise of freedom. The American public knows better.