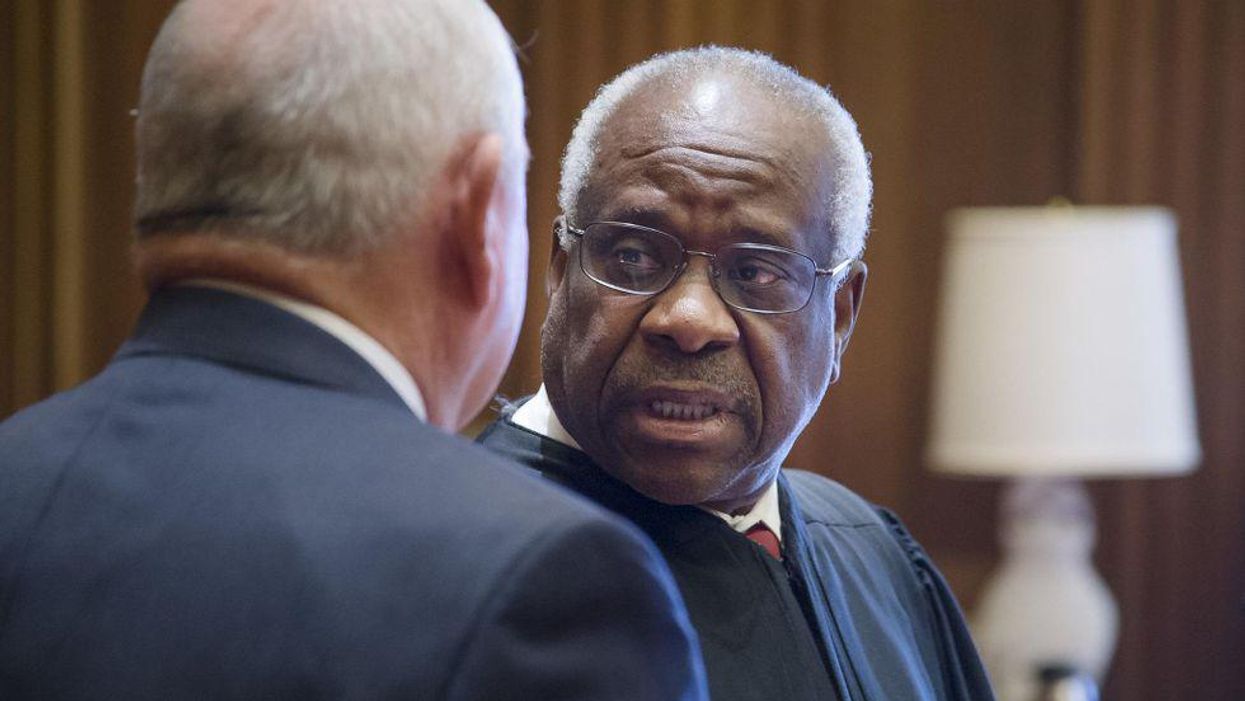 Sonny Perdue is sworn in as the 31st Secretary of Agriculture by U.S. Supreme Court Justice Clarence Thomas with his wife Mary and family April 25, 2017, at the Supreme Court in Washington, D.C.. Photo by Preston Keres
Alex Henderson
August 31, 2021

On Thursday, August 26, the U.S. Supreme Court's right-wing majority blocked the Biden Administration's moratorium on evictions, ruling that if such a moratorium is to continue, it must be authorized by Congress. And the ruling has been inspiring a great deal of discussion on social media.

In its ruling, the High Court's conservatives equated the eviction moratorium with hypothetical requirements for free grocery delivery or free computers — arguing, "Could the CDC, for example, mandate free grocery delivery to the homes of the sick or vulnerable? Require manufacturers to provide free computers to enable people to work from home? Order telecommunications companies to provide free high-speed internet service to facilitate remote work?"

There are, of course, no CDC requirements for "free computers" or "free grocery delivery." And that analogy is receiving its share of mockery on Twitter.

The ruling came down along partisan lines. The six justices appointed by Republican presidents were all in agreement, and the three dissenters were appointed by Democratic presidents: Justice Sonia Sotomayor, Justice Stephen Breyer and Justice Elena Kagan. In their dissent, the Bill Clinton and Barack Obama appointees cited the recent spike in COVID-19 infections in the United States that is being driven largely by the highly infectious Delta variant.

The High Court's conservative majority, in its eight-page opinion, wrote, "Congress was on notice that a further extension would almost surely require new legislation, yet it failed to act in the several weeks leading up to the moratorium's expiration. If a federally imposed eviction moratorium is to continue, Congress must specifically authorize it."

The conservative justices also argued that the moratorium on evictions was unfair to landlords. The Washington Post's Jeff Stein noted:

The justices continue: "Preventing [landlords] from evicting tenants who breach their leases intrudes on one of the… https://t.co/xsdn9zsbpo
— Jeff Stein (@Jeff Stein) 1630348428.0

@JStein_WaPo The conservative Supreme Court Justices: "Whatever interest the Government had in maintaining the mora… https://t.co/6U8DgqqShZ
— Max Kennerly (@Max Kennerly) 1630349807.0

According to attorney Donna Milner:

@MaxKennerly @JStein_WaPo As RBG would famously say… “Throwing out preclearance when it has worked and is continui… https://t.co/uLOzXtglzQ
— Donna Milner (@Donna Milner) 1630355198.0

Central note in Breyer's dissent: the moratorium, compared to other measures the CDC might take (like quarantines),… https://t.co/koEbyNWWxI
— Steven Mazie (@Steven Mazie) 1630027853.0

Here are some more reactions to the High Court's ruling:

@JStein_WaPo Six wealthy elites who've never wanted for any of these things made sure that middle finger to the poo… https://t.co/cAjApLvVBv
— SarahSydney (@SarahSydney) 1630349468.0

@JStein_WaPo You mean basic human decency? Government providing services for their people? No way that can happen. Not in America.
— San Diego Changer (@San Diego Changer) 1630352587.0

@JStein_WaPo But, but, but, THEN, if those things happened, the USA would be functioning like one of those Scandina… https://t.co/g056xPZrCW
— Kathleen Murphy (@Kathleen Murphy) 1630351210.0