When it comes to the climate crisis, the regularity of "the hottest [insert time period here] ever" has become almost monotonous. That's not hard when last year tied for the hottest year on record. And when the year it tied with came just four years earlier. Or when, as NASA reports, the last seven years are the seven hottest years. For seven years in a row, every July has been both the hottest July on record, and also the coolest July going forward. It. Just. Keeps. Getting. Hotter.

So, NPR's reporting of the latest data from NOAA should hit no one as a great surprise—this July set records again. But this July didn't just edge past every other July, it outpaced every other month to capture a new crown: The hottest month in human history. Or at least, it was the hottest month in the 142 years that NOAA has kept records. And while right wing think tanks have been pushing a line that "most of the last 10,000 years" have been warmer than the past century … it will surprise no one that those claims are simply wrong. As NASA's Earth Observatory makes clear, temperatures now are easily warmer than at any time in the last 1,000 years, and there are good reasons to think that record extends back much longer—perhaps longer than human beings have been carving symbols into stone or pressing them into clay tablets.

And we know exactly why. Because in June, the Mauna Loa Atmospheric Baseline Observatory recorded a level of 419 parts per million of CO2 in the atmosphere. That's the highest level ever observed. The highest level since at least the middle of the Pliocene epoch, some 4.1 million years ago.

The information that NASA and NOAA had already released going into 2021 should have been more than enough to make anyone sit up and realize that the climate crisis is a genuine existential threat, one that demands immediate, massive, and urgent action. 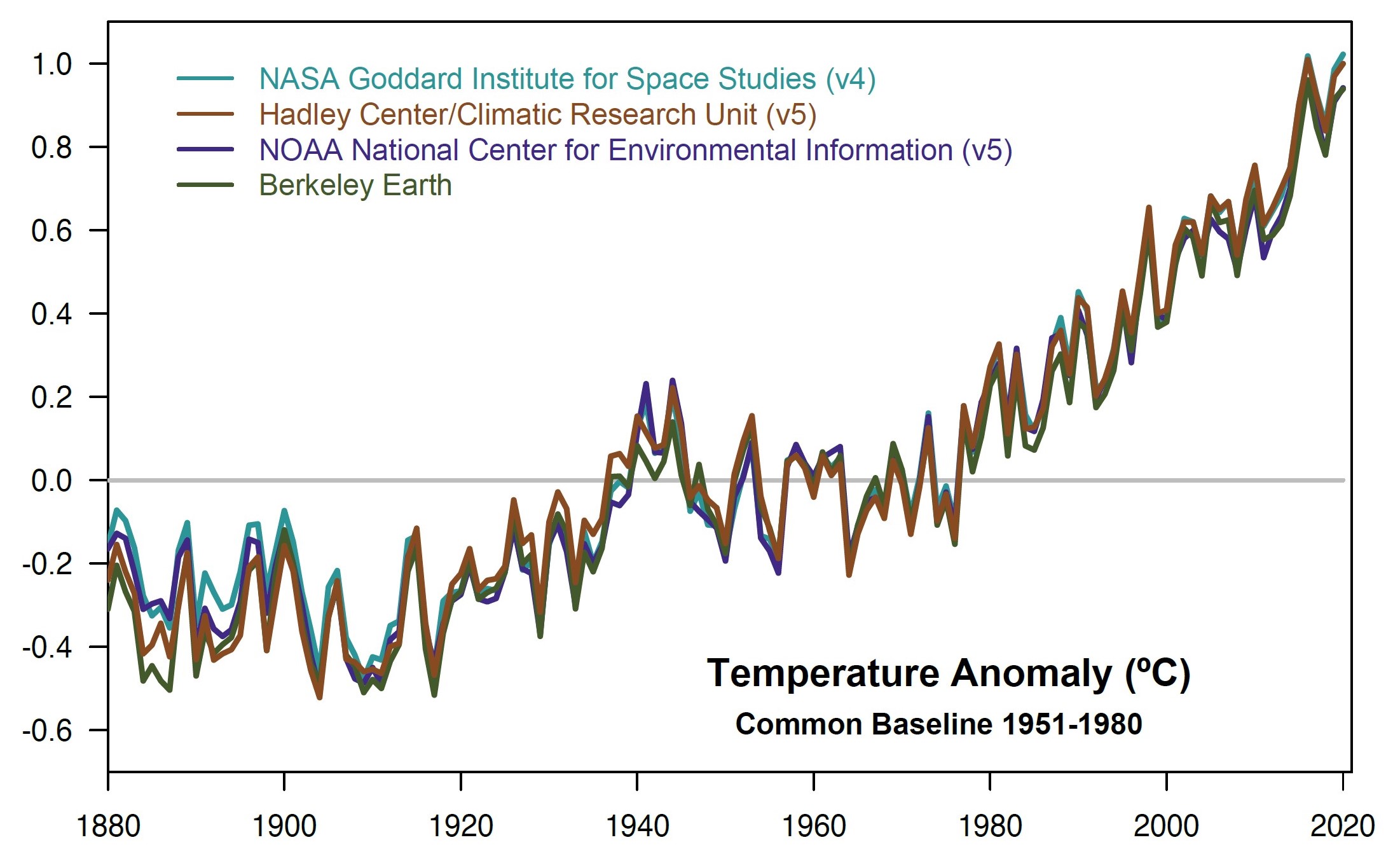 But the news of July's record-shattering temperatures comes just days after the results of the Sixth Assessment Report on the status and effects of the climate crisis. As Reuters reported, that report signals a "code red for humanity." It's not just that the temperatures are now hotter than ever. It's not that they're edging upwards every year. It's that the continued pouring of carbon into the atmosphere is threating to send the climate into a "death spiral" that drives temperatures rapidly upward and causes "deadly heat waves, gargantuan hurricanes and other weather extremes" to become even more frequent and severe.

As it turns out, the NASA chart is really underselling the full impact of what's happened already, because the last century of human-driving climate change is so unusual, that it's hard to put it into context. 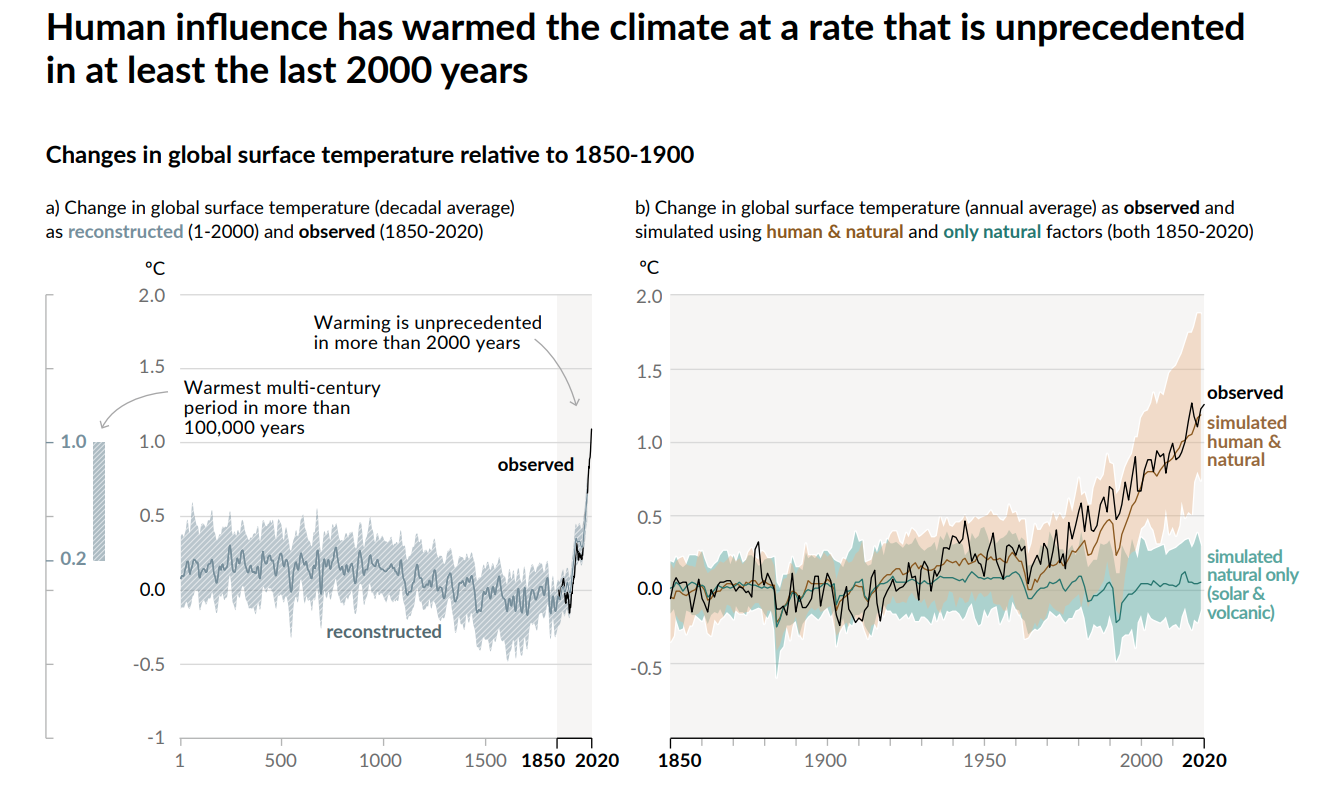 On a longer scale, the severity of this change becomes clear

Not only is the change over the last century severe, the when looked at over a longer term, the unprecedented speed of this change becomes clear. There really is absolutely no doubt that this change is triggered by human activity, and only a change in human activity can address it.

NPR sums up this report in three quick points:

This news also comes right on the heels of a report showing that the Gulf Stream—the ocean current responsible for shifting heat around the Atlantic and which controls weather over a large slice of the planet—is on the brink of collapse. It's long been understood that this was possible, and the failure of the Gulf Stream has been one of the most feared possible effects of melting polar ice and warming seas. Without this redistribution of heat, extreme weather events could become far, far more extreme. Climate could radically shift across Europe, Africa, and Asia. Both rainfall patterns and temperatures could be shifted around the world in ways that destroy agricultural areas, turn forests into deserts, and generate millions of climate refugees.

As The Guardian reported on August 5, the new research found ""an almost complete loss of stability." It confirms that the movement of the Stream is already the weakest in 1,600 years and suggests that a collapse of the system could come in the next decades. Scientists involved in the study indicated that they were surprised by how close the system is to failure. And that they were scared.

They're scared in part because the failure of the Gulf Stream is just one of several major tipping points that are happening, not at some distant time in the future, but right now. That includes the melting of the Greenland ice sheet, the end of the Amazon rain forest as a mechanism for carbon capture, and the increasing release of methane from arctic sources. If it seems like we're being battered constantly by drought, fires, storms, and radical shifts in weather, it's because we are. The cost of these aren't just already higher than what it would take to address the climate crisis, those costs have already included hundreds of lives in the United States in just the last year.

The assessment of the IPCC study is that the best outcome looking forward is a 3.1° F increase in temperature. That's a change that will generate significant, lasting impact, including producing rising sea levels and lasting droughts that could make cities currently home to millions of Americans, and hundreds of millions around the world, unlivable. But at the other end of the scale, the possibility is a world that's 7° warmer in just the next few decades. That's a path to an Earth that's genuinely unrecognizable—and to a future where water, food, and other resources won't just generate refugees, but major conflicts.