On the night of Dec. 12, 2020, the day of the first Stop the Steal rally in Washington and three weeks ahead of the Jan. 6 Capitol insurrection, several guests of then-Rep.-elect Lauren Boebert, R-Colo., received an exclusive after-hours tour of the Capitol building from the far-right firebrand.

There are several unanswered questions about this visit, which appears to have violated normal Capitol protocol in various ways. It's not clear who authorized it, since Boebert was not yet a member of Congress and had no official standing in D.C. It's perhaps even stranger that it occurred on a Saturday night, when the Capitol complex is closed. Later, in the aftermath of the Jan. 6 attack, Boebert repeatedly denied rumors that she had offered "reconnaissance tours" to would-be rioters shortly before that event. But her ambiguous comments appeared to avoid any specific discussion of this unexplained December tour.

According to materials reviewed by Salon, the Dec. 12 tour led by Boebert involved various parts of the Capitol complex, including the staircase in the Senate's empty Brumidi Corridors, Senate room S-127 and the Senate briefing room, as well as the then-vacant Capitol Rotunda.

A maskless Capitol Police officer accompanied Boebert's mother and teenage son to the observation deck at the top of the Capitol Dome for a photo taken by a fourth person, presumably Boebert herself. This is the culmination of any Capitol tour, only available to visitors hosted by a member of Congress, and involves an arduous climb up roughly 300 steep and winding stairs to reach the high perch overlooking the city.

Boebert's guests were clearly enjoying themselves, as can be seen in the photos. But everything about their presence on the observation deck alongside a Capitol Police officer remains unexplained. As mentioned above, the rules for observation deck tours stipulate that a member of Congress and an official guide must accompany each group that climbs the Capitol Dome. There's no indication that either a member or a guide was present on this occasion. 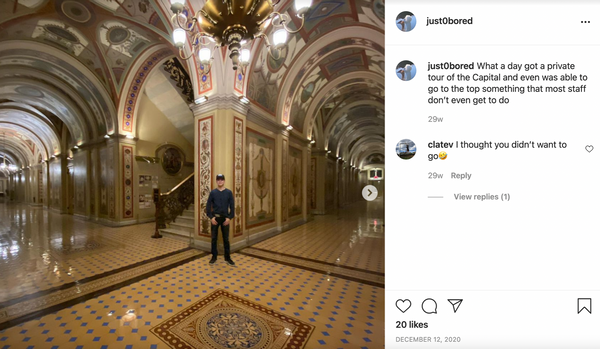 Furthermore, spots for such tours are not readily available, with only eight reservations available on any given day. It's true that Boebert was a member-elect at the time, but that's an important distinction: She certainly was not a sworn member of Congress and had no office, no staff and no official status in the Capitol complex. It's even more puzzling that this tour took place on Saturday night. The guidelines for member-led Capitol tours state they are only available on weekdays from 9 a.m. to 3 p.m., and also that all visitors must sign liability waivers and all tours must be led by official Capitol guides, not Capitol Police officers.

After Rep. Pramila Jayapal, D-Wash., and other lawmakers accused Boebert of "involvement in instigating and aiding the violent riot at the Capitol Building" after Jan. 6, Boebert responded by saying that she hadn't given tours to anyone but her family during the 117th Congress, which began on Jan. 3, the day she was sworn in as a member.

Her choice of words was notably specific, and potentially significant: "I haven't given a tour of the U.S. Capitol in the 117th Congress to anyone but family," she said, specifically not addressing the unauthorized tour she seems to have given during the 116th Congress.

In a January interview with Salon, Boebert denied giving "reconnaissance tours" on Jan. 5, the day before the Capitol assault, saying, "I did not. No." She has issued similar denials to numerous other publications.

This video makes clear that Boebert was in Washington on the day of the first "Stop the Steal" rally on Dec. 12, and also that on Jan. 6 Boebert and her mother visited the Save America rally at around 8:15 a.m., posing for photos with VIPs at the front of the stage.

Jan. 6 rally organizer Ali Alexander can be seen directly behind Boebert in the clip. She is visible in the video for about 10 minutes. Around that time, at 8:30 a.m., Boebert tweeted, "Today is 1776."

The House met at 12 noon that day, and Boebert said on the floor during that session, "Madam Speaker, I have constituents outside of this building right now. I promised my voters to be their voice."

Boebert later told the Daily Sentinel of Grand Junction, Colorado, that her mother took no part in the Capitol insurrection on Jan. 6, declaring, "During the riot, my mother was barricaded inside of my office alongside my staff until the all-clear was given by Capitol Police."

In another report published by the Colorado site News9 after the Jan. 6 attack, Boebert said, "Unfortunately, due to COVID-19, I haven't given any Capitol tours except to show my children around where I'll be working while I'm away from home."

It is unclear whether Boebert or her family members attended the Dec. 12 "Stop the Steal" rally, and exactly how they managed to tour the Capitol Dome that evening without a member of Congress and an official guide. Boebert's office did not respond to Salon's request for comment.