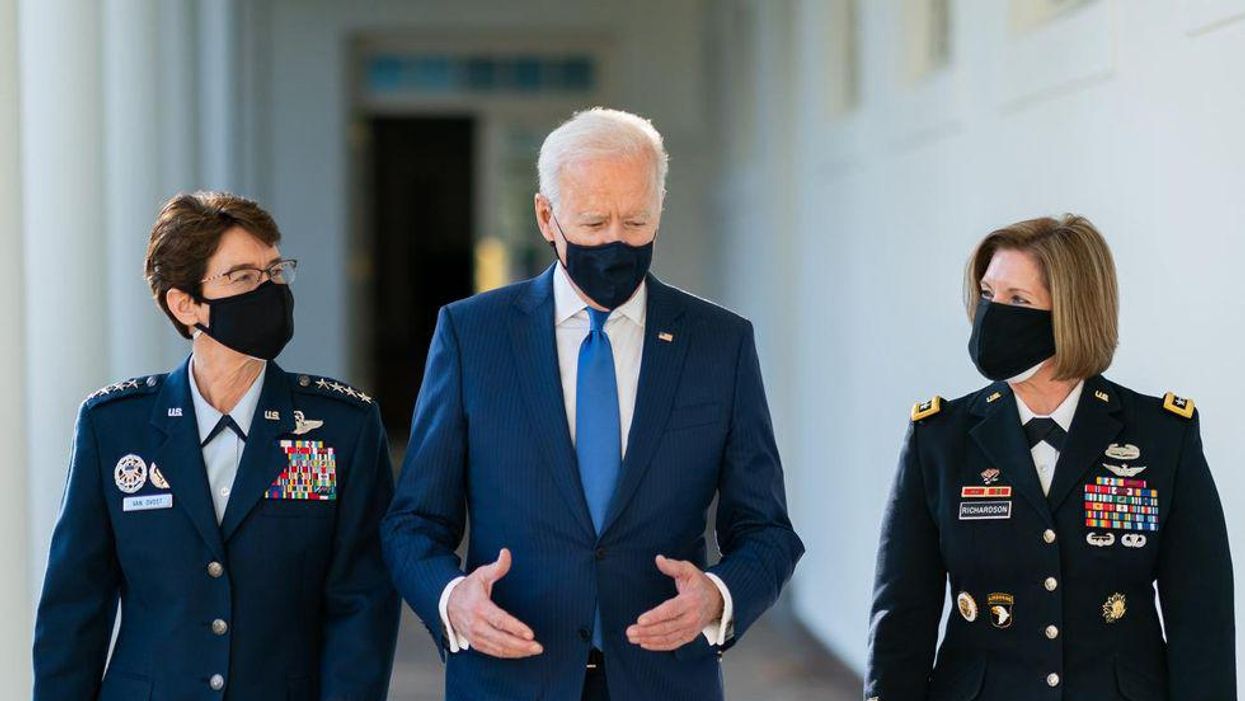 Following a major White House address on Monday for which he was both praised and panned by progressives after explaining his decision to withdraw most American troops from Afghanistan, President Joe Biden was urged to redouble efforts to ensure the safe passage of as many Afghan refugees as possible—especially those who aided the nearly 20-year U.S.-led invasion and occupation of the nation now reverting to Taliban rule.

"I stand squarely behind my decision," Biden declared during a 20-minute speech that came amid the Taliban's chaotic reconquest of Afghanistan. "After 20 years, I've learned the hard way that there was never a good time to withdraw U.S. forces."

"I am deeply saddened by the facts we now face, but I do not regret my decision to end America's warfighting in Afghanistan," the president said. "I cannot and will not ask our troops to fight on endlessly in another country's civil war."

The events we're seeing now are sadly proof that no amount of military force would ever deliver a stable, united, secure Afghanistan as known in history as the graveyard of empires. What's happening now could just as easily happened five years ago or 15 years in the future. We have to be honest, our mission in Afghanistan has taken many missteps, made many missteps over the past two decades. I'm now the fourth American president to preside over war in Afghanistan, two Democrats and two Republicans.

"I will not pass this responsibility on to a fifth president," Biden said. "I will not mislead the American people by claiming that just a little more time in Afghanistan will make all the difference. Nor will I shrink from my share of responsibility for where we are today and how we must move forward from here."

In a stark departure from his predecessor, Biden stated, "I am president of the United States of America, and the buck stops with me," while also acknowledging that the collapse of the U.S.-backed Afghan government "did unfold more quickly than we had anticipated."

While some progressive observers called Biden's speech "honest," "clear-eyed," and a "refreshing" departure from former President Donald Trump, others accused the current president of "finger-pointing" and minimizing U.S. culpability in a crisis nearly 20 years in the making.

Other progressive politicians, journalists, and advocates eschewed lauding or lambasting the president's speech, instead focusing on the urgent need to evacuate and accommodate as many Afghan refugees as possible amid fear of renewed Taliban atrocities, especially against occupation collaborators.

Rep. Ilhan Omar (D-Minn.) responded to Biden's address by asserting that "the urgency of the moment now demands we marshal an international coalition to evacuate every Afghan citizen who is fleeing for their lives."

There will be plenty of time for confronting the repeated failures of Afghanistan policy over the course of 4 presi… https://t.co/9lhHtovrpj
— Rep. Ilhan Omar (@Rep. Ilhan Omar) 1629143800.0

In a statement, Refugee Council USA said that it "calls upon the Biden administration to bring Afghan refugees to safety immediately."

"America's resettlement agencies and other refugee-serving organizations are ready to help and are capable of welcoming many thousands of additional refugees, Special Immigrant Visa recipients (SIVs), and other Afghans in need of protection with the support of local communities," the group added.

Krish O'Mara Vignarajah, president and CEO of Lutheran Immigration and Refugee Service, noted in a statement that "there are still roughly 80,000 Afghan Special Immigrant Visa holders and their families in grave danger—not to mention the tens of thousands in other vulnerable populations, including journalists, women's rights activists, NGO workers, and others."

"To frame the perspectives on U.S. withdrawal as either 'stay in a forever war' or 'save our allies' is a false dichotomy," O'Mara Vignarajah added. "We are simply calling on the administration to keep our promise. Our allies protected us, and in turn, we vowed to protect them. We call upon President Biden to immediately evacuate all U.S. citizens, American-affiliated Afghans, and other vulnerable populations."

The National Iranian American Council called for "immediate steps to support Afghans on the ground and save as many lives as possible," as well as "a shift away from militaristic policies and toward diplomacy-centric approaches that protect human rights and our shared humanity."