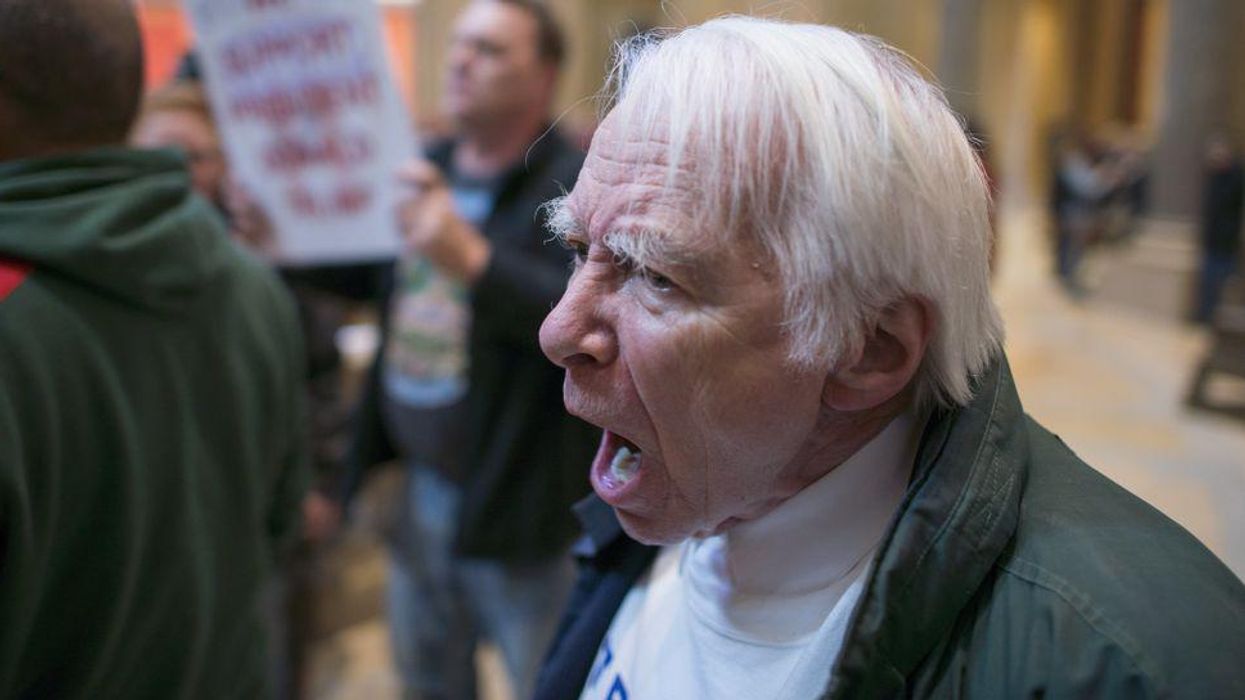 March 4, 2017 // About 700 people gathered at the Minnesota capitol building to show support for Republican President Donald Trump. This was part of "March 4 Trump events around the country. Around 100 people were also there protesting against Donald Trump. // This man was yelling, "TRUMP! TRUMP! TRUMP! TRUMP! TRUMMMMMP!" // 2017-03-04 This is licensed under the Creative Commons Attribution License. Credit: Fibonacci Blue
Alex Henderson
August 06, 2021

Some far-right pundits who are critical of House Speaker Nancy Pelosi's select committee on the January 6 insurrection have argued that Democrats simply need "get over it" and move on rather than continue to dwell on what happened seven months ago. But one of the problems with that argument is that insurrectionists themselves haven't gotten over the 2020 presidential election, buying into the Big Lie and the debunked conspiracy theory that the election was stolen from former President Donald Trump. And a troubling University of Chicago study finds that almost one in ten Americans favor violence in order to put Trump back in the White House.

The study was conducted for the University of Chicago's Project on Security and Threats, which — according to Robert Pape, a political science professor — "has been updating its demographic studies of the nearly 600 Americans arrested for the January 6 attack to build as complete and current a picture as possible of this mass political movement with violence at its core."

"One might have expected fires to fade, the FBI arrests to have a chilling impact on violence to support Trump, or the deplatforming of Trump himself from Facebook and Twitter to lower the temperature," Pape explains. "But our most recent nationally representative survey of 1070 American adults fielded by the National Opinion Research Council…. found, most strikingly, that 9% of Americans — believe the 'use of force is justified to restore Donald J. Trump to the presidency.'"

Pape continues, "More than a fourth of adults agree, in varying degrees, that 'the 2020 election was stolen, and Joe Biden is an illegitimate president.' We also learned that 8.1% — that equates to 21 million American adults — share both these radical beliefs. From a statistical point of view, this number is extrapolated from a range between 6% (15 million) to 11% (28 million), where we have 95% confidence that the true number falls within."

Pape notes that the Project on Security and Threats found a "remarkable consistency in the responses."

"Of the roughly one tenth of those who think force is justified to restore Trump," Pape reports, "90% also see Biden as illegitimate, and 68% also think force may be needed to preserve America's traditional way of life."

Pape adds, "Today's 21 million adamant supporters of insurrection also have the dangerous potential for violent mobilization. Our survey also asked pointed questions about membership and support for militia groups, such as the Oath Keepers, or extremist groups, such as the Proud Boys, to which approximately, 1 million of the 21 million insurrectionists are themselves or personally know a member of a militia or extremist group."

Moreover, Pape warns, the Project on Security and Threats found that among "adamant insurrectionists," 63% believe in the Great Replacement and 54% support QAnon. The Great Replacement, which Fox News' Tucker Carlson has promoted on his show, is a far-right conspiracy theory claiming that people in federal governments are plotting to "replace" whites with non-whites. And QAnon believes that the federal government of the United States has been infiltrated by an international cabal of child sex traffickers, pedophiles, Satanists and cannibals and that Trump was elected president in 2016 to fight the cabal.

"Without a sound risk analysis of the drivers of American political violence," Pape writes, "it is hard to see how developing policies, far less strategies to mitigate the risk of future election-related violence, could be genuinely possible."