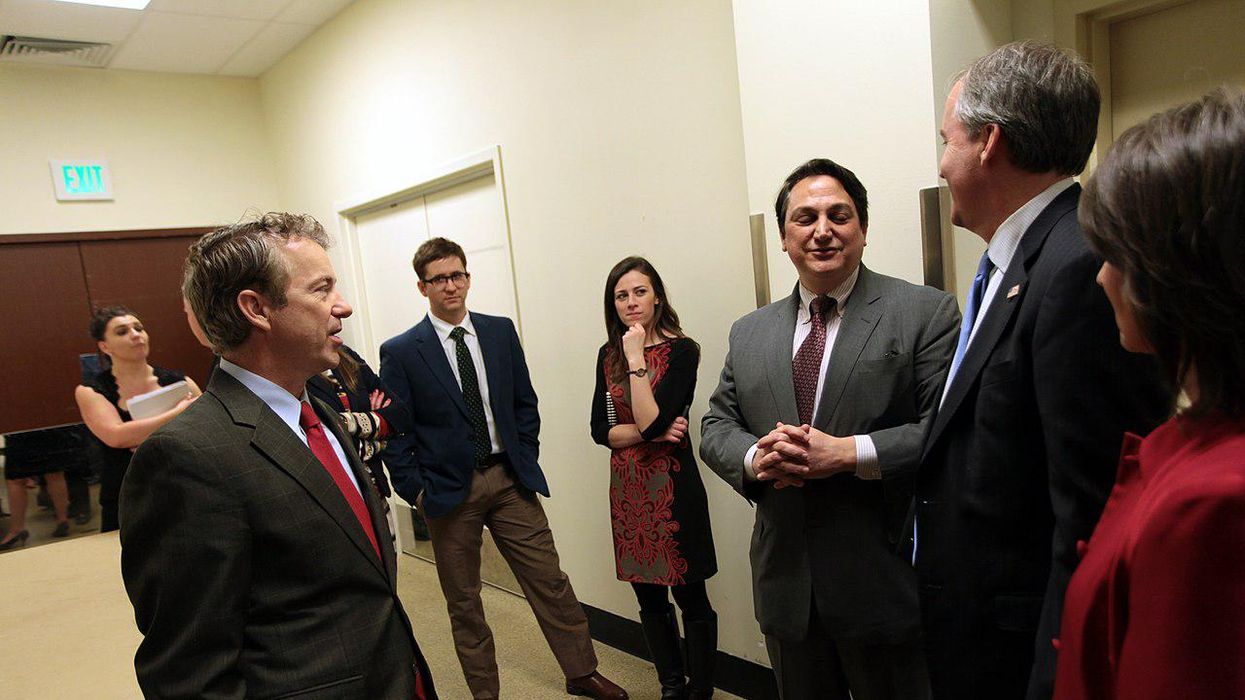 Far-right Texas Attorney General Ken Paxton showed his authoritarian mindset when, in December 2020, he filed a ridiculous lawsuit asking the U.S. Supreme Court to throw out millions of votes in four states that Joe Biden won: Pennsylvania, Michigan, Georgia and Wisconsin — a lawsuit so flawed that even the most right-wing Supreme Court in generations rejected it. But as embarrassing as that lawsuit was, it is only one of many shameful things in Paxton's history — and the Houston Chronicle's editorial board, in a scathing editorial published this week, lays out some reasons why Paxton's departure would be a blessing for the Lone Star State.

The editorial explains that 16 Texas-based attorneys, including four former Texas Bar presidents, recently signed a 31-page complaint against Paxton with the Texas State Bar. That group is calling itself Lawyers Defending American Democracy and would like to see Paxton either suspended or permanently disbarred.

"We just want him gone," the Chronicle's editorial board declares. "A quick Paxton primer underscores why."

The editorial board adds that in 2015, Paxton was "indicted on felony securities fraud charges" but "still hasn't gone to trial." And the board goes on to note that Paxton has been a relentless promoter of the Big Lie — the false claim that former President Donald Trump was the real winner of the 2020 election and that the election was stolen from him through widespread voter fraud.

"Paxton took it upon himself to file a howler of a lawsuit with the U.S. Supreme Court seeking to toss the 2020 presidential election results in four battleground states that had assured Joe Biden's victory," the Chronicle's editorial board explains. "His own solicitor general wouldn't even sign it. The lawsuit, soundly rejected, relied on discredited claims of election fraud. Keep in mind that Paxton uses our money to make himself and his state a national laughingstock."

After the lawsuit debacle, Paxton continued to promote the Big Lie when he spoke at Trump's "Stop the Steal" rally in Washington, D.C.

"A little over six months ago," the Chronicle's editorial board observes, "our attorney general stood before a roiling crowd at the White House and urged supporters of then-President Donald Trump to keep fighting. 'We are Texans, we are Americans, and we're not quitting,' he shouted. Later that day, January 6, Paxton claimed — with a straight face — that the mob that invaded the Capitol a few hours earlier were liberal Antifa activists, not Trump supporters."

Lawyers Defending American Democracy co-founder Gary Ratner, in the group's anti-Paxton letter to the Texas Bar, write, "Mr. Paxton's misconduct has brought dishonor not only to his fellow Texas lawyers, but to the American legal profession as a whole. After investigation, if the allegations in this complaint are validated, Mr. Paxton should be suspended from the practice of law or be permanently disbarred."

The Chronicle's editorial board points out that even Republican Rep. Chip Roy, formerly Paxton's top aide, is urging him to resign.

"For the good of the state he serves, Paxton should have had the decency to resign months ago," the Chronicle's editorial board writes. "He didn't and he doesn't, which means Texans likely will have to endure a non-functioning AG's office for months to come — assuming that Texas Republicans have finally seen the light. Here's hoping the water gets even hotter."