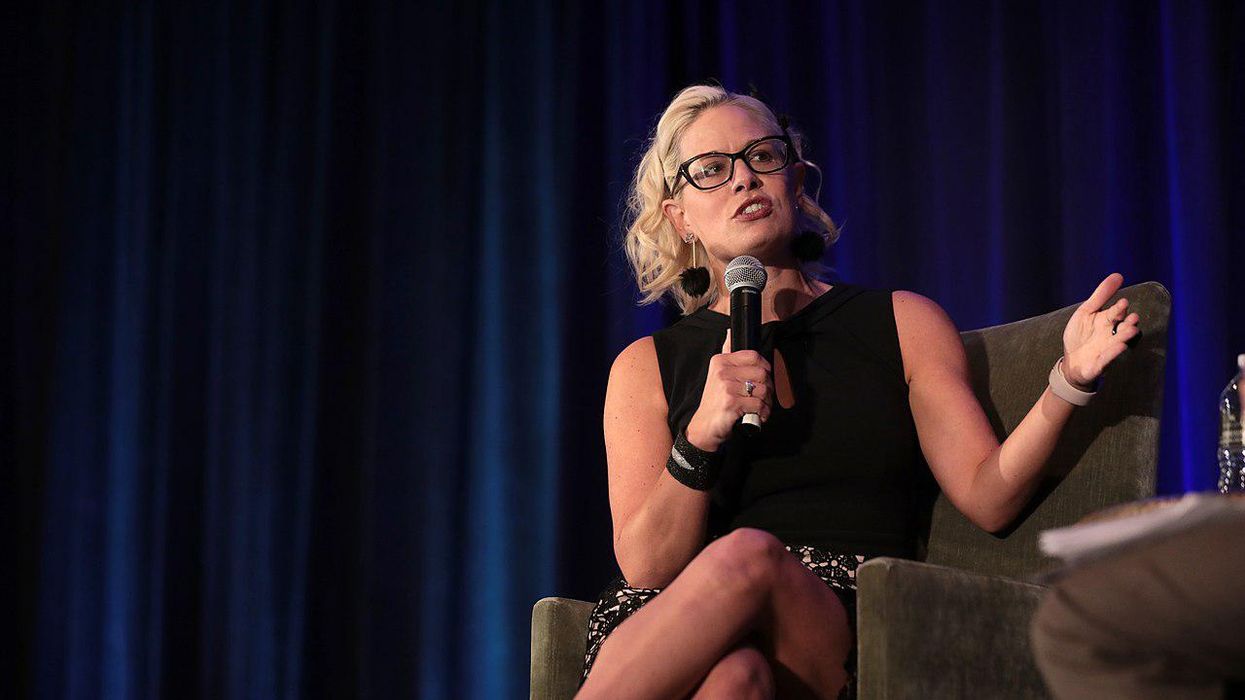 Sen. Kyrsten Sinema of Arizona speaking with attendees at the 2019 Update from Capitol Hill hosted by the Arizona Chamber of Commerce & Industry at the Arizona Biltmore Resort in Phoenix, Gage Skidmore.
Alex Henderson
July 21, 2021

Centrist Sen. Kyrsten Sinema of Arizona has recently drawn a great deal of criticism from more progressive Democrats for her opposition to ending the filibuster, and a new poll from the progressive think tank Data for Progress finds that two-thirds of Democratic primary voters in her state would favor a primary challenge to Sinema in 2024 if she maintains that position. But the poll raises some questions: how do centrists, conservatives and independents feel about Sinema in Arizona? And how would a more progressive Democrat fare against a Republican candidate in Arizona's 2024 U.S. Senate race?

Sinema, along with Sen. Joe Manchin of West Virginia, has been adamant in her opposition to ending the filibuster, which requires at least 60 votes for most bills to pass — including voting rights bills such as the For the People Act and the John Lewis Voting Rights Advancement Act. Democrats have a narrow majority in the U.S. Senate, but they don't have 60 votes. Sinema, who was elected to the U.S. Senate when she defeated Republican Martha McSally in 2018, has argued that Democrats will be glad to have the filibuster if Republicans regain the Senate and the White House in the future. And some Democrats have responded that if Sinema and Manchin are opposed to ending the filibuster altogether, they should at least support creating an exception to the filibuster when it comes to voting rights — which Republicans in state legislatures have been attacking with voter suppression bills all over the United States.

On July 20, Brian Burton and Gustavo Sánchez of Data for Progressive cited Sinema's support of the filibuster as the reason why she is, according to Data's poll, vulnerable to a possible Democratic primary challenge in 2024. The poll was conducted from June 28 to July 6.

According to Burton and Sánchez, "These potential primary voters are already revealing the policy priorities and deal-breakers that may decide their vote. Particularly salient among them is the voters' desire to eliminate the filibuster. Among likely Democratic primary voters, 66% have said that they would vote for another candidate who will champion filibuster reform compared to only 22% who would reelect Sen. Sinema should she continue to preserve it. As previously noted, her voting record up to this point would already place her in a relatively weakened position in a hypothetical primary challenge. If she remains steadfast in her resolve to protect the filibuster, regardless of reason, it seems quite likely that she will further push her base towards another candidate entirely."

But if a staunch progressive — someone along the lines of Rep. Alexandria Ocasio-Cortez of New York City, Rep. Pramila Jayapal of Washington State or Rep. Ilhan Omar of Minnesota — were to defeat Sinema in a Democratic primary in 2024, could that person defeat an Arizona Republican in the general election? Other polling has indicated that while progressive Democrats are critical of Sinema, she fares better among centrists, independents and conservatives.

In 2024, Sinema will not be running a House race in a liberal, overwhelmingly Democratic district in New York City, Seattle or Philadelphia — she will be running a statewide race in Arizona, which was deeply Republican for many years but has evolved into a swing state.

For decades, Arizona was synonymous with the right-wing conservatism of Sen. Barry Goldwater and his successor, Sen. John McCain — a self-described "Goldwater conservative." But Democrats have enjoyed three major statewide victories in Arizona in recent years — first Sinema's victory over McSally in 2018, followed by Sen. Mark Kelly's victory over McSally in 2020 and President Joe Biden's Arizona victory over former President Donald Trump in 2020. Arizona now has two Democratic U.S. senators, which is downright shocking to older Arizona residents who remember how Republican the state was for so long. And when Sinema praises McCain as her political idol, that goes over well with centrists, independents and Never Trump conservatives in her state.

Although the Data for Progress poll indicates that Sinema is vulnerable to a primary challenge in 2024, she fares better in polls that are less progressive. A recent Bendixen/Amandi International poll found that among registered voters in Arizona, those who have a "favorable" view of her include 52% of Democrats and 51% of Republicans.

That poll asked, "Do you approve or disapprove of the manner in which Kyrsten Sinema is handling her job as United States senator?" Those who "approve" included 54% of Republicans, 47% of Democrats and 46% of independents. But when the subject of the filibuster comes up, one finds quite a disparity. Bendixen/Amandi asked, "Do you support or oppose Sen. Sinema's decision to maintain the filibuster in the U.S. Senate?" Only 21% of Democrats supported Sinema on the filibuster compared to 75% of Republicans and 51% of independents."

These are the challenges that Sinema faces in 2024, when she may have to worry about a possible primary challenge from the left as well as how to defeat a Republican if she makes it to the general election.