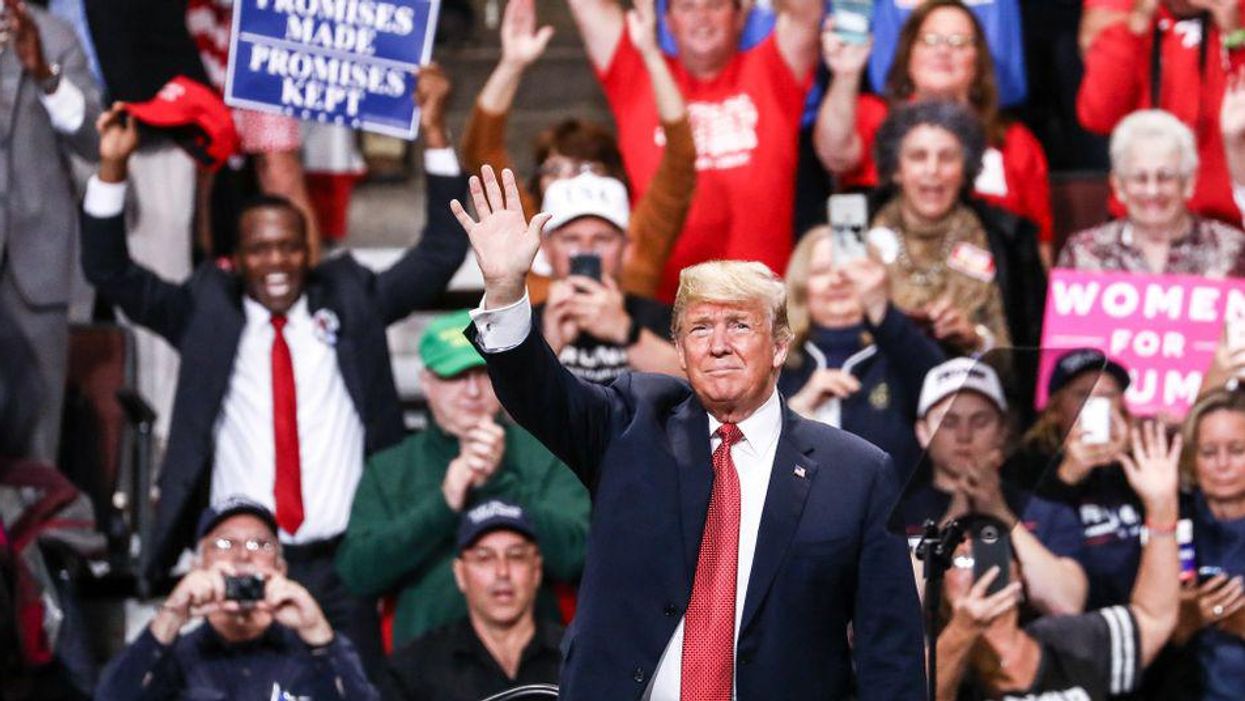 Although former President Donald Trump was decisively voted out of office in 2020 and has been gone from the White House for almost six months, he continues to be the most influential figure in the Republican Party. Countless GOP politicians are afraid to publicly say a word against him, and his MAGA rallies still attract unquestioning, cult-like followers. Wall Street Journal reporter Michael C. Bender examines the type of MAGA devotees who faithfully attend those rallies in an excerpt from his book, "Frankly, We Did Win This Election: The Inside Story of How Trump Lost."

The Washington Post published an excerpt from the book this week, and in the excerpt, Bender discusses a "group of Trump's most hardcore rallygoers" known as the Front Row Joes.

Bender says of the Front Row Joes he has interviewed, "They were mostly older White men and women who lived paycheck to paycheck with plenty of time on their hands — retired or close to it, estranged from their families or otherwise without children — and Trump had, in a surprising way, made their lives richer. The president himself almost always spent the night in his own bed and kept few close friends. But his rallies gave the Joes a reason to travel the country, staying at one another's homes, sharing hotel rooms and carpooling."

One of the Front Row Joes that Bender interviewed was Saundra Kiczenski, a 56-year-old Michigan resident who traveled to Ohio for a MAGA rally in June. Discussing the January 6 insurrection — which she obviously views falsely as a peaceful protest — Kiczenski told Bender, "It's ridiculous those people are in prison for no reason. And it's a shame because if Donald Trump were still the president, they'd all be free."

Yet despite saying there was no reason the rioters should be in prison, she was open about the real motivation behind the event.

The COVID-19 pandemic, according to Bender, did not discourage Front Row Joes from traveling around the U.S. for MAGA rallies in 2020. The Joes, Bender observes, fully embrace "alternative facts" — whether it's the claim that COVID-19 isn't dangerous or the bogus claim that now-President Joe Biden stole the election.

"While most Americans only occasionally left their homes, the pandemic proved a blessing for Kiczenski's Trump travel plans," Bender explains. "She bought cheap airfare, repeatedly basked in the extravagance of an airplane aisle all to herself and logged more flights in 2020 than at any other point in her life. She attended 25 Trump rallies, boosting her total to 56. She spent 79 nights of the year away from her bed. Kiczenski traveled so often during the pandemic that a Delta flight attendant thanked her for being a Silver Medallion member and upgraded her to first class; she initially assumed it was a mistake."

Not surprisingly, Kiczenski buys into the Big Lie — continuing to believe the false, debunked claim that Trump was a victim of widespread voter fraud in 2020.

Kiczenski told Bender, "If someone put a gun to my head and said: 'Did Donald Trump win, yes or no? And if you're wrong, we're going to shoot your head off!' I would say yes. I'm that confident that this stuff is not made up."