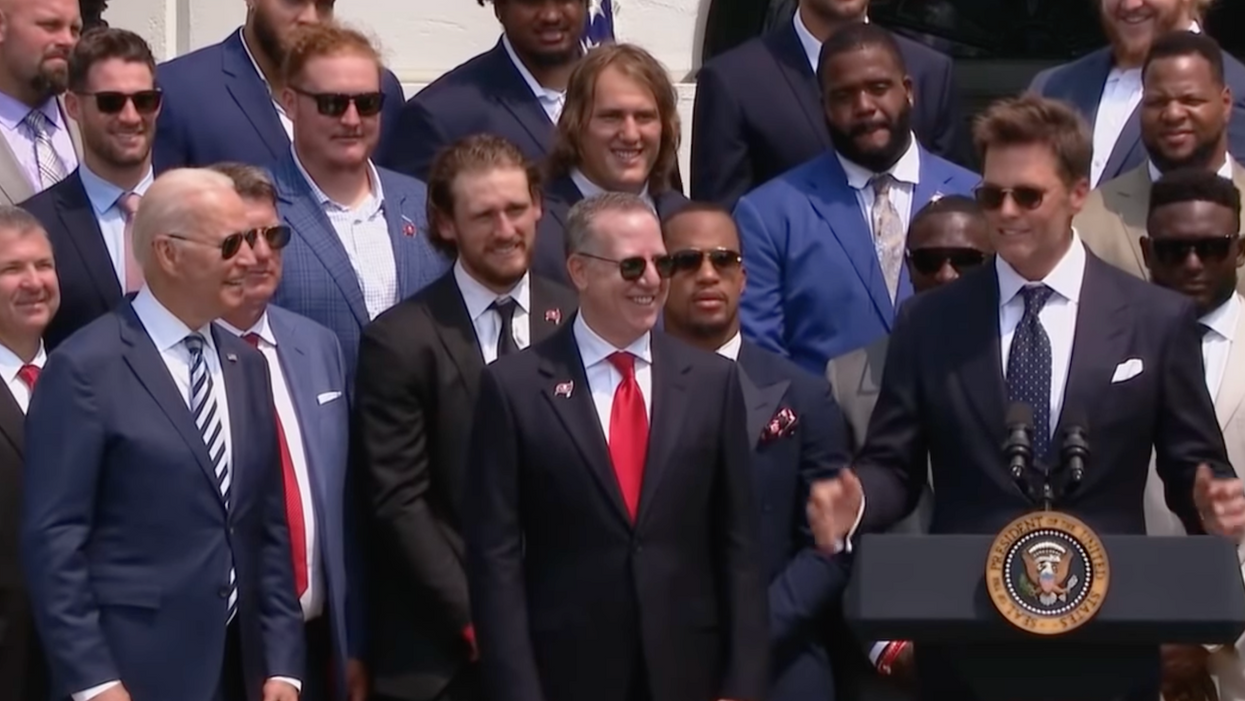 Joe Biden and Tom Brady make a mockery of Trump's election conspiracy theories
David Badash
and
The New Civil Rights Movement
July 21, 2021
NFL giant Tom Brady, who has led his team to a total of seven Super Bowl championships, celebrated at the White House Tuesday with President Joe Biden and his fellow Tampa Bay Buccaneers players. Brady was a supporter and personal friend of the former president, Donald Trump, and even had a MAGA hat in his locker several years ago. Since the 2016 election he has described their friendship as "uncomfortable," but draws a line between politics and friendship, saying he was taught to support his friends, and has stayed away from political remarks. Some wondered if Brady would show up today at the White House celebration, but he did, and despite his feelings for the former President, even took a swipe at Trump and election-deniers. “Not a lot of people think we could have won, in fact, 40 percent still don't think we won," Brady joked as he spoke at the podium. "You understand that, Mr. President?" The 43-year old quarterback was referring to those Republicans who polls say believe the 2020 election was fraudulent and Trump won. Trump has been spreading those lies since before the election. To pound his point home, Brady even joked that the one time in his entire career he forgot which down they were on. "I lost track of one down in 21 years of playing," he told the crowd. "And they started calling me 'Sleepy Tom,'" a reference to Trump's name for President Biden during the campaign, "Sleepy Joe." "How could they do that to me?" Brady, taking off his sunglasses and looking at the president said, jokingly, which Biden clearly enjoyed. Watch:

Tom Brady at the White House: “Not a lot of people think we could have won, in fact, 40 percent still don't think we won.

The Washington Post notes this is "the first time since 2017 [that] an NFL team is visiting the White House to mark its Super Bowl victory with the president and, for the first time in 16 years, Tom Brady joined his teammates for the occasion."
From Your Site Articles
Related Articles Around the Web
Report typos and corrections to: feedback@alternet.org.
#story_page_ below_article