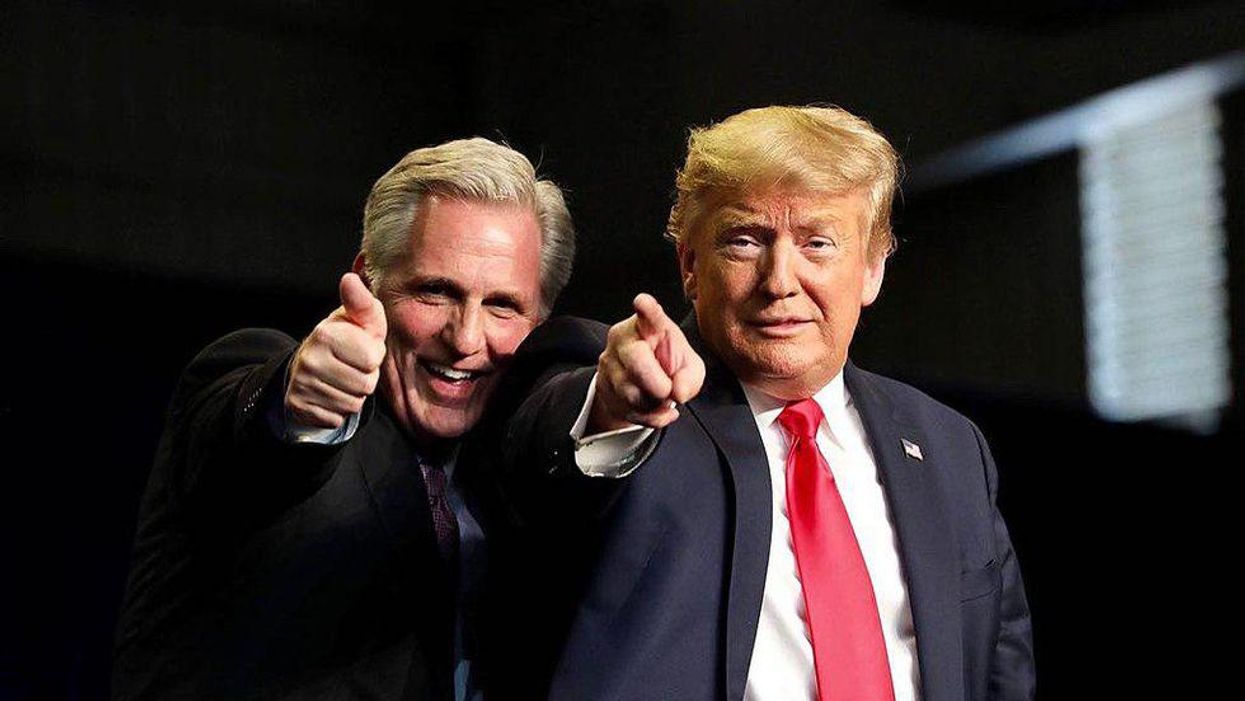 Maybe they think, not unreasonably, that political history is on their side. After all, the party out of power usually takes one or both chambers of the United States Congress during a president's first term. The electorate has often behaved as if it were seeking a balance of power, so that one party doesn't have too much and the other too little.

Or maybe the Republicans believe they don't need history. After all, colleagues at the state level are exploiting the losing president's complaint about having lost as a result of voter fraud. They have passed reams of election laws to address a crime that rarely happens, but whose effect will almost certainly be the suppression of non-white votes. Maybe the Republicans think they can stick with the losing president and still win.

The question of whether the Republicans are taking an enormous risk sticking with a losing president has not gotten nearly the attention it deserves. I mean, imagine if the Democratic Party had stuck with Hillary Clinton or John Kerry or Al Gore or Michael Dukakis. I say "what if," but it's really not imaginable to ask "what if," because there's no way in hell the Democratic Party would have done that. Why? Because they lost!

Sure, Donald Trump lost by a hair, but you know what? So did Hillary Clinton and John Kerry and Al Gore. They lost and the Democrats said thanks for your service before sending them to pasture. It seems the press and pundits corps are not nearly as skeptical of the Republican Party going all-in with the losing president as they would be had the Democratic Party gone all-in with a losing candidate. Fact is, they should be even more skeptical. An incumbent president almost never loses! That Donald Trump lost at all should tell us something huge: that the electorate has changed.

How has it changed? I don't have an answer. I'm in the stream of history, the same as you. But it seems to me that when an incumbent president loses, especially when a Republican incumbent loses, that that indicates the need to reassess things we thought were so true we never stopped to wonder if they're still true. One of the things we think is true, and that we have not stopped to wonder if it's still true, is the party in power always experiences a backlash. That's why the out-party wins the midterms.

History seems to be on the side of backlash. It happened in 1994, 2006, 2010 and 2014. If you're a betting person, backlash is a sound bet. But history does not repeat itself. None of these midterm backlashes happened in the wake of an incumbent having his ass handed to him, nor in the wake of an attempted coup d'etat, nor in the wake of a once-in-a-century pandemic that will kill a million before it's over because the losing president's supporters keep sabotaging the recovery. The Republicans, in going all-in with a losing president, seem to be hoping the electorate has a very short memory. Matter of fact, the Republicans seem to be banking on the idea that history is as stuck in time as the Republicans are stuck with a losing president. Consider "law and order."

Most people are familiar with "law and order," because the Republicans have been calling for it since Richard Nixon's reelection campaign in 1972. Recent spikes in crime rates have given Republicans a reason to think the old slogan will work again. A strategist told the AP he expects the Democrats "to remain on the defensive" while the Republicans blame them for rising crime. Sure, he said, the Republicans are behaving badly with respect to the investigation into the January 6 insurrection, but that only gives the Democrats a way of distracting "from some of their real shortcomings."

Here's what I draw from that. Some Republicans think they can call for "law and order" and no one will remember the disgraced former president's attempt to overthrow the republic by sending paramilitaries to the United States Capitol. Voters have notoriously short memories, but they're not that short! Moreover, "law and order" includes putting down sedition. It includes bringing insurgents to justice. Treason is a crime. If anyone is going to be the party of "law and order," well, it's not the GOP.

Furthermore, the very people who enforce "law and order" are feeling betrayed. The party of "law and order" has abandoned them. US Capitol Police Sgt. Aquilino Gonell, a Army veteran, said as much during his testimony this week. "You're talking about people who claim that they are pro-law enforcement, pro-police, pro-law and order," he said. "Yet when they have the chance and the opportunity to do something about it, to hold people accountable, you don't, you pass the buck, like nothing happened."

My point isn't that stale messaging will prevent the Republicans from winning the midterms. My point is the presumption of a backlash delivering for the Republicans is just that, a presumption. It is not ordained. It needs reconsidering. Matter of fact, there's a presumption inside that one: that the beneficiaries of midterm backlash are going to be the Republicans this time around. It very well could be the opposite. And yet virtually no one has questioned the wisdom of going all-in with a losing president.